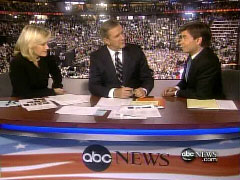 Sarah Palin's Wednesday night Republican convention speech was widely greeted with praise from television commentators and the short break between her address and Rudy Giuliani's beforehand didn't leave much time for analysis of Giuliani's, but ABC's George Stephanopoulos managed to find a dark side to both while ABC's Nightline devoted a six-minute story to “new details tonight on a brewing controversy in Alaska,” a “nasty family scandal that's come to be called trooper-gate.”

Following Giuliani's speech, Stephanopoulos declared it “far and away the toughest speech we've seen so far” at both conventions and ruminated: “What I wonder about is how it came across on television. A little too nasty? A little too ugly? I don't know.” After Palin finished, he  fretted that she “she also spent a lot of time attacking” and “that could come off as quite negative to some viewers.”

Issuing the Nightline “Report Card,” Stephanopoulos, who a week earlier awarded Joe Biden and Democrats four A's, gave Giuliani and Palin three A's, a B and a C. For “Red Meat,” he presented an A “for substance,” but a C “on delivery” because he contended their repeated mention of how Barack Obama was a “community organizer” came across as “a little too derisive.”

(A week ago, Stephanopoulos hailed Biden's “red meat” performance: “Another A. And this was Joe Biden, and what he did tonight was lay out the case the Democrats have to make in the fall on both the economy, the necessity for change and foreign policy. For Democrats, they want to be arguing the question is not experience, but judgment.”)

Over on CBS in prime time Wednesday night, Democratic analyst Joe Trippi, a veteran of the Dean and Edwards campaigns, could have been addressing the journalists hostile to Palin as he argued that “if you're the Democrats right now, you're taking this thing a lot more seriously.” Trippi asserted:

She passed this test with flying colors, but this one was controlled, a crowd that adored her with a tele-prompter. Now she has to go out, face the press, answer their questions, see how she does against Joe Biden. But if you're the Democrats right now, you're taking this thing a lot more seriously. This woman handled the task at hand with flying colors.

Tom Brokaw was generally positive in assessing Palin's performance on NBC's extended prime time hour, but he couldn't resist raising a controversy as he promised journalists will equally scrutinized the Democratic ticket:

We are learning more about her every day. She has been an enormously popular Governor up there, but, in fact, tonight when she talked about opposing the “Bridge to Nowhere,” she was in favor of it until Congress decided that Alaska would have to pick up the rest of the tab. So there are those issues that legitimately need to be examined, just as there are with Joe Biden and Barack Obama, and we’ll continue our role.

Back to ABC, and its Wednesday night, September 3 hour-plus coverage starting at 10 PM EDT for which the MRC's Rich Noyes provided me with guidance:

Stephanopoulos between the speeches by Giuliani and Palin:

The toughest of the last two weeks. Far and away the toughest speech we've seen so far. And Charlie, I have to say I'm of two minds listening to it I have to tell you. Reading those attacks on Barack Obama. Those are tough, well-thought out attacks. The Obama campaign is going to have to answer. What I wonder about is how it came across on television. A little too nasty? A little too ugly? I don't know.

After Palin, Stephanopoulos conceded “there were a lot of beautiful and effective lines,” but he warned:

(In contrast, CBS's Jeff Greenfield admired Palin's application of humor: “The use of humor was one of the most effective things. If you were to tear down an opponent you could do it like Rudy Giuliani, with a sword, with a knife, or you can do it like Governor Palin did with this touch. Every time she went, it was with humor, Katie. Very good technique.”)

The Nightline “Report Card” from Stephanopoulos on Wednesday night:

Winning Them Over: A (for Palin)

Filling in the Blanks: B (will Palin's Alaska record hold up?)

Red Meat: A for substance, C on delivery

Turning the Page: A (away from Bush)

His explanation for his “Red Meat” grades: 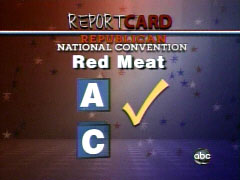 STEPHANOPOULOS: They get two grades. A for substance, C on delivery. Here's what I'm talking about. Rudy Giuliani and Sarah Palin put a lot of tough attacks on the table tonight that Barack Obama is going to have to answer. What I wonder about is in the delivery sometimes did they go too far. Watch Rudy Giuliani on Barack Obama's experience as a community organizer.

RUDY GIULIANI, IN CONVENTION SPEECH: On the other hand, you have are resume from a gifted man with an Ivy League education. He worked as a community organizer. What?

STEPHANOPOULOS: They must have mentioned it five or six times. A little too derisive. My guess is that the Obama campaign is going to hit back and his allies will hit back very hard against it.

Earlier in the program, Nightline devoted a lengthy six minutes to a Brian Ross report, couched as delivering “new details tonight” about the so-called “trooper-gate” story. The MRC's Brad Wilmouth provided a transcripts of the set up to the story and start of the piece:

CYNTHIA McFADDEN: Imagine last week Sarah Palin was the popular Governor of Alaska, one of the least populated states in the nation. Tonight, she spoke as John McCain's candidate for Vice President. The crowd here in this arena tonight is almost twice the size of the town in which she was once the proud mayor. But, with a new status, comes a new scrutiny. ABC’s chief investigative correspondent Brian Ross has new details tonight on a brewing controversy in Alaska. Brian? 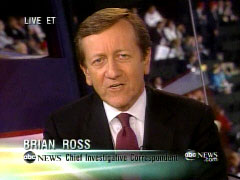 BRIAN ROSS: Cynthia, while Sarah Palin was speaking here, there were new developments in the state ethics investigation of the overnor back in Alaska. A state senate committee is looking into charges she abused her office and fired the state's public safety commissioner as part of a nasty family scandal that's come to be called troopergate. It's a local scandal that's become national news. A family feud and allegations of lies and cover-up that were big news in Alaska, but unknown to the rest of the country until Sarah Palin became a national figure. The trooper in troopergate is the ex-husband of the governor's sister, Mike Wooten, accused of making threats against his former in-laws. The allegation against the governor which she denies is that she wanted Wooten fired, and pushed the public safety commissioner to do it....