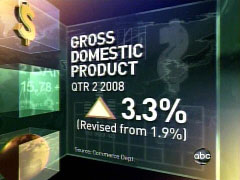 The second quarter Gross Domestic Product (GDP) was revised upward Thursday by the Commerce Department from the initially estimated 1.9 percent to a robust 3.3 percent, but neither the CBS Evening News nor NBC Nightly News mentioned the good news, while on ABC's World News anchor Charles Gibson, at Invesco Field, allocated 13 seconds to what he considered “surprisingly strong” economic news:

Other news, a surprisingly strong reading on the economy. The Gross Domestic Product grew at a rate of 3.3 percent in the second quarter, helped by those government stimulus checks and a jump in exports because the dollar is so weak.

NBC News veteran Tom Brokaw, however, was still presuming economic disaster hours after the new GDP number was released in the morning. Just past 2 PM MDT/4PM EDT on MSNBC, Brokaw asserted from Denver:

Beyond this arena, and this city, the American people are facing some of the greatest problems that they have faced, certainly in our lifetimes. Financial crisis, greatest since the Depression; energy crisis; two wars in two different countries; the Russian bear is crashing around in the woods again.

Thursday night, NBC had time for a full story on the potential demise of the Portland Press-Herald newspaper in Maine and on the CBS Evening News Katie Couric raised with Michelle Obama how racism will hurt her husband:

Do you worry about the people who haven't moved forward, who don't judge people by the content of their character but by the color of their skin?

Two months ago, when the reported second quarter GDP doubled to 1.9 percent, up from 0.9 percent in the first quarter, the CBS Evening News centered a story around “disappointing” news about the supposedly “struggling economy” -- while ABC and NBC, which on April 30 led with full stories on the news of a 0.6 percent first quarter GDP, didn't utter a syllable about the big GDP jump. 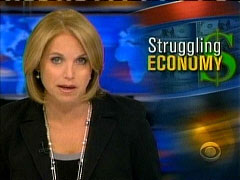 Yet the CBS Evening News centered a story around "disappointing" news about the supposedly "struggling economy" (with that on screen) -- while ABC and NBC, which on April 30 led with full stories on the news of a 0.6 percent (since revised to 0.9) first quarter GDP, didn't utter a syllable Thursday night about the big GDP jump. On the last day of April, ABC's Betsy Stark declared the economy had "flat lined" and NBC anchor Brian Williams warned "it's getting rough out there" as the new GDP number "stops just short of the official declaration of a recession." Thursday night, however, ABC's World News and NBC Nightly News made time for full stories on outrage over ExxonMobil earning "the largest profit ever made by a U.S. company." The "oil industry says it is not out of line, but some motorists feel otherwise."

CBS anchor Katie Couric, picking up on the 4th quarter 2007 GDP revision from 0.6 percent to a minus 0.2, stressed how "the government now says the economy was receding, not growing, in the final quarter of last year" though "it picked up a bit in the first quarter of this year." She then twisted the fresh news of a 1.9 percent jump into a negative: "But look at this: In the second quarter, when all those rebate checks were supposed to stimulate the economy, it grew less than two percent. Jeff Glor has more about the disappointing numbers."

Preferring an anecdote to factual data analysis, Glor started his story with how "you'll have a hard time convincing Paula Corletto the economy is growing" since "she and her eight-year-old daughter Leandra," both of whom CBS showed shopping for clothes, "now limit their shopping to only one day a week."...