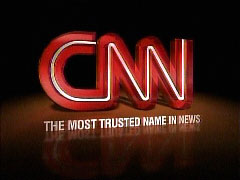 “Over the last 10 years,” the just-released biennial news consumption survey from the Pew Research Center for the People and the Press determined, “virtually every news organization or program has seen its credibility marks decline” and “Democrats continue to give most news organizations much higher credibility ratings than do Republicans.”

Based on past Pew polls, CNN touts itself as “the most trusted name in news,” but the percent who “believe all or most” of what CNN reports has fallen 12 points, to 30 percent, since Pew first posed the question in 1998. Yet, in a sign of how far the news media have fallen in the eyes of the public, that puts CNN at the top of the 12 television news outlets analyzed, as well as above all the newspapers and online sources. Believability for ABC News, CBS News and NBC News is down six points over the past ten years, to 24 percent for ABC and NBC, 22 percent for CBS, but that's still better than the mere 18 percent who “believe all or most” of what they read in the New York Times.

The extensive polling conducted in May also discovered that the audiences for CNN and MSNBC, “which were heavily Democratic two years ago, have become even more so: fully 51 percent of CNN's regular viewers are Democrats while only 18 percent are Republicans. MSNBC's audience makeup is similar -- 45 percent of regular viewers of MSNBC are Democrats, 18 percent are Republicans” and “the regular audience for nightly network news also is now about two-to-one Democratic (45 percent vs. 22 percent Republican).”

Fox News Channel attracts a more balanced audience: “Currently, 39 percent of regular Fox News viewers are Republicans while 33 percent are Democrats; in 2006, the margin was 38 percent to 31 percent."

(“Regular viewers of The Colbert Report with Stephen Colbert and The Daily Show with Jon Stewart,” not surprisingly, “are much more liberal than the public at large. More than a third of Colbert's regular viewers (36%) describe their political views as liberal and 45% of regular Daily Show viewers say they are liberal.”)

The “Watching, Reading and Listening to the News” section with the numbers on who watches what by party and ideology.

Traditional news outlets fared much better, however, that online ones:

Online news outlets are viewed with more skepticism than their print, broadcast and cable counterparts. Of seven organizations evaluated, none is viewed as highly credible by even a quarter of online users able to rate them.

Online magazines Slate and Salon do not fare as well. Among those who could rate them, just 31% give Slate a three or four credibility rating, while 28% offer such similar ratings for Salon. These ratings are based on a relatively small group able to rate these outlets: 70% of internet users could not rate Salon, and 67% could not evaluate Slate.

An excerpt from the “Media Credibility” summary:

The public continues to express skepticism about what they see, hear and read in the media. No major news outlet -- whether broadcast or cable, print or online - stands out as particularly credible. 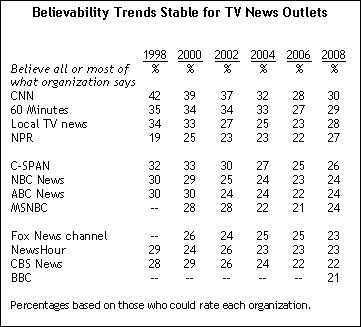 In 1998, for example, 42% of those who could rate CNN gave it the highest rating for credibility (four on a scale from one to four). That fell to 28% in 2006, and remains low in the current survey (30%). Credibility ratings for several other television news organizations - including the three major broadcast news outlets - also have declined since 1998. Comparable percentages say they can believe all or most of what NBC News (24%), ABC News (24%) and CBS News (22%) report (based on those who can rate those organizations).

Credibility ratings for the Fox News Channel have remained largely stable in recent years. Currently, 23% say they can believe all or most of what they hear from Fox, down slightly from 2006 and 2004 (25%).

A quarter of those able to rate The Wall Street Journal give that newspaper the highest credibility marks. That is slightly more than say the same about their own daily paper (22%). The Journal also gets higher marks than The New York Times (18%) or USA Today (16%)....

Ratings for the Times have been fairly consistent since 2004, the first year the newspaper was asked about. Ratings for USA Today are somewhat lower now than they were in 1998 or 2000 (23% then vs. 16% currently). 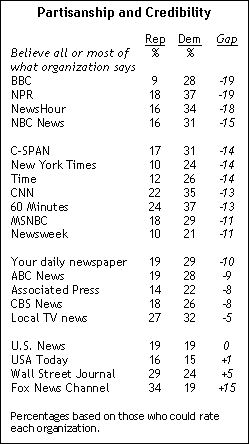 Republicans are substantially more likely to give the highest credibility rating to the Fox News Channel (34%) than are Democrats (19%). Fox ranks very low in credibility among Democrats; still, Fox's ratings among Democrats are much higher than Republican ratings for The New York Times (10% give it a four) or BBC (9%).

Partisan differences in credibility ratings for news organizations have fluctuated in recent years. In 2004, for example, there was a 19-point gap between Democrats and Republicans when it came to CBS News. That dropped to 11 points in 2006 and 8 points this year. The gap for ABC News fell from 18 points in 2004 to 9 points in 2006 and remains at 9 points this year. Most of the narrowing of the difference has been driven by Democrats lowering their estimation of each network's credibility.

By contrast, evaluations of The New York Times have become more divided. In 2006, 16% of Republicans gave the newspaper a top-credibility rating; that fell to 10% in the current survey. Democratic ratings for the Times have remained stable (23% top rating in 2006, 24% in 2008)....

The "How the Public Views the Media" section of the MRC's "Media Bias Basics" lists many more surveys of how the public perceive journalists and the news media.
Media Bias Debate Journalistic Issues