Ongoing Blackout of Wright's 9/11 Rant, Only ABC Covers Him Monday 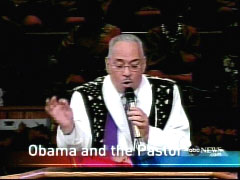 The broadcast network evening show blackout, of Reverend Jeremiah Wright's 2001 charge that the U.S. earned the 9/11 attacks, continued Monday night as neither CBS nor NBC touched the Wright issue and ABC ran a full story which included Wright's “U.S. of K-K-K-A” hate speech and how Obama has been close to Wright for 20 years, but concluded with how “many African-Americans do not understand” the controversy since the “kind of fiery language Wright uses is not uncommon in black churches.”

The race-based, white-bashing rants may not be so uncommon, but is anti-American shouting -- about how “we nuked far more than the thousands in New York and the Pentagon, and we never batted an eye” and so “America's chickens are coming home to roost” -- so common?

Anchor Charles Gibson set up the story from Jake Tapper by asserting Obama “is being dogged by his pastor's provocative comments.” After the “U.S. of K-K-K-A” soundbite, Tapper pointed out how “Wright has played an important role in Obama's life for 20 years.” Viewers then saw a clip of Obama from June of 2007 giving “a special shout out to my pastor” who's “a friend. And a great leader.” Following some quotes illustrating Obama's awareness a year ago of how Wright's views could prove embarrassing, Tapper ended with how such language is not unusual in black churches.

Not a word on Monday's CBS Evening News (anchored by Russ Mitchell) of Wright/Obama and, on Monday's NBC Nightly News, merely one cryptic “by the way” line from anchor Brian Williams:

Barack Obama, campaigning in Pennsylvania, said the country was probably already in a recession. He called again today for middle class tax cuts. By the way, Obama plans a major speech tomorrow morning in Philadelphia on the topics of race and religion.

In a sermon the Sunday after the 9/11 terrorist attacks, Wright suggested America spurred and deserved the attacks:

We bombed Hiroshima! We bombed Nagasaki! And we nuked far more than the thousands in New York and the Pentagon, and we never batted an eye....We have supported state terrorism against the Palestinians and black South Africans, and now we are indignant because the stuff we have done overseas is now brought right back into our own front yard. America's chickens are coming home to roost.

No part of that far-left, Blame America First language has made it onto the ABC, CBS or NBC evening newscasts since the video became public last Thursday. My March 15 NewsBusters/March 17 MRC CyberAlert item, “Instead of Wright, NBC Touts Childhood Pals: 'Good Luck Barry!',” recounted:

Friday night, ABC didn't have anything on Wright, though after Thursday's Good Morning America aired a story by Brian Ross about Wright's rants, Thursday's World News was the only broadcast network evening newscast to touch Wright as Jake Tapper ran this one soundbite from Wright attacking Hillary Clinton: "Barack knows what it means to be a black man, living in a country and a culture that is controlled by rich, white people. Hillary can never know that. Hillary ain't never been called a n----er."

Friday's CBS Evening News carried a story by Dean Reynolds which ran the "Not God Bless America, God [bleep] America" before Reynolds explained the close connection between Wright and Obama: "Reverend Wright officiated at Obama's wedding and the baptism of his children and he is described as a mentor for whom Obama took the phrase 'the audacity of hope' for the title of his book."

The story on the Monday, March 17 World News on ABC:

CHARLES GIBSON: Next we're going to turn to the fine line that Barack Obama is walking as he embraces his religion while trying to distance himself from the fiery pastor of his Chicago church. Tomorrow Obama is set to deliver what his campaign calls a major speech on race. As senior political correspondent Jake Tapper reports, it comes as Obama is being dogged by his pastor's provocative comments. 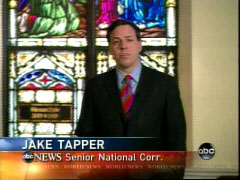 JAKE TAPPER: Questions about Barack Obama's pastor, Reverend Jeremiah Wright, continued to dog the candidate on the campaign trail today. They came after a weekend of damage control: Putting out an explanatory video, removing Wright from his campaign team.

REVEREND JEREMIAH WRIGHT: They will not only attack you if you try to point out what's going in white America, U.S. of K-K-K-A.

TAPPER: Wright has played an important role in Obama's life for 20 years.

BARACK OBAMA, JUNE 2007: I've got to give a special shout out to my pastor. The guy who puts up with me, counsels me, listens to my wife complain about me. He's a friend. And a great leader.

OBAMA IN WEB VIDEO: When these statements -- or at least some of them -- first came to my attention, it was at the beginning of my presidential campaign. 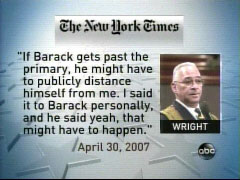 TAPPER: Wright was originally supposed to speak at Obama's candidacy announcement, but Obama disinvited him, telling him Wright recalled for the New York Times quote, “You can get kind of rough in the sermons. It's best for you not to be out there in public.” Last April, Wright said, quote: “If Barack gets past the primary, he might have to publicly distance himself from me. I said it to Barack personally, and he said yeah, that might have to happen.” But many African-Americans do not understand, pointing out the kind of fiery language Wright uses is not uncommon in black churches throughout the country. That will be a topic Obama addresses in his speech on race Tuesday.

OBAMA: Part of what I'll do tomorrow is to talk a little bit about how some of these issues are perceived from within the black church community for example, which I think views this very differently.

TAPPER: Another reminder of the chasm between black and white America.