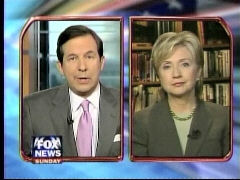 Democratic presidential aspirant Hillary Clinton appeared on all five Sunday morning interview shows, but not all raised two controversies of interest to conservatives and, even when they did, not all took a tough approach to her lack of condemnation of MoveOn.org's “General Betray Us” ad and the donations gathered for her by now-captured fugitive Norman Hsu. ABC's George Stephanopoulos and NBC's Tim Russert brought up both matters -- though Stephanopoulos did so in the gentlest way -- CBS's Bob Schieffer asked about Hsu and not “Betray Us,” while Fox's Chris Wallace and CNN's Wolf Blitzer skipped Hsu but raised “Betray Us.”

No one pressed Clinton on how at the hearing with General Petraeus she said his report required “the willing suspension of disbelief.” Only Wallace, on Fox News Sunday, pointed out how Clinton had voted against a Senate resolution condemning the MoveOn ad: “Senator, you have refused to criticize the MoveOn.org ad about General Petraeus. And in fact, this week you voted against a Senate resolution denouncing it.” In contrast, on ABC's This Week, Stephanopoulos presumed Clinton was disturbed by the ad as he asked: “Why not speak out earlier?” On the Hsu case, Stephanopoulos approached the issue from the concerns of other Democrats: “A lot of people look at this and say they're afraid they're going to go back to the days of 1996 when there were some campaign finance violations that many Democrats feel cost President Clinton a couple of points in the final days of the election. How do you assure them that's not going to happen again?” Only NBC's Russert, on Meet the Press, used Hsu to remind viewers of Johnny Chung's illegal 1996 donations to the Bill Clinton campaign.

Whenever asked about the MoveOn.org ad, Clinton responded with how she voted for Senator Barbara Boxer's alternate resolution that went back in time to condemn Republican political campaign ads against Democratic candidates, a far different matter than impugning a sitting General running a war. An exchange on CNN's Late Edition:

WOLF BLITZER: The President also this week blasted Democrats for in effect supporting or at least remaining silent in the face of that MoveOn.org New York Times ad questioning General David Petraeus as "General David Betray Us." Listen to what the President said.

BLITZER: Is the President right?

CLINTON: Well, I thought it was pretty sorry when his campaign attacked Senator Kerry's record of service, and I thought it was pretty sorry when the Republicans attacked Senator Cleland. I don't condone attacks by anyone on the patriotism and service of our military. I am an admirer of General Petraeus, as I've said on numerous occasions. I don't condone it, and I joined in voting for a resolution that condemned such attacks. But let's be clear here. This debate should not be about an ad. This debate should be about the president's failed policies. The Republicans are very good at coming up with political strategies, but unfortunately, they don't seem to have a very adequate grasp of military or geopolitical strategies that will forward America's standing, position, values and interests in the world. So I think that we ought to stay focused on what's important -- the war in Iraq -- and not allow this debate to go off track. And I look forward to continuing to debate what we should be doing in Iraq, and I would invite the Republicans to join in that debate.

BLITZER: But quickly, do you want to disassociate yourself from that MoveOn.org ad?

CLINTON: I have voted against it. I mean, I've voted for Senator Boxer's resolution, which condemned that attack, and also condemned the attacks on Senator Cleland and Senator Kerry. I don't condone it. I voted to condemn it. But again, I would underscore, let's be clear what's going on here. This is an effort to focus on an ad that I condemned and don't condone in order to avoid having to deal with the tough questions about our policy in Iraq. The policy has failed. The president is able to hang on to it because he has enough Republican support. It's going to be an issue in the '08 election, and I hope that we will be electing more Democrats, because that is the way to really change direction in our country.

The relevant questions from Stephanopoulos on ABC's This Week, where Clinton appeared for about 23 minutes: 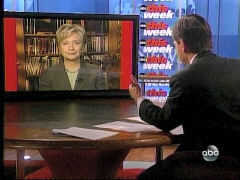 Mayor Giuliani also hit you pretty hard for failing early on to condemn that MoveOn.org ad which called General Petraeus 'General Betray Us.' Why not speak out earlier?

Let me ask you a question about campaign finance and Norman Hsu, we're going to show him now, of course he's the gentleman who's now been arrested. You had to return about $850,000 that he raised for your campaign and I know that you returned the money, but a lot of people look at this and say they're afraid they're going to go back to the days of 1996 when there were some campaign finance violations that many Democrats feel cost President Clinton a couple of points in the final days of the election. How do you assure them that's not going to happen again?

Tim Russert on Meet the Press, which had Clinton for about 24 minutes: 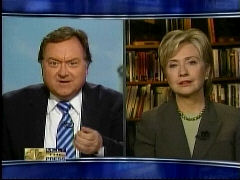 Let me show you an ad that has caused a lot of controversy in this debate about Iraq. MoveOn.org took this ad out, "General Petraeus or General Betray Us?: Cooking the Books for the White House." Do you believe that General David Petraeus has betrayed the American people?

Let me turn to campaign fundraising, because it's been -- politics and money has been an issue that is of grave concern to the American people. As you well know, this gentleman, Norman Hsu, was a big fundraiser for you. This is how the Wall Street Journal reported on it. "Senator Hillary Clinton will return $850,000 in campaign contributions raised by a major fund-raiser who has come under federal investigation on multiple fronts. Clinton said she would refund contributions to about 260 donors who were recruited by Norman Hsu, a businessman and Democratic fund-raiser. The $850,000 is the largest ever returned by a candidate because of questionable fund-raising methods." Also, Mr. Hsu gave free trips to Las Vegas for several of your campaign aides, all expenses paid. You talk about the politics of change. Is this changing the way Washington does business?

But, Senator, as you well know, back in 1996 campaign, this man, Johnny Chung, a -- very similar circumstances and he plead guilty to illegally funding of money, and he was quoted as saying, "I see the White House is like a subway. You have to put in coins to open the gates." How do you convince the American people that you have changed, that you are not going to be the recipient of this tainted money?

Chris Wallace, on Fox News Sunday, where Clinton got about 17 minutes:

Senator, you have refused to criticize the MoveOn.org ad about General Petraeus. And in fact, this week you voted against a Senate resolution denouncing it. President Bush said that you and other Democrats are more “afraid” -- his word -- “afraid” of irritating the left wing and MoveOn than you are about insulting the American military. Does he have a point?

But, Senator, I want to follow up on this question of the real debate, and I want to put up an article by liberal columnist Richard Cohen this week. He wrote, “When the entertainment mogul David Geffen, once a Clinton supporter, called both Bill and Hillary liars, Hillary not only decried the remark as a particularly vivid example of the politics of personal destruction, but she demanded that Barack Obama do the same and return a $2,300 donation Geffen had given him. Yet when Clinton herself was asked to repudiate the abuse of Petraeus, she either saw no reason to do so or, much more likely, was afraid to alienate an important constituency, the 3.3 million members of MoveOn.org.” So let me ask you specifically. Do you repudiate the MoveOn.org ad?

HILLARY CLINTON: I have said, and I have voted for, condemning anyone who goes after the patriotism and service of any American.

Bob Schieffer on Face the Nation, where Clinton's appearance last about 16 minutes:

Earlier this month your campaign had to give back $850,000 in contributions that had been given, or gathered up for your campaign by a fundraiser who turns out to be an indicted swindler. Senator, what happens when these people come to you with these enormous sums of money? Do you just take it with no questions asked and is this going to change the way you do fundraising in the future?