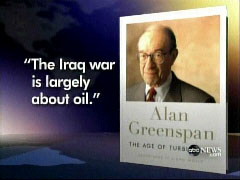 “Harsh accusation,” ABC anchor Dan Harris teased at the top of Sunday's World News as he highlighted how “one of the most respected figures in Washington says the Bush administration went to war in Iraq because of oil.” Harris soon referred to it as “an eyebrow raising allegation on Iraq” in a new book from Alan Greenspan, the former Chairman of the Federal Reserve. But after a Monday Washington Post story, in which Greenspan declared that oil was “not the administration's motive,” and appearance by on the Today show made it abundantly clear the inaccuracy of the implication that Greenspan was somehow endorsing a left-wing conspiracy theory about how George W. Bush went to war to financially benefit Dick Cheney's oil industry friends, ABC's World News on Monday failed to offer any correction for its incendiary, and erroneous, reporting. In fact, the September 17 World News didn't mention Greenspan at all.

He made the striking comment in a new memoir out today that “the Iraq War is largely about oil.” In the interview, he clarified that sentence in his 531-page book, saying that while securing global oil supplies was 'not the administration's motive,' he had presented the White House with the case for why removing Hussein was important for the global economy. "I was not saying that that's the administration's motive," Greenspan said in an interview Saturday, "I'm just saying that if somebody asked me, 'Are we fortunate in taking out Saddam?' I would say it was essential."

On Monday's Today show to plug his new book, The Age of Turbulence: Adventures in a New World, Greenspan directly contradicted what ABC presumed Sunday night. Matt Lauer pointed out: “Liberal bloggers are having a field day with this. They're saying here's a Republican saying the administration lied about the reason to go to war. Is that a spin? Is that fair?” Greenspan retorted: “It's utterly unfair.”

The MRC's Geoffrey Dickens took down this exchange between Lauer and Greenspan on the September 17 Today on NBC:

MATT LAUER: You write a 500 page book and you know what happens, people want to talk about a certain couple of key sentences in that book. So let's get to a couple of them right now. In a chapter about the long-term energy squeeze you write, quote, 'I am saddened that it is politically inconvenient to acknowledge what everyone knows: the Iraq war is largely about oil.' Now as a lifelong libertarian Republican, as the former Chairman of the Federal Reserve, you know that when you speak, people are gonna listen, they're gonna react. Liberal bloggers are having a field day with this. They're saying here's a Republican saying the administration lied about the reason to go to war. Is that a spin? Is that fair? 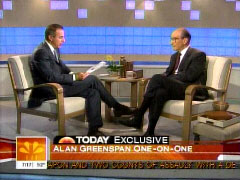 GREENSPAN: It's utterly unfair. I was expressing my view. Saddam Hussein was obviously seeking to get a chokehold on the Straits of Hormuz, where about 18 million barrels a day, flow from the Middle East to the industrial world. Had he been able to get a hold of a nuclear weapon and indeed move through Kuwait and into Saudi Arabia and control the Straits of Hormuz it would have caused chaos in the international-

LAUER: So are we talking about semantics here, Alan? In other words the, the administration went to the war saying it was all about weapons of mass destruction-

The White House is pushing back tonight against an eyebrow raising allegation on Iraq. One of the best known and most highly regarded people in Washington, the former Federal Reserve Board Chairman Alan Greenspan, says the Bush administration went to war in Iraq largely because of oil. That is just one of the criticisms Greenspan is leveling in a new book that's coming out tomorrow. Here's ABC's John Cochran.

Cochran ran through several of the points made by Greenspan, particularly his disappointment with soaring spending during the Bush years, before getting to the oil charge:

COCHRAN: Greenspan especially upset the White House by writing in his book that "The Iraq war is largely about oil." Today on ABC's This Week, Defense Secretary Gates said Greenspan is wrong.

ROBERT GATES: I know the same allegation was made about the gulf war in 1991, and i just don't believe it's true. 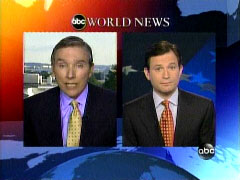 COCHRAN: Dan, when I asked a White House spokesman about Greenspan's charge he dismissed it with what seemed like bitterness, saying quote: "I will restrain myself. The reasons we went to Iraq are well understood and had to do with weapons of mass destruction." As for Greenspan's opinion the spokesman said "that sounds like Georgetown cocktail party analysis."

HARRIS: Sensitive topic, no question about it. John thank you.

But not sensitive enough for ABC to correct the next night.
John Cochran Alan Greenspan