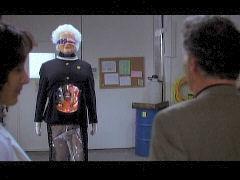 My NewsBusters item last week previewed how Sunday's then-upcoming episode of the L word, Showtime's drama series about lesbians in Los Angeles, would feature the “Unauthorized Abortion of W,” a sculpture of a woman's body with an exposed womb displaying George W. Bush's adult face with each of his hands holding onto a rocket labeled “U.S. Air Force.” The rockets were angled to suggest they represent forceps. The preview on which I based my posting (video in the earlier NB item) only displayed the exposed womb in a woman's body. The full scene aired Sunday night showed that the figure was made to look just like Barbara Bush, with an American flag blindfold, and with the suction end of a vacuum cleaner just below her crotch.

In the January 28 episode (which will re-run several times this week), university chancellor “Phyllis,” played by Cybill Shepherd, warns “Bette Porter,” the dean of the university's art school played by Jennifer Beals, that big potential donor “Skip Collins,” who is coming for a visit, is quite conservative: “Conservative is a little left of where he is. He and George W. grew up playing G.I. Joes together.” So, Bette Porter asks “Jodi Lerner," an “artist-in-residence” played by Marlee Matlin, to hide anything in her sculpture studio which would upset Collins. Instead, she puts the Bush abortion sculpture in the center of the art studio. When Porter pulls her aside to complain, Lerner lectures: “My understanding was that you wanted me to capitulate to some asshole's reptilian politics to get money out of him and that I will never do.” 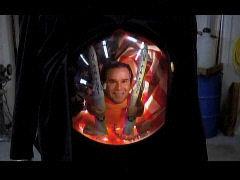 Lerner then announces to Collins: “This is called the 'Unauthorized Abortion of W.' Some of the most powerful student work I've seen.” Collins, seeing the sculpture with a vacuum cleaner at its base, fires back: “It's an abomination and an abuse of university funds.” Porter pleads with him: “Look Skip, don't you think, really, that the primary purpose of a university is to provide a safe haven to explore ideas and expand boundaries?” Collins: “Not on my dollar.”

After Collins storms out, Lerner urges Porter to “give him the speech about how the impressionists were met with the same response when they debuted their work in Paris in 1874.”
Abortion Entertainment Media Video