ABC: Snow a "Conservative Commentator Who Called" Bush "'an Embarrassment'" 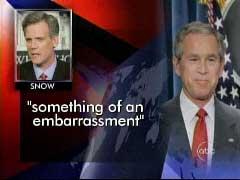 ABC and NBC on Wednesday night delighted in showcasing how incoming White House Press Secretary Tony Snow last year wrote that President Bush had become “an embarrassment.” But in portraying the quote as a declarative accusation, neither ABC's Elizabeth Vargas or NBC's David Gregory put the remark into the context of how Snow was observing that Virginia Republicans not wishing to appear with Bush during the 2005 campaign suggested “Bush has become something of an embarrassment.” And neither bothered to let their viewers in on how they were just funneling quotes from a short list collected by the left-wing Center for American Progress. Vargas teased at the top of World News Tonight, “President Bush chooses a new spokesman: A conservative commentator who once called the President 'an embarrassment.'" Vargas managed to apply an ideological tag to Snow three times in under two minutes. She also ludicrously asserted that “Tony Snow is the first journalist to get this job.” Tell that to Pierre Salinger, Bill Moyers, Ron Nessen or Joe Lockhart -- who was a producer for Vargas' own ABC News.

NBC's David Gregory at least hinted at some context, though he still implied it was an accusation, as he related how Snow “has criticized his new boss, writing last year that, quote, 'George Bush has become something of an embarrassment.'” Gregory twice labeled Snow “conservative” before pointing out what eluded Vargas: “He is the first TV personality to be in the job since Gerald Ford hired away Ron Nessen from NBC News back in the 70s." (Transcripts follow.)

The headline over the page on the Website of the Center for American Progress: “Tony Snow On President Bush: ‘An Embarrassment,' ‘Impotent,' ‘Doesn't Seem To Mean What He Says.'” The fourth quote:

James Taranto pointed out in his Wednesday “Best of the Web” e-mail/posting for OpinionJournal.com (I've put in UPPER CASE the clause picked out by the left-wing group and so readily passed along by ABC and NBC):

The quote comes from a column on the Virginia governor's election, in which Democrat Tim Kaine beat Republican Jerry Kilgore. Here it is in context:

And don't forget about the Swagger Factor: A party that projects confidence and good cheer will thrash a Chicken Little party any day. Kilgore looked scared. Kaine acted like the cool kid on prom night.

The Swagger Factor has national repercussions because George W. Bush has lost his. His wavering conservatism has become an active concern among Republicans, who wish he would stop cowering under the bed and start fighting back against the likes of Harry Reid, Nancy Pelosi and Joe Wilson. The newly Passive GEORGE BUSH HAS BECOME SOMETHING OF AN EMBARRASSMENT. At the nadir of his campaign, Jerry Kilgore actively dodged having to share a stage with the commander in chief.

As for Lockhart's pre-Clinton history, the October 5, 1998 MRC MediaWatch reported:

As the Washington Post's Howard Kurtz noted in a September 9 profile, "he will be the first White House press secretary since Ron Nessen in the Ford administration to have had a recent career as a newsman. The son of journalists and the husband of a longtime ABC producer, Lockhart was spinning through the revolving door between media and politics long before that phrase became fashionable." Indeed, he has bounc-ed back and forth since his father, an executive with NBC News, landed him a volunteer spot in Carter's 1980 reelection campaign.

As recounted by Kurtz, Lockhart "left to become an NBC foot soldier, writing for the network's internal wire at the Democratic National Convention." After the convention he got a paying job with the campaign.

By 1984 he had "climbed aboard Walter Mondale's presidential campaign. He was responsible for the care and feeding of the network cameramen and technicians, riding with them on the 'zoo plane' and helping them find backdrops for better shots."

Mondale's loss led Lockhart to a Press Secretary position for Democratic Senator Paul Simon. But he soon crossed back as an assignment editor for ABC News in Chicago, later taking the same title in CNN's Washington bureau. Within a couple of years, he signed aboard the 1988 Dukakis presidential effort as a traveling press aide.

When his wife Laura Logan, Deputy Press Secretary for John Glenn's 1984 presidential run, was transferred to London by her employer, ABC News, Lockhart followed and landed a slot with the nemesis of liberals: Rupert Murdoch. Kurtz recounted: "He applied for a producer's job at British-based Sky News and was stunned when executives there wanted him for on-air work....Soon his daily business reports were running back home on Fox, albeit at 5 a.m. Sky News dispatched him to Washington to report on the Gulf War, but...his program was later canceled." Back in the U.S. he worked for the Clinton campaign, then assumed the Deputy Press Secretary slot at the White House.

ABC's World News Tonight. The up top tease from Vargas:

“Press Secretary. President Bush chooses a new spokesman. A conservative commentator who once called the President 'an embarrassment.'” 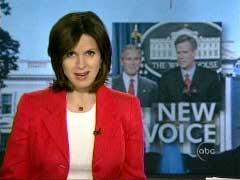 “President Bush hopes to get help conveying his message on Iraq from his new Press Secretary. Fox News commentator Tony Snow will be moving to the other side of the podium. He was a speech writer for the first President Bush, so he's no stranger to the White House. But he does stand out for some of the things he said about this President in the past. Snow has been a reliable conservative voice on television, radio and in print. Like many fiscally conservative commentators, he has also taken President Bush to task. He's called him, 'something of an embarrassment' for not fighting harder against congressional Democrats, a leader who has 'lost control of the federal budget' and the architect of a 'listless domestic policy.'”

President Bush at announcement of Snow's appointment: “I asked him about those comments. And he said, 'you should have heard what I said about the other guy.'"

Tony Snow to White House press corp: “I look forward to working with you. Thanks.”

NBC's David Gregory as Snow and Bush walk out of the press room: “Mr. President, what does this choice say about what you think you need in the second term?”

Vargas: “But today, at least, the President and his new Press Secretary left the press room without taking any questions. And ABC's Chief Washington correspondent, George Stephanopoulos, joins us. George, Tony Snow is the first journalist to get this job. He's outspoken, he's opinionated. How do you think he'll do?”

Stephanopoulos, in DC: “I think he's going to do very well. He's made his living communicating. He's a smart and very likable guy, so he should lower the temperature in the briefing room and also increase the star power. And also by picking him, President Bush has already helped himself by going outside of his circle, picking someone of independent stature he shows that he's not afraid of having big people with independent opinions in the White House.”

Vargas: “And what's the toughest part of the job, do you think, for Tony Snow going in?”

Stephanopoulos: “Psychological adjustment. As you showed, he's been out there for a long time voicing his own opinions. Now, he's going to have to learn to squelch those private opinions and deliver the party line with conviction and that's going to take some getting used to.”

NBC Nightly News, with the closed-captioning corrected against the video by the MRC's Brad Wilmouth. David Gregory after beginning his story by looking at Karl Rove's appearance before a grand jury: 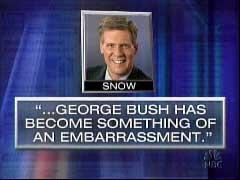 "Renewed focus on the case today overshadowed the President's announcement. Snow, a conservative commentator who worked in Bush 41's White House, has criticized his new boss, writing last year that, quote, 'George Bush has become something of an embarrassment.' That, quote, 'no president has looked this impotent this long.' Writing this year that the White House had a, quote, 'listless domestic policy.' The President appeared to welcome those knocks today as proof he wants advisors to give him unvarnished advice."

George W. Bush: "He's not afraid to express his own opinions. I asked him about those comments, and he said you should have heard what I said about the other guy."

Gregory: "Snow is a reliable conservative, and how he's expected to aggressively defend the President. Brian, also worth noting that he is the first TV personality to be in the job since Gerald Ford hired away Ron Nessen from NBC News back in the 70s."