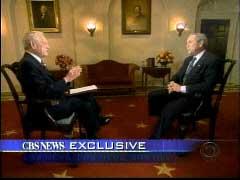 Bob Schieffer mostly posed unobjectionable questions on the news of the day (Hamas, Iran, etc.) to President George W. Bush in an interview conducted Friday and then excerpted on the CBS Evening News. But he did pose three inquiries from the agenda of the left which caught my attention. Schieffer wanted to know, in reference to NSA eavesdropping, if Bush thinks “there is anything that a President cannot do, if he considers it necessary, in an emergency like this?" Raising “horror stories about torture,” Schieffer cited Hubert Humphrey in pressing Bush on whether he worries the U.S. is “losing the moral high ground in some way?" Moving on to dependence on foreign oil, Schieffer touted New York Times columnist Tom Friedman’s advocacy of, in Schieffer's words, a “huge gas tax” because it’s “the only way to cause people to change their ways.” (Full quotations follow of these questions from Schieffer.)

Except for a brief note about the “sharp slowdown at the end of last year" in the economy with a 1.1 percent fourth quarter annualized GDP and a full story on the 20th anniversary of Christa McAuliffe’s death in the Challenger disaster, CBS devoted the entire newscast to excerpts from the interview conducted both sitting down inside the White House and as the two walked around outside the West Wing. Sunday’s Face the Nation will also be dedicated to excerpts from the interview.

CBSNews.com has posted a transcript of the entire interview, though it differs from mine in some areas due to its inaccuracy in a few places (I corrected it against what aired) and CBS’s editing in which portions of Schieffer’s questions -- in some places just a couple of words -- were cut out. The CBS Evening News Web page features video of the interview.

Full quotations, as aired on the January 27 CBS Evening News, of the three questions which piqued my interest due to the agenda they reflected:

# “Do you believe that there is anything that a President cannot do, if he considers it necessary, in an emergency like this?” (Bush: “can’t order torture.”)

# “I want to ask you just a sort of a philosophical question, and that is, Hubert Humphrey once said that the 1964 Civil Rights Act was America's most successful foreign policy initiative because it told people who we were and what we stand for. And I just wonder, when we see some of these horror stories about torture, about things that have happened in some of these prisons, do you worry that maybe we’re losing the moral high ground in some way?” (Bush: Abu Ghraib pictures “disgraced” the U.S., but America is a “compassionate” nation that does a lot of great things for the world.)

# “Tom Friedman, the columnist for the New York Times, had a column today, and he said, putting on a huge gas tax is the only way to really get Detroit's attention, and he said the only way to cause people to change their ways. What's your reaction to that?” (Bush: opposed to hike of gas tax, must employ research to develop domestic energy resources.)

The New York Times hides its columnist behind its “Times Select” wall, but here is the portion of Friedman’s Friday column Schieffer trumpeted. Friedman’s column was the imaginary text of the State of the Union address Friedman dreams Bush would deliver on Tuesday. An excerpt from his January 27 column in which he advocated crushing big cars:

I am sending Congress the Bush Energy Freedom Act. It is based on ideas first offered by the energy expert Philip Verleger and it argues the following:

Transportation accounts for most of our oil consumption. And many Americans have purchased big cars and S.U.V.'s, expecting gasoline to remain cheap. That is no longer the case. Therefore, I propose creating a government agency that will buy up any gas-guzzling car or truck in America at the original new or used price, and crush it. This national buy-back program will be financed by a $2-a-gallon gasoline tax that will be phased in by 10 cents a month beginning in 2008 -- so people know what is coming and start buying fuel-efficient cars right now....

One last thing: I have accepted the resignation of Vice President Dick Cheney, who felt he could not be a salesman for the Energy Freedom Act. I am nominating Jeffrey Immelt -- the C.E.O. of General Electric, who has focused G.E.'s innovation around ''eco-imagination'' -- as Mr. Cheney's replacement.