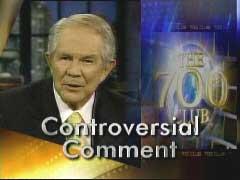 Despite Pat Robertson's waning role in national politics, the broadcast and cable networks on Tuesday evening jumped on his Monday suggestion that Venezuela's leftist President Hugo Chavez should be assassinated now in order to avoid a costly war later. All three broadcast network evening newscasts featured full stories, with ABC's World News Tonight making it the lead. Anchor Charles Gibson snidely forwarded: “A popular Christian broadcaster says assassination is the way to deal with one world leader who criticizes the U.S. Some ask, 'is this Pat Robertson's definition of Christian love?'" CBS played a clip of Donald Rumsfeld dismissing Robertson as just another example of how “private citizens say all kinds of things all the time," and Gloria Borger then countered by touting Robertson's prominence: "But Robertson is not just any private citizen. He's a former Republican presidential candidate with a large evangelical following.” NBC Nightly News anchor Brian Williams declared that Robertson “has created something of an international firestorm” before reporter Bob Faw concluded that Robertson is “a man of God who doesn't calm waters, but roils them.”

Robertson “may have no clout with the Bush administration, but you wouldn't know that from watching CNN today,” FNC's Brit Hume noted in reviewing the competing cable network's all-day obsession -- a focus which continued into the evening with Robertson leading the 7pm EDT Anderson Cooper 360 (hosted by Heidi Collins), the 8pm EDT Paula Zahn Now and the 10pm EDT NewsNight with Aaron Brown who tried to hold the whole religious right culpable as he asserted that "political leaders worried it makes the so-called Christian Right seem neither Christian nor right.” Robertson was also the first topic covered by MSNBC's 7pm Hardball with Chris Matthews and 8pm Countdown with Keith Olbermann.

Unlike the broadcast network coverage, at least the cable shows reviewed some of Chavez's radical policies and alliances.

Hume relayed in his “Grapevine” segment on his 6pm EDT FNC program: “Televangelist Pat Robertson's political influence may have been declining since he came in second in the Iowa Republican caucuses 17 years ago and he may have no clout with the Bush administration, but you wouldn't know that from watching CNN today. CNN covered his call for Hugo Chavez's assassination at length, undeterred by the fact that during the noon hour CNN's own analyst, Bill Schneider, said Robertson had little influence. At the top of the next hour, there it was again followed by a glowing report on the alliance between Chavez and Cuban President Fidel Castro. And it led CNN's three-hour Situation Room, followed minutes later by live coverage of reaction from the Venezuelan ambassador, and then nearly two hours after that an in-studio interview with the ambassador.”

A rundown of the ABC, CBS and NBC stories from Tuesday night, August 23:

Charles Gibson's tease: “On World News Tonight: A popular Christian broadcaster says assassination is the way to deal with one world leader who criticizes the U.S. Some ask, 'is this Pat Robertson's definition of Christian love?"

“Good evening. It is not something you expect to hear from a Christian minister: A call for the assassination of a world leader. The Reverend Pat Robertson, a television fixture with his 700 Club and a former presidential candidate, suggested that U.S. operatives should take out the President of Venezuela, Hugo Chavez, to stop that country from becoming, in Robertson's words 'a launching pad for communism and Muslim extremism.' ABC's Dan Harris is here.”

Harris: “Good evening. Pat Robertson says Hugo Chavez is quote, 'a terrific danger to the United States.' But his spokesperson could not say whether Robertson's assassination suggestion is in keeping with his Christian faith. “

Robertson on Monday's 700 Club on the ABC Family channel: “We have the ability to take him out. And I think the time has come that we exercise that ability.”

Harris: “Pat Robertson is standing by his call for the assassination of Venezuelan President Chavez, an outspoken critic of the U.S., who today wrapped up a visit with Cuba's Fidel Castro.”

Robertson on 700 Club: “We don't need another $200 billion war to get rid of one, you know, strong-armed dictator. It's a whole lot easier to have some of the covert operatives do the job and then get it over with.”

Harris: “Today, those comments were condemned by both the U.S. State Department:”

State Dept. spokesman: “We do not share his views.”

Harris: “And the Venezuelan ambassador, who described the remarks as a 'call to terrorism.' Nearly every prominent Christian conservative leader we called today [pictures of several scroll by on screen], however, even those who are normally eager for media attention, refused to comment. Except pastor Ted Haggard, President of the National Association of Evangelicals.”

Dr. Os Guinness, Trinity Forum: “Jesus called for nothing like this. And Pat Robertson sounded more like one of the radical imams.”

Harris: “Some evangelicals believe Robertson's influence has waned in recent years because of incendiary comments such as suggesting the State Department be nuked and linking feminism to witchcraft. As one said today, 'if this is the sort of person who speaks for evangelicals, then God help us.' Three hundred thousand people a day watch Robertson's show, The 700 Club. But apparently, President Hugo Chavez is not one of them. When asked about the Robertson controversy, as he prepared to leave Cuba late today, Chavez said quote, 'I don't even know who that person is.'”

Anchor John Roberts: “Well, the President wants no part of a policy proposed by religious broadcaster Pat Robertson. The White House, the Pentagon, and the State Department today all rejected Robertson's call for the assassination of Venezuela's outspoken President, Hugo Chavez. Gloria Borger in Washington has more on what Robertson said, and the swift reaction to it.”

Borger: “Pat Robertson's suggestion is unmistakable. Since the Venezuelan President claims that America is trying to kill him:”

Robertson on Monday's 700 Club, via Web video: “If he thinks we're trying to assassinate him, I think we really ought to go ahead and do it. It's a whole lot cheaper than starting a war. [edit jump] We have the ability to take him out, and I think the time has come that we exercise that ability. We don't need another $200 billion war to get rid of one strong-armed dictator. It's a whole lot easier to have some of the covert operatives do the job and then get it over with.”

Borger: “Robertson's rationale: That Chavez is a communist-leaning Castro ally who is destroying the oil-rich Venezuelan economy. The administration is no friend of Chavez either, but Venezuela is America's second-largest oil supplier. Pat Robertson's foreign policy advice went way beyond the diplomatic playbook.”

Donald Rumsfeld: “Certainly it's against the law. Our department doesn't do that type of thing. He's a private citizen. Private citizens say all kinds of things all the time.”

Borger: “But Robertson is not just any private citizen. He's a former Republican presidential candidate with a large evangelical following. Venezuela's Vice President condemned Robertson's remarks as terrorist statements, and challenged the U.S. government to treat him accordingly. The response? A diplomatic denial of any intent to assassinate Chavez.”

Sean McCormack, State Department spokesman: “Any allegations that we are planning to take hostile action against the Venezuelan government are completely baseless and without fact.”

Borger: “And late this afternoon, Chavez, who was in Cuba with fidel Castro said, 'I don't even know who this person is.' Of course, this is probably only going to add to his popularity back home in Venezuela, where Americans are not very popular these days. John.”

Roberts: “Certainly statements like this will add to Robertson's popularity among his most devout followers. And it's not the first rather strange thing that he's said, either.”

Borger: “No, Robertson has a history of saying very strange things. Just recently he said national television that so-called activist judges were worse than the 9/11 terrorists. This is something he does to create controversy. Lots of people say he does it to raise money for his organization. John.”

Anchor Brian Williams: “Pat Robertson is in the news tonight. More than that, he has created something of an international firestorm. It's not the first time the prominent Christian broadcaster has turned heads with something he said, but this time it's different because he called for the U.S. government to assassinate a political leader, a leftist and Castro ally who has himself often accused the U.S. of trying to kill him. NBC's Bob Faw picks up the story tonight.”

Faw: “It was not an extremist cleric issuing a death threat. This was Christian minister Pat Robertson discussing Venezuela's President Hugo Chavez.”

Robertson on Monday's 700 Club: “If he thinks we are trying to assassinate him, I think we at to do it. It is cheaper than starting a war. We have the ability to take him out, and I think the time has come that we exercise that ability. We don't need another $200 billion war to get rid of one strong-armed dictator. It's a whole lot easier to have some of the covert operatives do the job and then get it over with.”

Faw: “Immediately Chavez's government called the remarks terrorist. Inappropriate, said the State Department. The National Council of Churches called them appalling to the point of disbelief.”

Barry Lynn, American's United for Separation of Church and State: “I do think this is just the kind of political and religious fanaticism that leads to violence throughout the world.”

Faw: “But today there was no apology, no comment whatsoever, from the founder of the Christian Coalition, and a one-time presidential candidate once suggested Saddam Hussein also be assassinated, and that the State Department be blown up with a nuclear device. Islam, he once said, is a Christian heresy.”

Host of 700 Club in 1985 video: “You are not saying there are no other people qualified to be in government or whatever if they're not Christians or Jews?”
Robertson on1985 video: “Yeah, I'm saying that. I just said it.”

Faw: “Robertson has gotten into hot water, not just because of what he said -- urging Christians, for example, to get mad and take back the nation -- but also because of what he's done. Like using his religious TV network to help pedal 'Pat's Diet Shake,' the recipe, he says, he devised himself. Or like denouncing gambling while owning an expensive racehorse.”

Ole Anthony, identified on-screen as “critic of televangelists”: “He is violently against abortion, yet he's encouraging support of the Chinese government, which has forced abortions. What I'm troubled by is the hypocrisy.”

Faw: “And now comments further inflaming tension between Caracas and the United States, the number one buyer of Venezuelan crude, from a man of God who doesn't calm waters, but roils them.”