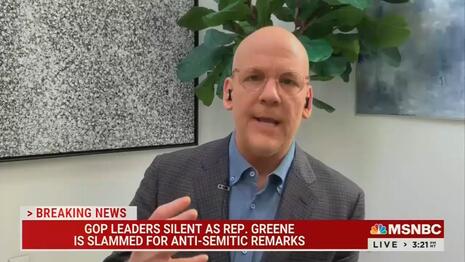 Appearing as a guest on Monday's Deadline: White House, MSNBC national affairs analyst John Heilemann threw stones in the MSNBC glass house as he hypocritically slammed the GOP over Georgia Congresswoman Marjorie Taylor Greene making a kooky comparison between wearing masks during the pandemic and the Holocaust, and House Republican Leader Kevin McCarthy had yet to condemn her. (He called her statements "appalling" on Tuesday morning.)

Picking up on the hyperbolic comments made by one of more than 200 House Republicans, Heilemann declared that the Republican party is nothing but a "big, ugly hate machine," and that "the only thing that runs the GOP is hate."

But, a few years ago, as he appeared on MSNBC's Morning Joe show to discuss the Donald Trump administration separating children from illegal immigrant parents, Heilemann passively went along with host Joe Scarborough when he likened the situation to Jewish children being taken to gas chambers in Nazi death camps.

In his analysis on Monday afternoon, Heilemann repeatedly used the word "hate" as he asserted:

The entirety of the thing that animates now, the Republican party, which is to say, the thing that George Will is talking about, what is the Republican party? It's now its basest part of its base, and the basest part of its base is animated by hate. And it's very hard to make a distinction between one kind of hate and another kind of hate.. If you're Kevin McCarthy, you start denouncing hate, where are you going to stop?

Because once you start to denounce this kind of hate, and you take a stand, you now -- you're now surrounded by all kinds of hate, and the only thing that runs the GOP is hate. It's now a big giant hate machine. so of course he can't denounce her for this because once he denounces her for this, where are you going to stop? You'd have to denounce the entire party because that's all it is. That's all it is -- a big, ugly hate machine.

Host Nicolle Wallace then gave no pushback as she approvingly thanked him for joining in on the segment and wrapped up.

But, on June 15, 2018, Heilemann had no problem with absurd Holocaust comparisons as he sat next to Scarborough, who claimed:

I mean, that would be better than "We're marching them to the showers -- they'll be right back," and then they never come back. But here, John Heilemann, they're just lying. And they're saying, "It's law -- we have to do it." And now they're bringing in the Bible while they're lying...

Heilemann went along with Scarborough's commentary without objecting:

JOHN HEILEMANN: I think there's a Commandment against the lying thing, right? Isn't that one of the 10?

SCARBOROUGH: There is a Commandment against the lying.

SCARBOROUGH: It's not biblically based that you rip children from the hands of mothers. In fact --

HEILEMANN: Not in either the New or Old Testament.

Heilemann's not religious. Scarborough made the obscene gas chamber reference several times over a couple of days.

Monday's Deadline: White House was sponsored in part by Rocket Mortgage. Their contact information is linked.