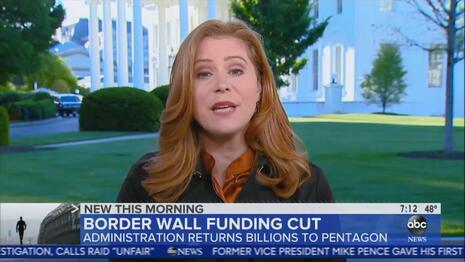 Parks used the usual Democrat spin that the Trump administration only built 80 miles of "new wall" and repeated the canard that the border crisis is Trump's fault.

Anchor Dan Harris began the report by recalling that the Biden administration would be sending funding back to the Defense Department that had been allocated by Trump for border wall construction.

DAN HARRIS: Meanwhile, here at home, the Biden administration is now moving to cancel funding for the border wall and return the funds to the Pentagon. ABC's White House correspondent, MaryAlice Parks, is on the South Lawn with that story. MaryAlice, good morning to you.

MARYALICE PARKS: Good morning to you, Dan. From day one, we've seen President Biden break away from President Trump's border policies. And now this latest move, the administration saying they are formally returning billions of dollars back to the Department of Defense that have been diverted for border wall construction. And like you said, they're planning to cancel all existing construction contracts there on the border wall.

The Trump administration only built about 80 miles of new wall where wall hadn't existed before.

Fact-checkers have noted this legalism, but also noted the reality that more than 400 miles of new wall have been built, with several hundred miles of improved wall replacing the shoddy, ineffectual barriers that were previously there. The argument that the improved border wall had reduced illegal crossings in those areas where it was built was totally ignored.

She then repeated the Jen Psaki spin pushing blame onto Trump without even trying to fact-check the claims:

Some Republicans -- as you can imagine -- are blasting the Biden administration, saying that this will exacerbate the migrant crisis. But the White House wrote in a statement that they inherited a broken immigration system that wasted billions of taxpayer dollars and neither kept the American people safe nor adhered to our values. Now, they say the money will go instead to daycares and schools on military bases. The big question now: What will happen to the wall overall? The administration says they're still reviewing all of it.

This blatantly ignores the illegal immigrants who credit Biden's dramatic easing of immigration enforcement as their reason for rushing the border. This is more repeating than reporting.

This shoddy journalism was sponsored in part by Edward Jones. Their contact information is linked.