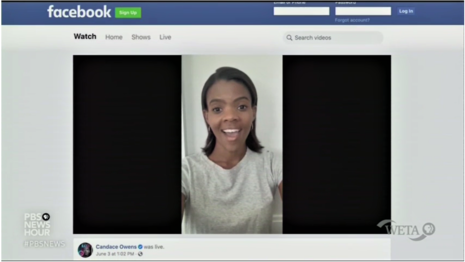 Friday's PBS NewsHour ran a report promoting the leftist campaign to boycott Facebook because it allows viral content that liberals don't like. But PBS really went too far this time.

When talking about what content is "spreading" like a bad rash on Facebook, they mentioned a popular commentary on Candace Owens, and then in the same sentence smeared it together with a couple of members of an extremist group who murdered black federal law enforcement officer Dave Underwood in California.

Anchor Judy Woodruff introduced the report by recalling that Facebook is "facing new pressure to change how it handles content" as some corporations have cut advertising on the site for the month of July. "With advertising making up 98 percent of Facebook's revenue, the company has seen its share value tumble in recent days. But it is not clear if that will lead to a change in policy."

STEPHANIE SY: While protesters were turning out in droves on streets across the United States to demonstrate against the police killing of George Floyd, a different movement was spreading on Facebook.

SY: One where a video by a right-wing activist saying racially motivated police brutality is not a real thing was racking up 92 million views, and one where like-minded extremists found each other before allegedly killing a Federal Protective Service officer in Oakland, California.

It's a flood of incidents like this that have sparked a coordinated effort to pressure Facebook to change what it allows on its platform.

They only showed three words from a recent Owens video in which, although it was not shown in the report, the conservative activist argued that, while she believes that Derek Chauvin should be prosecuted for his role in George Floyd's death, it is also wrong to laud Floyd as a role model given his long criminal history.

Owens also argued that there is not widespread discrimination against African Americans by law enforcement as journalists and other liberals commonly claim, and complained about the sometimes violent response by left-wing protesters. How this can be compared to cop-killing is anyone's guess.

Sy went on to show soundbites of liberal activist Jonathan Greenblatt from the Anti-Defamation League promoting the group's "Stop Hate for Profit" campaign to get corporations to boycott Facebook. Owens is apparently an "extremist" spewing "disinformation."

JONATHAN GREENBLATT, ANTI-DEFAMATION LEAGUE: What we hope to do is expose the fact that extremists again have exploited the platform, and they simply haven't done enough to combat conspiracy theories, disinformation, racism, anti-Semitism, et cetera.

SY: Jonathan Greenblatt is the national director of the Anti-Defamation League. It's one of the groups behind the Stop Hate for Profit -- a campaign for companies to pull advertising dollars from Facebook.

PBS can't label their fellow leftists. They're described as advocates for "civil rights" and "consumers" while they try to censor conservative content. They also failed to label Greenblatt as a former Obama White House aide.

Greenblatt's ADL has liberal blind spots, as well. Recent statements supporting anti-Semite extremist Louis Farrakhan by celebrities like Ice Cube and Chelsea Handler on social media have no mention on the ADL website...but they did notice Fox Soul canceling a Farrakhan July 4 speech.