On Saturday afternoon's CNN Newsroom, weekend anchor Fredricka Whitfield touted "shock and outrage" over the National Archives blurring part of a sign from the annual anti-Trump Women's March declaring "God hates Trump." In a plug before a commercial, Whitfield hyped: "Shock and outrage over a doctored photo from the 2017 Women's March. The National Archives accused of altering history by erasing images in a picture."

Lauding the photograph of the sign as an "iconic image," Whitfield seemed surprised when Bernice King -- daughter of Dr. Martin Luther King Jr. -- was critical of the sign itself and not so much of the National Archives for censoring it.

WHITFIELD: So when you see an image -- what has become an iconic image of the 2017 gathering of a million people, you know, from coast to coast, for this Women's March, and you see it doctored, and it is at, you know, the Archives -- the National Archives -- what's your reaction to the Archives doctoring an image, a depiction of history.

BERNICE KING: You know, I can't, I'm not an archivist, so I can't speak to, you know, the importance of making sure documents have their historical accuracy, so I can respect whatever opinion that they give in regard to that. When I look at the image, period, I'm disturbed by the image itself.

WHITFIELD: What do you mean?

KING: Because "God" and "hate" can't go in the same paragraph or sentence. God is love, so God would never hate anyone who even is a hater or people call them racist or evil, because God is love. God's desire is that everyone would come to a certain place.

Whitfield followed up by trying again to get King to criticize the censorship as the CNN host likened it to those who tried to censor Dr. King during the Civil Rights Movement: 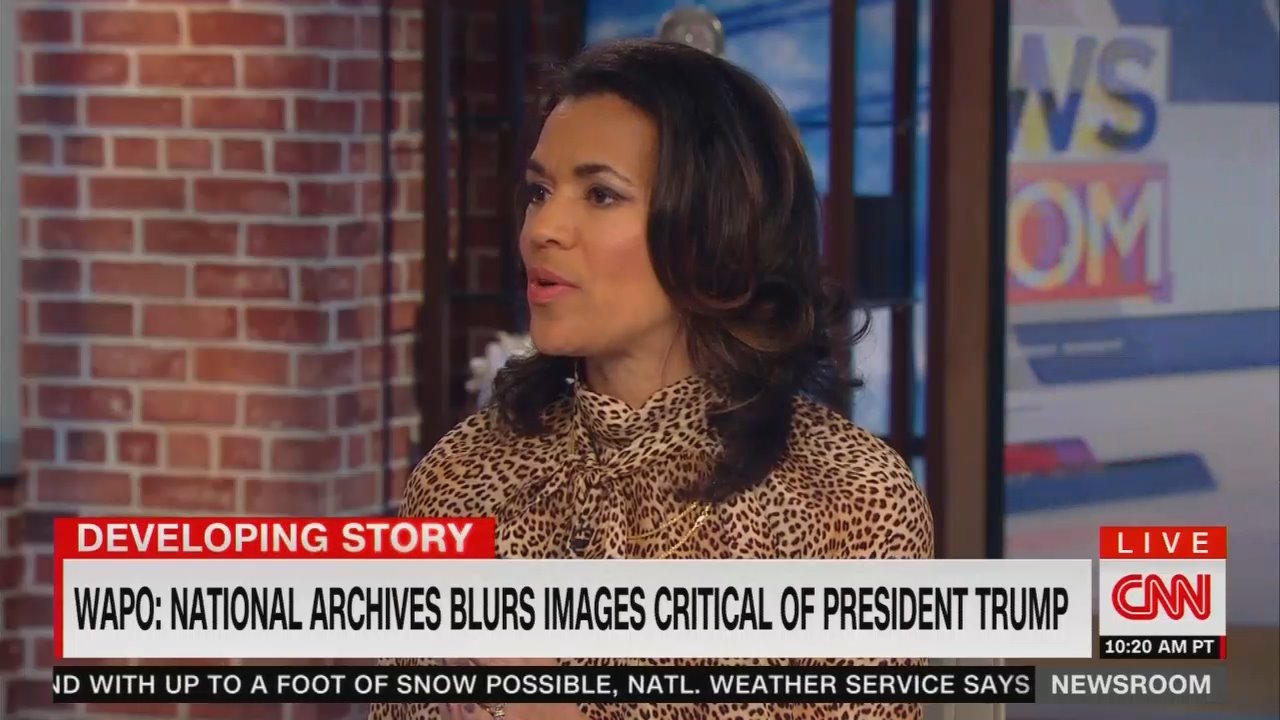 WHITFIELD; So in that picture, one of the posters that was held up, it said -- the reality of that moment is someone has an image that says "God hates Trump," and the image you see here on the right of your screen, the censored portion -- the name Trump was taken out. And there were other references is there were other -- there was another poster that said, you know, "Trump and GOP -- hands off women," and the name "Trump" was kind of blurred out.

So, you know, the dispute is over whether it was appropriate, you know, to, whether it's an attempt to erase history or change, you know, a documentation that shows a moment of history. You know, your dad and foot soldiers alongside him dealt with all kinds of other efforts to erase their efforts -- change history -- distort the truth. Do you see a parallel here?

When Whitfield had spoken earlier with Purdue's Professor Kline, she gave a response more in line with what the CNN host seemed to be looking for: "As a historian, I was shocked. We place so much value on the artifact -- on the historic documents that we work with -- and the idea that there would be any messing with any primary source documents was shocking to me."

CNN not only had trouble imagining "God hates Trump" could be seen as offensive, they could not imagine that it was quite partisan for the National Archives to be promoting contemporary images of feminist protest against the current president as part of an impressive historical trajectory in line with the women's suffrage movement of the last century.