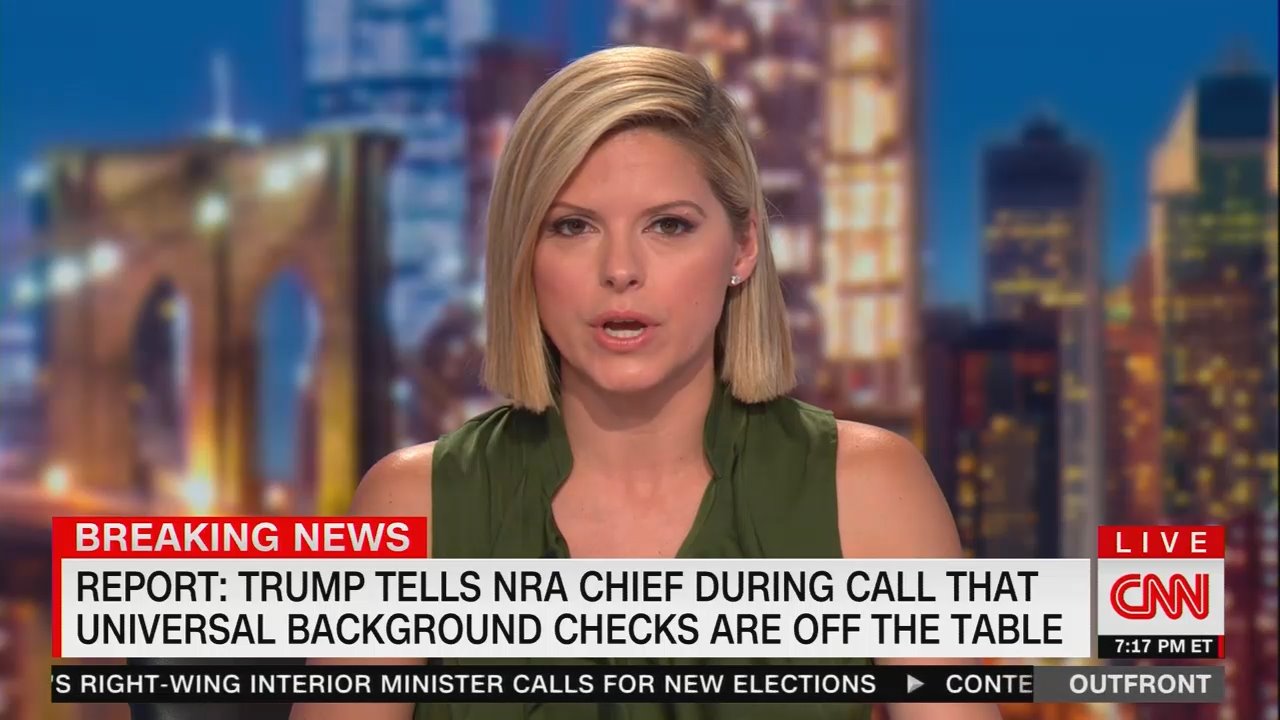 On Tuesday's Erin Burnett Outfront on CNN, fill-in host Kate Bolduan twice employed the lame "if it saves one life" argument that's typically not used on other issues as she made Republican guest Rob Astorino debate both her and liberal CNN contributor Aisha Moodie-Mills on gun control.

Instead of having a discussion on the merits of whether gun control would help matters, Bolduan was more fixated on President Donald Trump backing off his earlier calls for more background checks.

At 7:18 p.m. Eastern, Bolduan started by asking Astorino if President Trump was "caving to the NRA" on the issue, leading Astorino to argue that "background checks would not have prevented just about 90 percent of these mass shootings." Bolduan pushed back: "Nothing prevents 100 percent of the time, but you know what I've heard from Republicans -- some Republicans on Capitol Hill? That if it does something, it's a good thing after what they saw in El Paso and Dayton."

Astorino -- who is also a CNN contributor -- may have been understating his case since crime researcher John Lott has argued that none of the mass shootings that have targeted public places would have been stopped by expanding background checks to private purchases, which is what gun control advocates want.

Moodie-Mills soon jumped in to call President Trump a "clown" who "literally does not care about lives" as she also called the NRA a "lobby of death."

Host Bolduan did not bother to label her comments as "incendiary" until Astorino complained about it moments later as the CNN host was trying to get him to answer her question instead of address his liberal colleague's comments.

Moodie-Mills and Bolduan also misleadingly claimed that President Trump made it easier for the mentally ill to get guns:

AISHA MOODIE-MILLS: He came into office and essentially rescinded the background checks that the Obama administration tried to move forward.

KATE BOLDUAN: That would have put more restrictions on people with mental illness.

MOODIE-MILLS: He actually dialed that back by executive order.

Toward the end of the segment, after Astorino brought up the large number of murders in Chicago, Bolduan started ranting:

Stop asking me questions! Well, I'm going to ask the question. I get really tired when I ask you a question, you guys keep trying to change it to another topic. We can talk about Chicago tomorrow. Right now, I'm talking about how President Trump has backed down from something that he promised.

After Astorino jumped in to argue, "He didn't promise -- he suggested," she continued:

Not even close to suggested. "We can get it," and he says Mitch McConnell wanted it. If he was making that up, may be. But that's what I'm asking right now, is if he's changing his position, why he's doing it, instead of talking about Chicago.

After her GOP guest argued that background checks would not have reduced the death toll in Chicago, Bolduan repeated her argument about saving just one life: "If saving one life because of background checks -- would keep somebody from getting a gun, that doesn't matter?"

As previously documented by NewsBusters, there is reason to believe that well over 1,000 people are killed by non-citizens-- mostly illegal immigrants -- each year, but journalists and other liberals would never argue in favor of building a wall to help save a thousand lives, but are willing to argue "if it saves just one life" to argue for a liberal agenda that would put limitations on the rights of American citizens.