After conspicuously giving scant notice to the murder of a Baltimore police officer last week while ABC, CBS, NBC and FNC provided more attention, CNN has only gotten worse as it has so far ignored a second high-profile cop killing -- this time near Pittsburgh -- which is getting substantial attention on news shows elsewhere.

Additionally, TV One's News One Now program finally took notice of the Baltimore killing on Monday after ignoring it last week, although the show did not mention the cop killing in Pennsylvania.

On Friday night, police officer Bryan Shawn was shot and killed near Pittsburgh, and manhunt for the suspect -- Rahmael Holt -- is still under way. FNC's Fox and Friends -- which has given updates on the Baltimore killing every day since Thursday morning -- has also given updates each day on the Pennsylvania shooting since Saturday morning.

On TV One's News One Now, host Roland Martin buried the Baltimore police shooting an hour and 45 minutes into the two-hour show in a one-minute report.

Below are complete transcripts of the relevant reports from ABC's World News Tonight from Sunday, November 19, and TV One's News One Now from Monday, November 20: 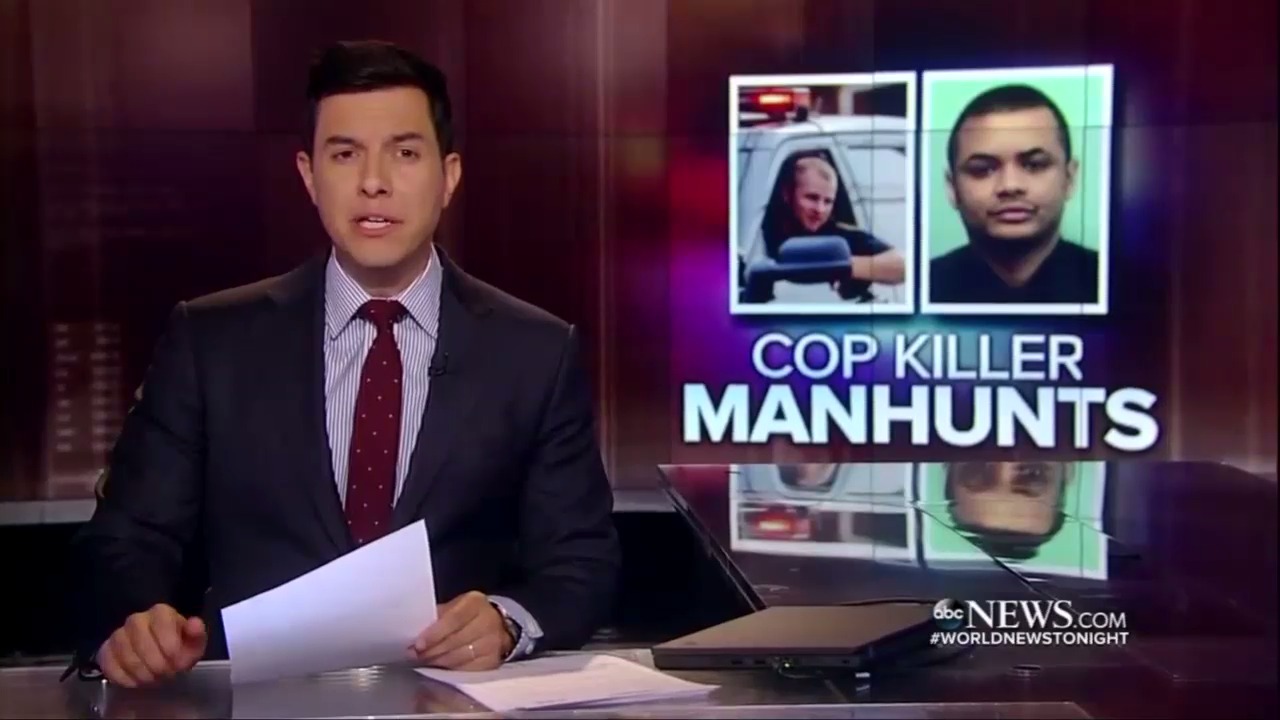 TOM LLAMAS: And we're following two different manhunts tonight -- both suspects of killing police officers in separate incidents. Offices in Western Pennsylvania on the hunt for this man, said to be armed and dangerous. The reward for his capture growing to more than $43,000. This as police in Baltimore ramp up their search for the man who fatally shot a detective in the head.

ADRIENNE BANKERT: Tonight, the manhunt in two states for separate cold-blooded cop killers intensifying. ... In Pennsylvania, police searching for this man -- 29-year-old Rahmael Holt -- after finding a car that they believe was involved in the shooting death of Officer Brian Shaw -- Shaw 25 years old and on the force for less than six months, killed during a routine traffic stop outside of Pittsburgh.

THOMAS GUZZO, MAYOR OF NEW KENSINGTON, PA: I know that they are working tirelessly to find this person.

BANKERT: And in Baltimore, officers putting a perimeter around this neighborhood for, quote, "crime scene preservation," still searching for whoever shot homicide detective Sean Suiter Wednesday. ... Authorities say Suiter was shot in the head while investigating a murder case. Police now offering a $215,000 reward for any information leading to the capture of his killer.

LLAMAS: And Adrienne joining us live tonight from Pennsylvania. And in this case, the public is asking for the public's help in a major way.

BANKERT: Absolutely, Tom. Here at the police station, officers tell us they've received a multitude of calls, but they need more. Anything that will lead to that suspect's capture and the recovery of the murder weapon. The chief saying Officer Shaw died after being shot in the chest, even though he was wearing a bullet-proof vest.

ROLAND MARTIN: In Baltimore, they're offering a $215,000 reward in hopes of catching a gunman who shot and killed a Baltimore police detective. Police say 43-year-old Sean Suiter was investigating a triple homicide last Wednesday when he spotted someone acting suspiciously. He approached the man, and that's when the man shot him in the head. The married father of five died the next day.

There's now a manhunt under way to find the killer. Officers locked the neighborhood down for six days to conduct a search. City officials say this is the second Baltimore police officer shooting in a month. This is the third year in a row that there have been more than 300 homicides in Baltimore which, of course, Suiter was investigating.

MAYOR CATHERINE PUGH (D-BALTIMORE): As I said last night, violence in the city is out of control, and I think Jack Young said it best last night: I'm sick and tired of being sick and tired. We need to stop the violence.

MARTIN: Today police plan to clear the crime scene and lift the lockdown, which some say involved excessive patdown searches.