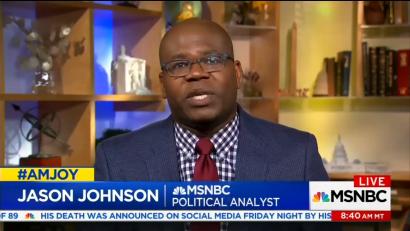 The Root politics editor Jason Johnson has been making regular appearances as a guest on both CNN and MSNBC for the past few years to give liberal political commentary, but now he appears to have tied the knot of sorts with MSNBC as he has just recently attained the status of "contributor."

Just in the last couple of years, the race-obsessed Johnson has been known for repeatedly tying Republicans to the KKK and linking Steve Bannon to "terrorist groups"; and he even provocatively quoted a source recently who called the mayor of St. Louis a "f***ing white woman" to bolster an article in which he whined about a white Democrat being elected in the black-majority city.

As previously documented by NewsBusters, Johnson has repeatedly tried to tie President Donald Trump and other Republicans to neo-Nazis, the KKK, or "white nationalist terrorists" again and again in his appearances on CNN and MSNBC. He even penned an article last year devoted to likening Trump to Adolf Hitler.

And in an article at TheRoot.com from just a few days ago, in just the third sentence, the race-baiting continued as he declared that "America is, at its core, a nasty, venal, selfish and racist culture," and soon added that "the long arc of history has generally bent toward crushing the necks of poor, weak and, especially, African-American citizens."

A bit later, he asserted that Trump voters "didn't elect Donald Trump to fix America, they elected Donald Trump to make sure that as America falls, white folks go down swinging." Later on, after referring to Trump as a "temper tantrum" for such voters, he added: "This is why Trump voters are still angry. Why they're still stabbing college students and hanging nooses and protesting at Confederate statues..."

Imagine if anyone generally referred to "Clinton voters" or "Obama voters" as people who murder police officers or perpetrate other heinous acts.

And as if there were not enough race-baiting in the article already, he then proclaimed that Trump voters "know that she" -- presumably referring to Hillary Clinton -- "dated a black guy for eight years and she liked it, and she still thinks about him. Why do you think conservatives are always calling their enemies 'cuckholds'? It's projection."

The far-left analyst's rant concluded: "They just want to make sure they go down swinging, and if that drives the rest of the world off the cliff, so be it. At least the black guy won't be at the steering wheel."

With his wildly over the top history of far-left bias, Mr. Johnson should fit in quite well at MSNBC: