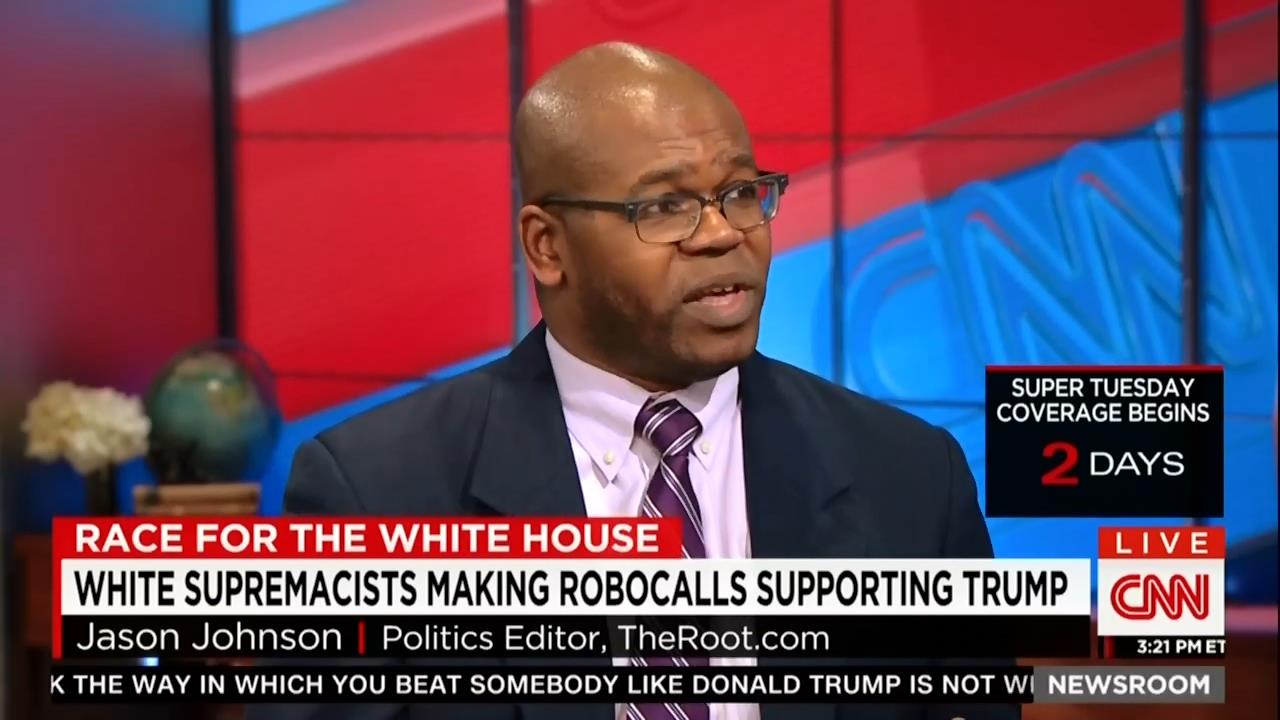 Appearing as a guest on Sunday's CNN Newsroom with Fredricka Whitfield to discuss Donald Trump declining to condemn former KKK leader David Duke in a CNN appearance earlier in the day, Jason Johnson of TheRoot.com not only repeated a discredited claim that Louisiana Republican Rep. Steve Scalise spoke to a white supremacist group in Louisiana in 2002, but he even gave the impression that Scalise spoke to the KKK "a couple of months ago." Johnson: "First of all, Fredricka, they can't be disingenuous. Steve Scalise was speaking to the Klan -- we were just talking about that a couple of months ago. So it's not like the Republican party hasn't played footsy under the table with white supremacist groups."

CNN host Fredricka Whitfield not only did not correct him, but actually nodded her head as he made the claim.

At 3:21 p.m. ET, Whitfield posed to Johnson a question regarding whether it would hurt Republicans if they try to derail Trump from securing the Republican presidential nomination:

And so, Jason, you see, you know, in the New York Times today, the GOP, there is this concerted effort to stop Donald Trump, according to their reporting, so a moment like this, how does this potentially backfire for the GOP if there is indeed this concerted effort in a land of democracy to say you're not the guy that we want, you're not the one to represent the party, we don't want you to win?

Johnson, politics editor of TheRoot.com, tried to link Republicans to the KKK as he began:

First of all, Fredricka, they can't be disingenuous. Steve Scalise was speaking to the Klan -- we were just talking about that a couple of months ago. So it's not like the Republican party hasn't (Fredricka Whitfield starts nodding her head) played footsy under the table with white supremacist groups.

And I will use their similar rhetoric. I don't want to hear "white supremacists." Call them "terrorists" because the KKK is a terrorist organization, and that's how it should be described.

But Johnson then warned Republicans against trying to "cheat" Trump out of the GOP nomination as he concluded:

But ultimately, we've got to remember this:  You -- it's like if you're a boxer, right? You don't want to win on points. You want to knock somebody out. If the Republican party tries to cheat Donald Trump out of this nomination by changing the rules or changing the scheduling, it will blow up in their faces. They need to let this process go out. And if he loses, great, and if he wins, he's got the nomination, and you got a race on your hands.

The story about Rep. Scalise speaking to a racist group originated in December 2014 with a liberal blogger who claimed that the Louisiana Republican spoke at a convention for the European-American Unity and Rights Organization -- founded by white supremacist and former KKK leader David Duke -- in the congressman's home state in 2002.

Even though the man who booked hotel space for the convention, Kenny Knight, has claimed the event Rep. Scalise spoke to was a separate event for his local community group which he held in the same hotel to take advantage of the available space, while a flyer for the convention shows no sign that Scalise was one of the scheduled speakers, the CNN guest still tried to use the story to connect Republicans to the KKK.