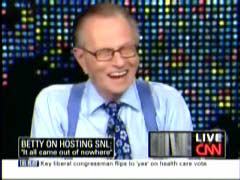 During an interview on Wednesday’s Larry King Live on CNN, actress Betty White recounted a controversial joke from October 2008 when she called Sarah Palin a "crazy b****" during an appearance on CBS's Late Late Show with Craig Ferguson as she pretended to be then-presidential candidate John McCain’s speechwriter for a skit. Her recitation of the line inspired laughter from host King, as he praised the actress as having "good delivery." White also informed King that the line had been written by Ferguson or his writers as it was part of a pre-planned sketch.

LARRY KING: Sarah Palin – you stirred up a little fuss a while back when you called her, on a late night TV interview, a "crazy bitch." 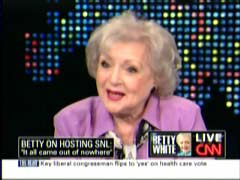 BETTY WHITE: Well, that was written – it was Craig Ferguson – and we all-

KING: He wrote that for you?

WHITE: Yeah, they wrote a lot of stuff for me.

KING: I thought that was an impromptu interview. I’ve done Craig. They don’t-

WHITE: Well, it was – but we do little sketches, and I’ve played different characters, and I was John McCain’s speechwriter. And so he – Craig said, "Well, I understand he doesn’t use a computer."

Recountng her own line, White continued:

WHITE: "He communicates by carrier pigeon. The only trouble is, Sarah Palin keeps shooting them down. (KING LAUGHS) That crazy bitch."

#From the October 2008 Late Late Show with Craig Ferguson on CBS:

CRAIG FERGUSON: When Senator McCain is on the road, how do you get the speeches to him? Because we know he doesn't use computers, so how does he actually, you know, communicate?

BETTY WHITE: Well, you can't blame him for not using computers. But, no, John likes to do all his commuicating via carrier pigeon.

FERGUSON: Carrier pigeon? Does that work?

WHITE: Oh, absolutely. Although lately we've been having a problem with Sarah Palin shooting them down. (AUDIENCE LAUGHTER) That is one crazy bitch.

FERGUSON: Speaking of Governor Palin, she's really revitalized the campaign, but some have accused the Obama camp of being sexist. What do you think about that?

FERGUSON: All right, Betty. You know what? We're out of time. Betty White, everybody.