Nate Silver Goes Out on a (Left) Limb

One thing that you have to admire about Nate Silver is that he isn’t afraid to go out on a limb.  As an example of that, the New York Times political soothsayer currently projects Barack Obama winning the popular vote by 1.7%.

That would place him well on the left side of most current polling.  The below histogram shows the distribution of the spread between the two candidates in each of the ten polls that make up the RCP Average on the day of his prediction, October 29. 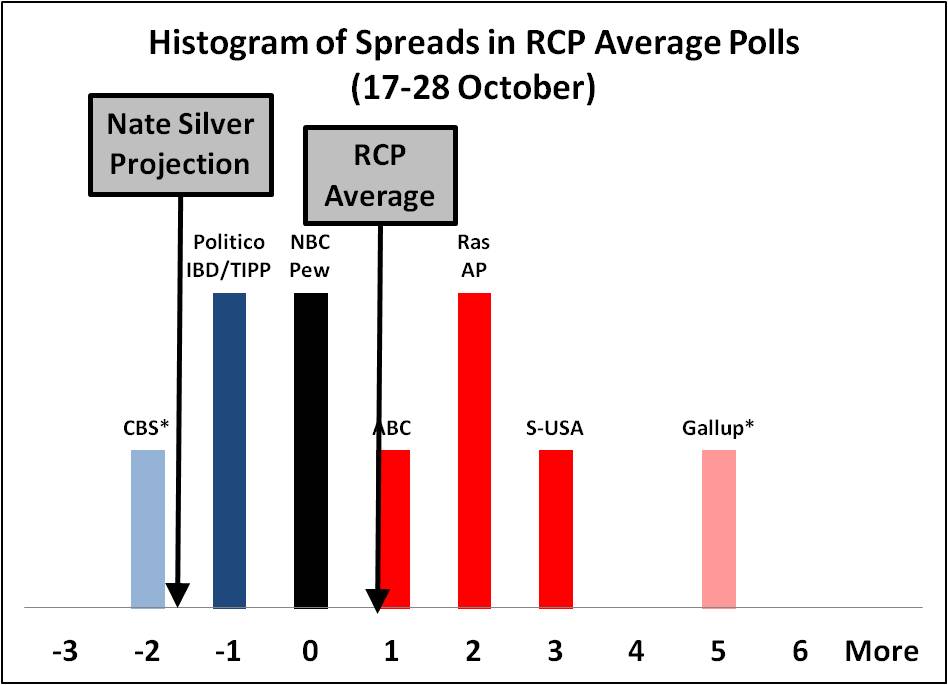 There are five polls showing a Romney lead, three showing an Obama lead, and two ties.  The RCP Average has Romney winning the national vote by 0.9%.  (Since many polls use a 90% confidence interval, and that means that the remaining 10% of the time, a poll will be outside the margin of error, I’ve isolated the highest and lowest polls from this sample.  Even by eliminating the effects of those outliers, that still makes the adjusted average a Romney lead of .75%.)

Nate Silver’s projection that the spread will be 1.7% in Obama’s favor is a full 2.6 points larger than the RCP average.  That is quite an outlying position.

However, remember that I keep saying to ignore the spread and to look instead at the incumbent’s level of support.  By that metric, Silver’s estimate is even more extreme.  Below is the histogram of those same polls and where they show Obama’s numbers right now.  The RCP average of Obama’s support sits currently at 46.7%.  But Nate Silver projects the President to finish with 50.4%, nearly four points higher than today. 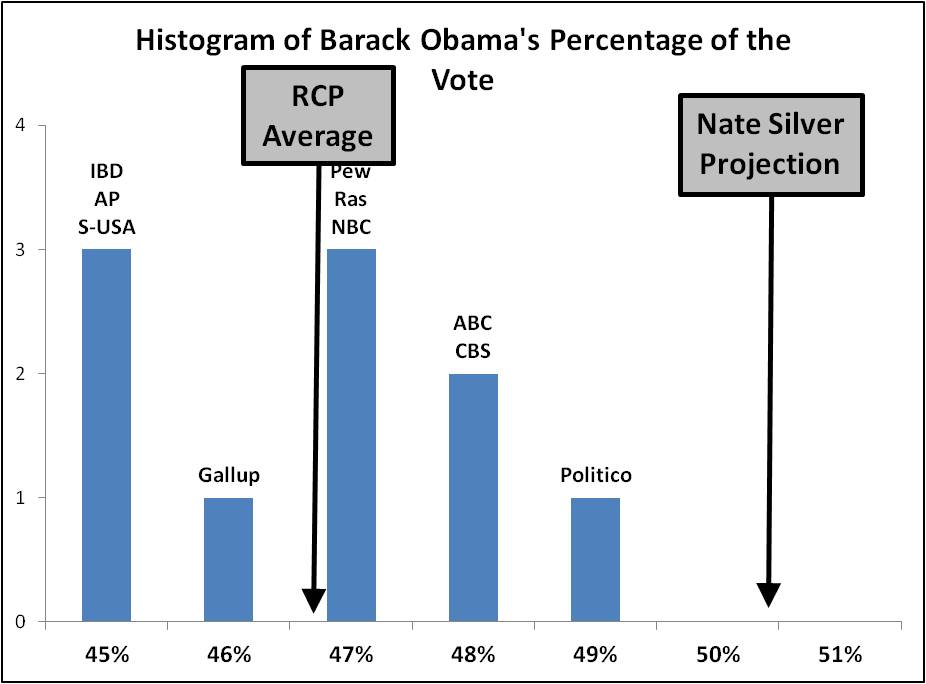 Now, to be fair to Silver, there are still undecided voters, some of whom will break in the President’s direction.  If we assume that about one-percent of the electorate is going to vote for a third-party candidate (an assumption Silver makes as well), then the current RCP average leaves 4.7% of voters still undecided.  However, for Barack Obama to go from 46.7% today to the 50.4% that Nate Silver projects a week from now, it would require that he get 79% of the remaining undecided vote.  That’s certainly going out on a limb.

Either nearly every public poll we currently see is vastly over-reporting Republican strength (a result opposite of what occurred just four years ago) and Nate Silver is the greatest prognosticator of our time, or Nate Silver will be the one eating crow on election night.  In a week we will see which one it is.

Dylan Byers is skeptical as well.  Read the comments.  I’ll sum up most of them in three words:  appeal to authority.

This is shaping up into a battle of old versus new.  Long time polling stalwart Gallup reports this huge bombshell of news

“Romney currently leads Obama 52% to 45% among voters who say they have already cast their ballots.”

If that is the case, Mitt Romney is crushing this race.  On the other hand, Gallup was 20th of 23 polling organizations analyzed four years ago, while Nate Silver, who was born a mere three years before George Gallup died in his 83rd year, got 49 out of 50 state races right.  Needless to say, both pollsters know that they have a lot riding on this race.  Will this be a case of a new type of methodology winning out over the old?  Or will the neophyte get his comeuppance?