STUDY: Twitter Files Make Up Less Than 0.5% of Coverage on CNN, MSNBC 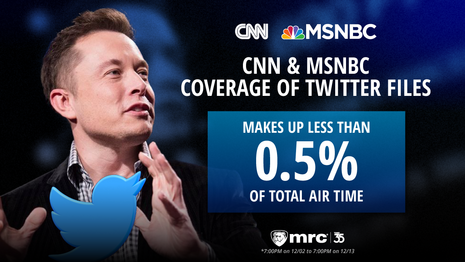 NewsBusters has found liberal cable news networks CNN and MSNBC have almost completely ignored the first five installments of the Twitter Files, which revealed Twitter employees engaged in rampant censorship of conservatives. Since the first set of documents were published on the evening of December 2, less half of one percent of the coverage on either network has even bothered to mention the story.

MRC analysts examined all regular programming on both CNN and MSNBC between 7:00 p.m. Eastern on December 2 and 7:00 pm ET on December 13. Not including commercials, MSNBC aired approximately 133 hours of news during that period, of which only 0.26 percent (1,253 seconds) included any mention of the Twitter Files. Of the approximate 130 hours of non-commercial time on CNN during the same span, just 0.34 percent (1,574 seconds) dealt with this topic.

In addition to receiving a paltry share of the total coverage on these cable networks, the Twitter Files were not even mentioned during the majority of airtime in which the social media platform was discussed.

MSNBC aired nearly two hours (114 minutes) of content involving Twitter, of which 81.7 percent contained no reference to the Twitter Files, either by name or implicitly. For CNN, Twitter-related content comprised 78 minutes, and the files were excluded from 66.4 percent of that.

Instead the majority of Twitter coverage on both networks was spent worrying that CEO Elon Musk was destroying the platform by permitting “hate speech.” On MSNBC, this topic received nearly three times as much attention (3,388 seconds), and on CNN it received nearly double (2,767 seconds).

When journalists on these cable networks did bother to discuss the Twitter Files, their framing was overwhelmingly critical. The video below is a representative slice at what little coverage there was:

On December 3, MSNBC host Symone Sanders began a discussion about the document dump by alleging, without evidence: “First of all I just have to say that this whole thing is just ridiculous, and it’s not true.”

CNN’s Christine Romans on December 5 portrayed the idea of censorship by Twitter staff as a conspiracy theory: “What some want you to think is that this is censorship by big tech. That’s why the [former] President [Donald Trump] is saying you should throw out the Constitution.”

More recently, journalists have insinuated that the mere publication of these documents represents a threat to the lives of former Twitter staffers.

The notable exception to this trend was CNN’s Michael Smerconish, who was uniquely objective in his coverage of the document dump. On December 3, he dedicated a full ten minutes of his eponymous Saturday morning show to the first installment published by Substack journalist Matt Taibbi, and was the only CNN host to actually display some of Taibbi’s tweets on-screen.

For this study analysts examined both Nexis transcripts and Snapstream recordings of all shows airing between 6:00 a.m. and 12:00 a.m. ET on CNN and MSNBC. To determine the amount of non-commercial programming that aired on these networks between December 2 and December 13, analysts went through each show on three randomly-selected days for both networks and calculated the total number of seconds not taken up by advertisements, then extrapolated the average across all 11 days included in the study.