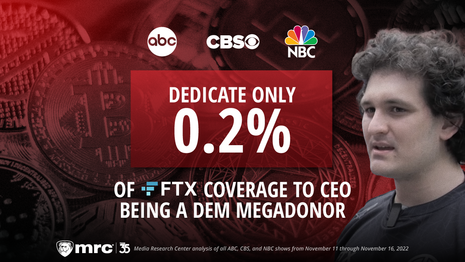 Sam Bankman-Fried, the embattled CEO of failed cryptocurrency exchange FTX, was a massive donor to the Democratic Party. But you wouldn’t know it from the reporting on the big three broadcast networks (ABC, CBS, and NBC), who have so far almost completely hidden that salient detail from their audiences.

MRC analysts examined all FTX coverage between November 11 and November 17 on those broadcast networks’ flagship morning and evening news programs. We found that neither CBS nor NBC even mentioned Bankman-Fried’s status as a Democratic megadonor, while ABC spent only three seconds (a single mention) on it.

All told, discussion of Bankman-Fried’s extravagant bankrolling of the Democratic Party comprised just 0.2 percent of the combined 21 minutes and 17 seconds of FTX coverage across all three networks, and 0.5 percent of ABC’s 9 minutes and 7 seconds of coverage.

Over the past week, ABC has run two full-length segments about FTX on Good Morning America and one on World News Tonight. While the first report identified Bankman-Fried as “one of the biggest political donors in the U.S.,” reporter Rebecca Jarvis conveniently glossed over which party those donations were going to.

Bankman-Fried was one of the biggest donors to the Democratic Party during the last election cycle — second only to George Soros. According to reports, he spent more than $10 million supporting President Joe Biden in 2020, and he reportedly planned to spend between $100 million and $1 billion in the 2024 election.

That lofty sum is unlikely to materialize for the Democrats now that FTX has gone belly-up. With the exchange reportedly under multiple investigations, many of its backers lost substantial fortunes during the bank run that eventually rendered the company insolvent.

Bankman-Fried’s mother recently served an undisclosed role at Mind the Gap, a pro-Democrat dark money group. On Wednesday, she reportedly left the organization amid the fallout from her son’s scandals. In addition, it has been theorized that Bankman-Fried’s cozy relationship with Democrats was intended to result in cryptocurrency regulations that would have benefited him and his organizations financially.

It goes without saying that, if a pivotal Republican donor were embroiled in a financial scandal of this magnitude, his political affiliation would be front and center in the media’s reporting.