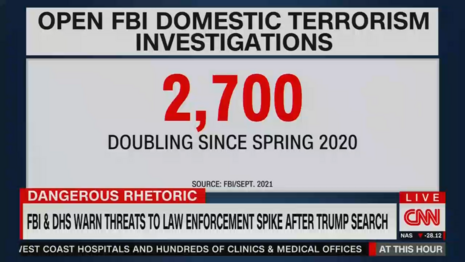 On the Monday edition of CNN’s At This Hour, host Kate Bolduan emphasized the FBI’s 2700 open domestic violent extremism (DVE) cases, noting that this figure was “more than double” what it had been in 2020. Notably absent from the segment was any discussion of recent FBI whistleblower reports, which alleged that agents were being pressured to artificially inflate the number of open DVE investigations to please top officials at the Bureau.

The segment featured disgraced former-FBI Deputy Director Andrew McCabe (now a paid CNN analyst), who complained at length about Americans’ souring view of the his former employer. “I’ve never seen anything like this in my 21 years with the bureau,” he remarked, adding, “It’s just terrifying.”

Bolduan then brought up the DVE statistic: “I’m sure it’s more now, but the latest data have is the FBI has about 2,700 open domestic terror investigations, which is double since Spring 2020.”

She quickly pivoted to a discussion about what the FBI was doing “to protect agents while they are doing this most important work,” but let’s dwell in that figure for a moment.

According to alleged whistleblowers within the Bureau, agents are being pressured to reclassify cases as DVE investigations despite many such cases not meeting the necessary criteria. On July 27, Congressman Jim Jordan (R-OH) sent a letter to FBI Director Christopher Wray, detailing these allegations:

Another whistleblower—who led at least one high profile domestic terrorism investigation—stated that a field office Counterterrorism Assistant Special Agent in Charge and the FBI’s Director of the Counterterrorism Division have pressured agents to move cases into the DVE category to hit self-created performance metrics.  According to whistleblowers, the FBI uses these metrics to dispense awards and promotions. Every whistleblower has called it an environment of “pressure” within the FBI.

That’s all pretty damning, if true. Unfortunately, it looks like Bolduan will never bother to tell her viewers about these alleged whistleblowers. After all, what better time to bring them up than during a discussion of the recent uptick in DVE cases based on the FBI’s own numbers?

Those on the left defending the FBI have brushed off these recent whistleblower reports, claiming Jordan’s status as a known Trump-defender automatically destroys his credibility. Evidently Bolduan and her producers harbor that view as well.