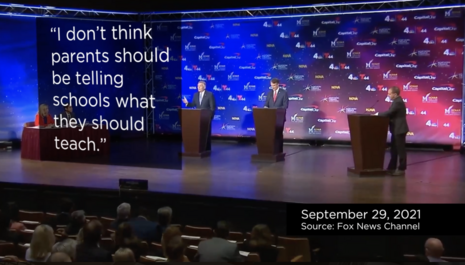 Imagine a children’s library book so explicit that its content isn’t even allowed on late-night television.

The nonprofit advocacy group Independent Women’s Voice (IWV) recently released an advertisement which included an image from a library book found at a Virginia public high school. When they attempted to buy late-night ad space for it on the three major broadcast networks (ABC, CBS, and NBC), all three outlets refused on the grounds that the image violated federal decency standards.

IWV Vice President Carrie Lukas remarked that while the book had been found in multiple Virgina public high school libraries, its art and writing style seemed to be aimed toward a younger demographic: “This isn’t targeting seniors. This is targeting freshmen and younger.”

When IWV learned of the book, they crafted an advertisement intended to inform parents about the extent to which radical progressive dogma has entrenched itself in public education. According to Lukas, the networks’ refusal to air the ad didn’t come as much of a shock: “We’re hoping to get one of these on the air. We’re not surprised that the first one was rejected, but we think it’s pretty telling.”

This whole episode begs the question, if it’s too explicit for adults watching late-night television, what is it doing in a library for children?

And while the broadcast networks are compelled to adhere to federal standards governing profanity, they don’t seem to have much sympathy for parents concerned about what their children are being taught in school. When a group of parents filed a lawsuit against Attorney General Merrick Garland’s office for equating their protests against their school board to “domestic terrorism,” the networks gave the story no coverage whatsoever.

Likewise, all three networks thus far have completely ignored the rape of two teenage girls by a student abusing the school’s transgender locker room policy. They were plenty happy to shame any lawmaker who dared to question the merits of such policies, but they have no interest in discussing the resulting consequences.

You don’t have to think very hard about this one to see the irony.