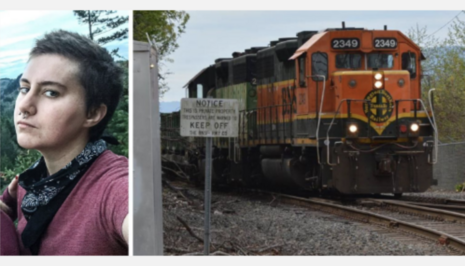 It’s been nearly a week since a former field organizer for the Washington State Democrats was found guilty of terrorist attacks and violence against a railroad carrier; and so far, the liberal TV networks have not given the story a solitary second of airtime.

In December of 2020, antifa “activists” Samantha Frances Brooks and Ellen Brennan Reiche were indicted on terror charges after placing disrupting cables (or shunts) on train tracks near Bellingham, Washington. This caused a train carrying hazardous materials to decouple from some of its cars, which, according to authorities, could have led to a dangerous derailment in a residential area.

Yet despite the media’s professed interest in domestic terrorism stories, they refuse to give this one any coverage whatsoever. None of the liberal cable (CNN, MSNBC) or broadcast (ABC, CBS, NBC) networks have breathed so much as a word about this story as of September 14.

Brooks pled guilty back in July of this year, but Reiche opted for a jury trial, which ended with a guilty verdict on September 9. From the Associated Press:

They’re accused of putting a shunt on tracks near Bellingham in late November. Such devices consist of a wire strung across the tracks, mimicking the electrical signal of a train. The devices can cause trains to automatically brake and can disable railroad crossing guards, investigators have said.

Around that same time, the hysterical Antifa news blog It’s Going Down published an anonymous letter by someone boasting about placing shunts on railroad tracks. “YOU SHOULD DO THIS TOO,” the letter urged in large, bold font.

Here we have two convicted domestic terrorists who not only attacked public infrastructure and endangered lives in the process, but appear to have gone on to brag about it online and encourage others to follow their lead. And still not a peep from the media. Maybe Reiche's previous work with the Washington State Democrats has something to do with the TV news-wide blackout (but that's just speculation).