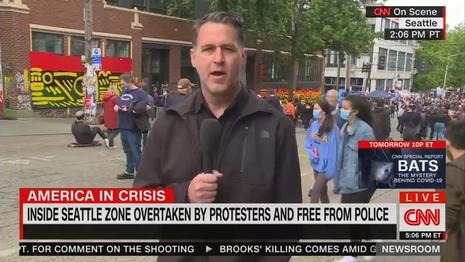 Liberal cable outlets CNN and MSNBC have been oddly protective of Seattle’s “autonomous zone,” which was set up in mid June by George Floyd protesters. Since then, those cable networks have stubbornly ignored the numerous reports of violence, lawlessness, and general mayhem in the autonomous zone, instead insisting that the situation is “peaceful” and “like a street festival.”

In reality, the autonomous zone (sometimes called CHAZ or CHOP) has played host to a slew of violent and illegal incidents. Just this past weekend multiple shootings occurred inside the area, leaving one dead and at least two others injured. Body camera footage released by Seattle police shows that officers were prevented from getting to one of the victims by a violent mob.

To see the media’s sanitized coverage compared with the actual state of Seattle’s autonomous zone, watch the video below:

As early as June 12, Seattle Police Chief Carmen Best told local reporters: “Rapes, robberies, and all sorts of violent acts have been occurring in the area that we’re not able to get to.”

But a day later Dan Simon, a correspondent for self-proclaimed “Facts First” network CNN, claimed on camera: “The facts on the ground indicate that this is an entirely peaceful situation.”

Well, that settles that.

Two days later, MSNBC correspondent Vaughn Hillyard asserted: “There has been no issues of violence.” And just the day after that, CNN correspondent Elle Reeve enthused: “It’s very chill here.”

Despite the wishes of these CNN and MSNBC reporters, this "street festival” has become so violent that Seattle's Mayor recently announced the city would soon shut down the whole operation.

It remains to be seen exactly how much violence needs to take place in Seattle’s lawless autonomous zone before spin artists like Simon and Reeve are willing to change their tune.