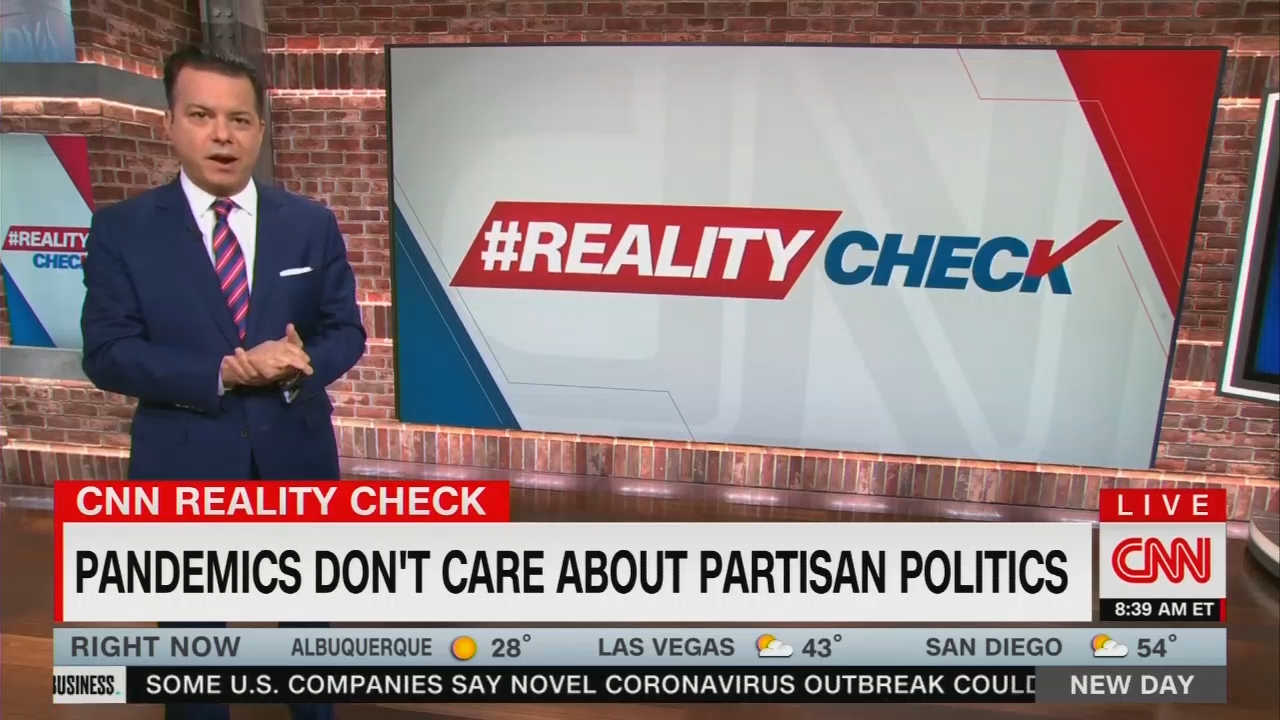 During national emergencies such as natural disasters or outbreaks of disease, the news media can serve as a valuable source of information for the public. Yet when it came to their coverage of the coronavirus on Thursday, CNN largely put their Trump-bashing agenda ahead of that important role.

MRC analysts identified 44 guest interviews on CNN between 6:00 am and 11:59 pm EST on February 27, 2020. Out of 136 questions that hosts asked about the epidemic, 82 (60%) invited guests – even medical specialists – to criticize the Trump administration’s handling of the epidemic. Questions asked of CNN-affiliated reporters and analysts were not included in this total.

Hosts often pressured guests who were reluctant to attack the administration. For example, Dr. Luciana Borio – the former Head of Biodefense and Preparedness at the National Security Council –  initially sidestepped one such invitation from At This Hour host Kate Bolduan. A flustered Bolduan pressed further, remarking that Borio’s former position at the NSC was now vacant:

Do you think the administration, the White House, would be better served, though if they had someone – I don’t know – like a Dr. Luciana Borio in the position that you had held?

Dr. Borio again refused to attack the administration’s handling of the coronavirus, and Bolduan retreated.

Even some Democratic legislators appeared uncomfortable when hosts pressed them for a negative sound bite about the President. During the 10:00 am EST hour of CNN Newsroom, House Minority Whip Debbie Dingell (D-MI) actually chided host Poppy Harlow for attempting to inject politics into the issue:

POPPY HARLOW: Given Vice President Pence’s history as Governor dealing with the recent public health crisis in terms of HIV in Indiana, is he the best-equipped to lead this effort at the White House?

REP. DEBBIE DINGELL: You know what? I don’t think this is a time to take shots... Taking cheap shots at people right now is not the thing to do.

CNN’s morning shows also ran a report by in which senior political analyst John Avlon bashed the Trump administration as “anti-science” – ironically, while a chyron that read “Pandemics Don’t Care About Partisan Politics” occupied the bottom of the screen.

It’s bad enough when Democrats and Republicans politicize national emergencies, but for the self-ordained Facts First Network to do the same is nothing short of outrageous. This isn’t what journalists are supposed to do during a national health crisis. How bad must the epidemic get for CNN to stop taking what even Democrats network have called “cheap shots?”