STUDY: Cable News Is a Playground for Congressional Democrats 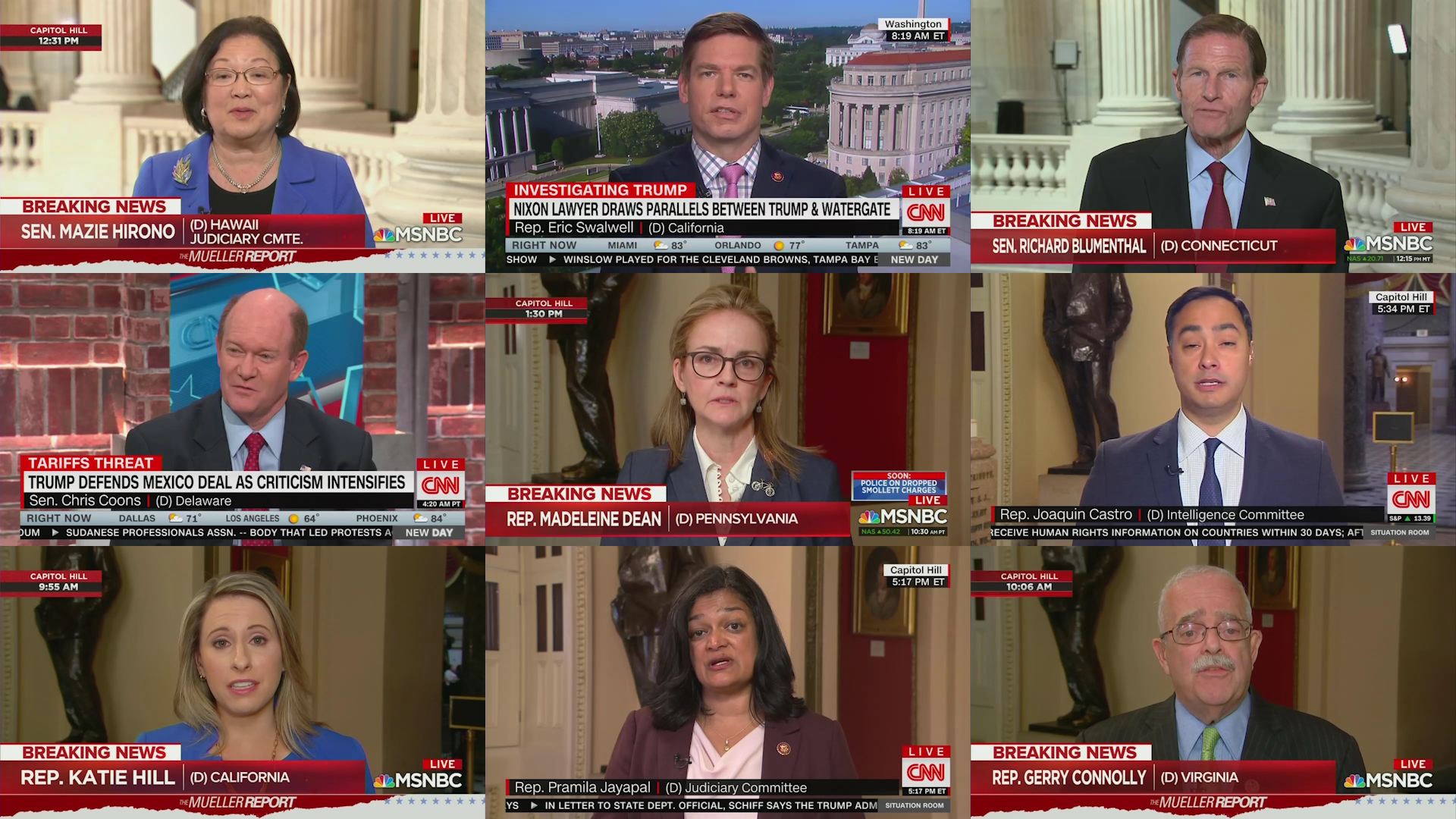 Congress may be almost evenly divided these days, but not on the liberal cable news networks. A new study by the Media Research Center finds that CNN and MSNBC host Democratic Representatives and Senators seven times more frequently than their Republican counterparts, and most often use Democratic talking points to question members of both parties.

MRC analysts examined every broadcast from 6am ET to midnight ET on CNN and MSNBC during three randomly-selected weeks when Congress was in session (January 7-11, March 25-29 and June 10-14), amounting to 540 hours of programming. Each network conducted virtually the same number of interviews with sitting members of Congress: 159 on MSNBC, vs. 165 on CNN.

Our analysts found an overwhelming partisan bias on MSNBC, where congressional Democrats were interviewed 13 times more often than their GOP counterparts during these sample weeks (148 Democrats vs. just 11 Republicans). On CNN, the ratio was a still wildly-imbalanced four to one (136 vs. 29).

Note: Interviews with Vermont Senator Bernie Sanders and Maine Senator Angus King, both independents who caucus with the Democrats, were included in the Democrats’ total. 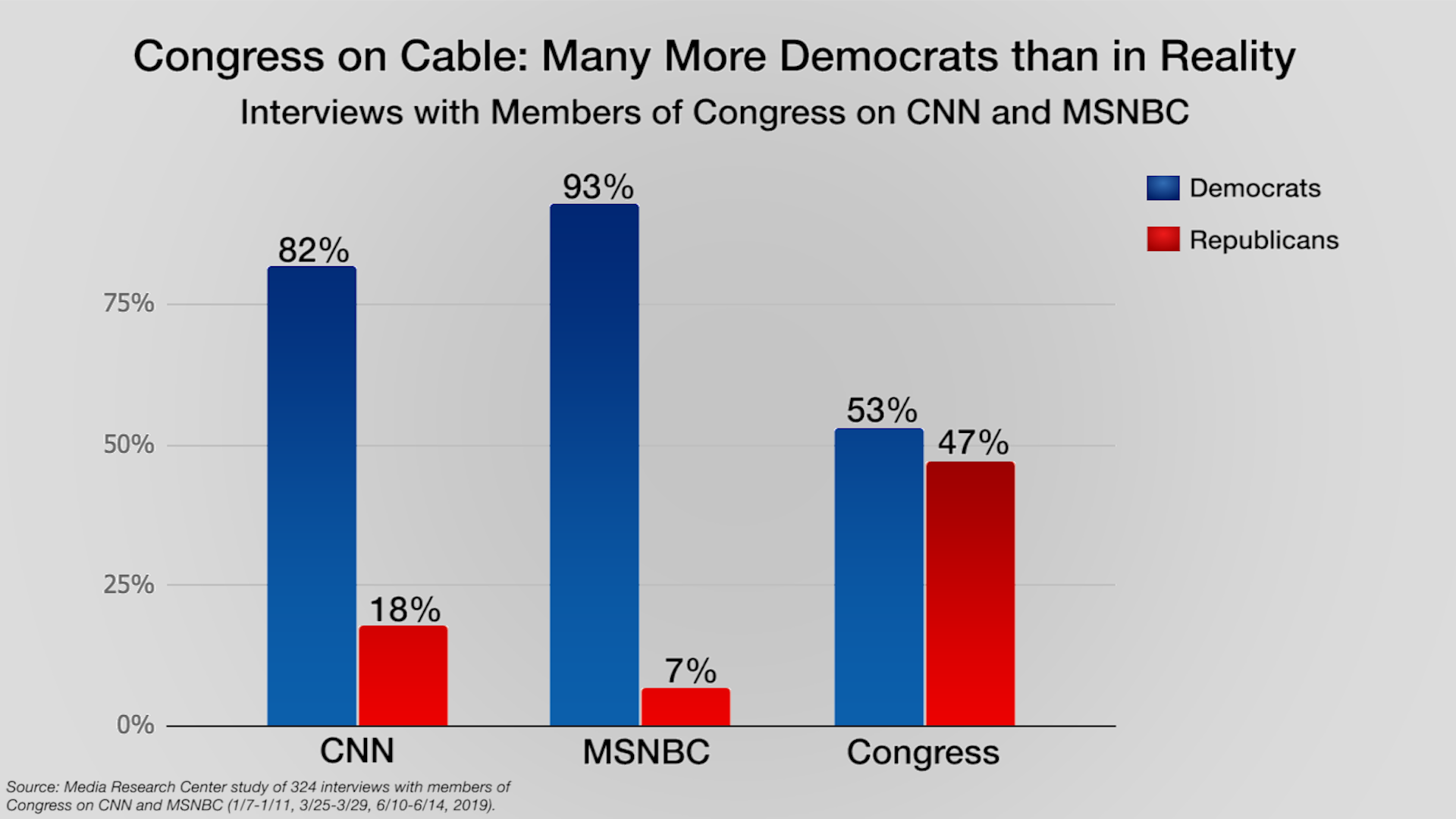 Despite the current Republican majority in the Senate, Democrats accounted for 90 (87%) out of a total of 103 interviews with Senators, while Republican Senators received just 10 (10%). The split was virtually identical among members of the House: 199 (87%) were Democrats, while the remaining 30 (13%) were Republicans.

The presidential race was not the reason for the skewed results, since the congressional Democrats running for the 2020 nomination comprised only a small slice of the interviewees — just 10 of the total 134 Democrats interviewed on CNN (7%), and 19 out of 148 (13%) on MSNBC.

This huge disparity would mean less if the networks conducted equally tough interviews with each side, but that’s not what our team found. When Republicans were interviewed, they routinely faced adversarial questions that reflected a Democratic agenda, yet Democratic guests were rarely confronted with Republican talking points.

For this study, an agenda question was defined one which challenged the interviewee with a recognizable talking point from the opposing party. These could involve arguments on various policy issues, political confrontations such as the partial government shutdown, or the various investigations of the President. (See examples below.)

Republican guests faced a total of 310 questions, just over half of which (156, or 50%) could be classified as reflecting the agenda of one party or the other. Of those, 152 (97%) reflected an adversarial/Democratic agenda, compared to a mere four (2.5%) based on a friendlier, Republican agenda.

For Democrats, the terrain was far more hospitable. Of 660 questions identified as having a partisan tilt (out of 1,653 total questions), 535 (81%) were based on a friendly Democratic agenda, while the remaining 125 (19%) asked the Democrats to respond to an adversarial/Republican agenda. 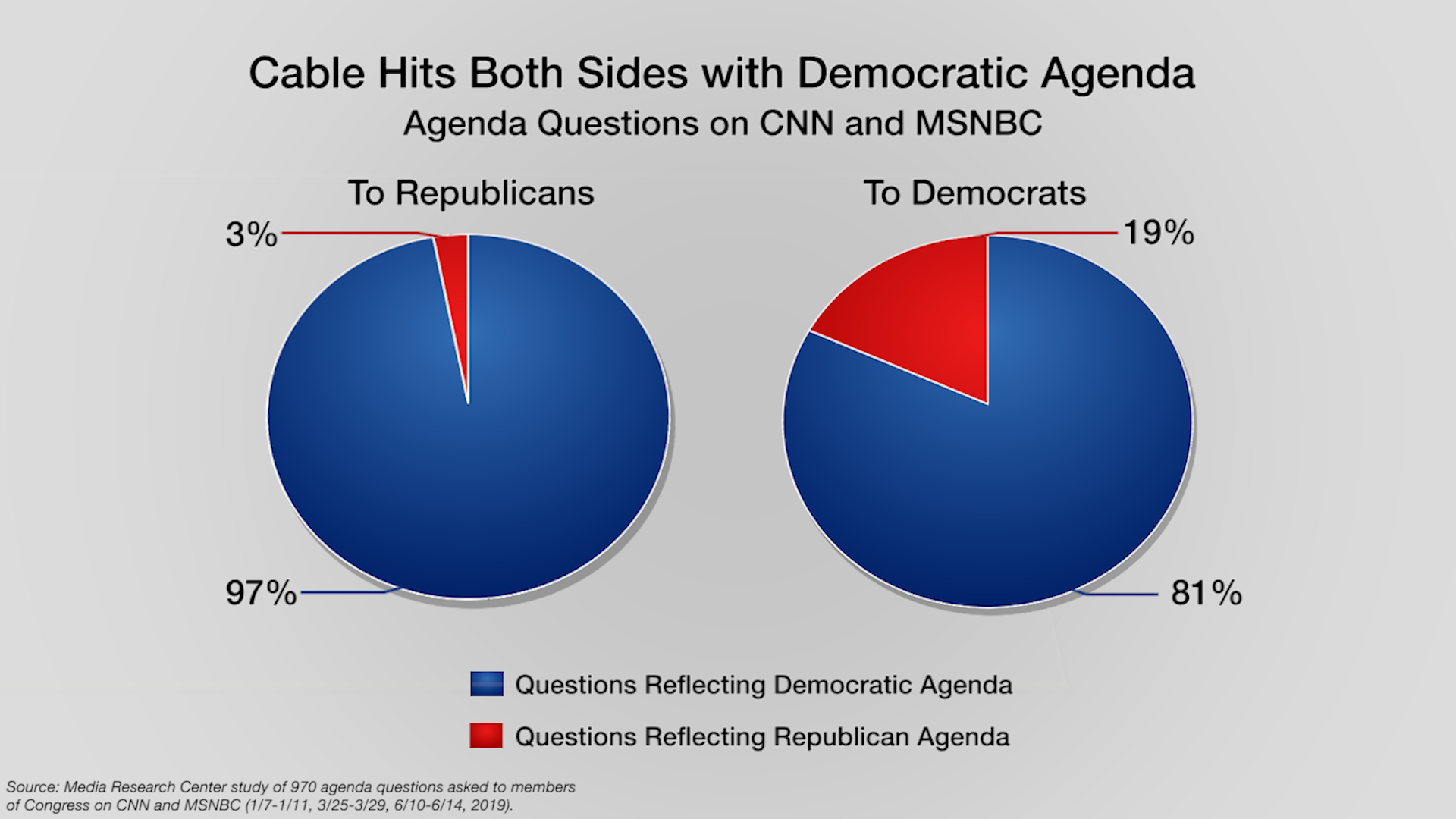 There’s nothing wrong in asking a political guest to respond to the arguments of the other side.  But repeatedly asking Republicans to answer to Democratic talking points, while rarely asking Democrats to do the same thing, suggests cable networks are actually choosing sides, rather than merely playing Devil’s advocate with guests.

Below are a series of questions from the study that exemplify the different kinds of agenda questions posed by cable hosts and anchors:

The President has largely dismissed concerns about federal workers not receiving their paychecks. He insists he could also relate to their situation. Do you believe President Trump understands the financial hardships these Americans and their families are about to go through?
— CNN’s Wolf Blitzer to Congressman Brian Fitzpatrick (R-PA) on The Situation Room, January 7.

As a Republican on the Judiciary Committee who does not want impeachment, but is looking at a report from the Special Counsel that says there are 10 potential instances here of obstruction of justice involving the President of the United States — if you don’t want impeachment and you are on the Judiciary Committee, what do you do?
— MSNBC’s Steve Kornacki to Congressman Kelly Armstrong (R-ND) on MTP Daily, June 10.

If this President declares a national emergency and grabs 4 or 5 billion dollars from the defense budget and throws it for the wall, is that an article of impeachment? Is that a high crime?
— MSNBC’s Chris Matthews to Congressman Eric Swalwell (D-CA) on Hardball, January 9.

I think that so many people would say, “Well, what’s wrong with adding a citizenship question to the census? Don’t we want to know how many people are here in the country?” But then you have tried to talk about the back story to who concocted this plan, and how this plan came to be, and that it may not be quite what it appears to be. So, quickly, can you remind people of how this is linked to the architect of gerrymandering?
— CNN’s Alisyn Camerota to Congressman Raja Krishnamoorthi (D-IL) on New Day, June 13.

But Congresswoman, not all of those [illegal immigrants] are people we’re going to let in. Just because they’re fleeing violence doesn’t mean that our borders are open. We have to have secure borders.
— MSNBC’s Stephanie Ruhle to Congresswoman Veronica Escobar (D-TX) on MSNBC Live, January 10.

You said earlier today that, quote, “There is evidence of collusion, no question.” Do you stand by that claim? Because it sure seems like Robert Mueller’s conclusion is very different.
— CNN’s Anderson Cooper to Senator Richard Blumenthal (D-CT) on Anderson Cooper 360, March 25.

The rules don’t work, right? You can — you can come in illegally, you could come in illegally and when you catch me, I can say, “I want asylum,” and I jump the line, effectively. You guys have to change that rule.
— CNN’s Chris Cuomo to Congressman Chip Roy (R-TX) on Cuomo Prime Time, March 29.

When Mitch McConnell was asked last night about all of this [the Mueller investigation], he says he gets picked at every day about every aspect about this, but the point is that Democrats are trying to keep the 2016 election alive. Do you agree with McConnell on this, that that’s what this is?
— CNN’s Kate Bolduan to Congressman Adam Kinzinger (R-IL) on At This Hour, June 14.