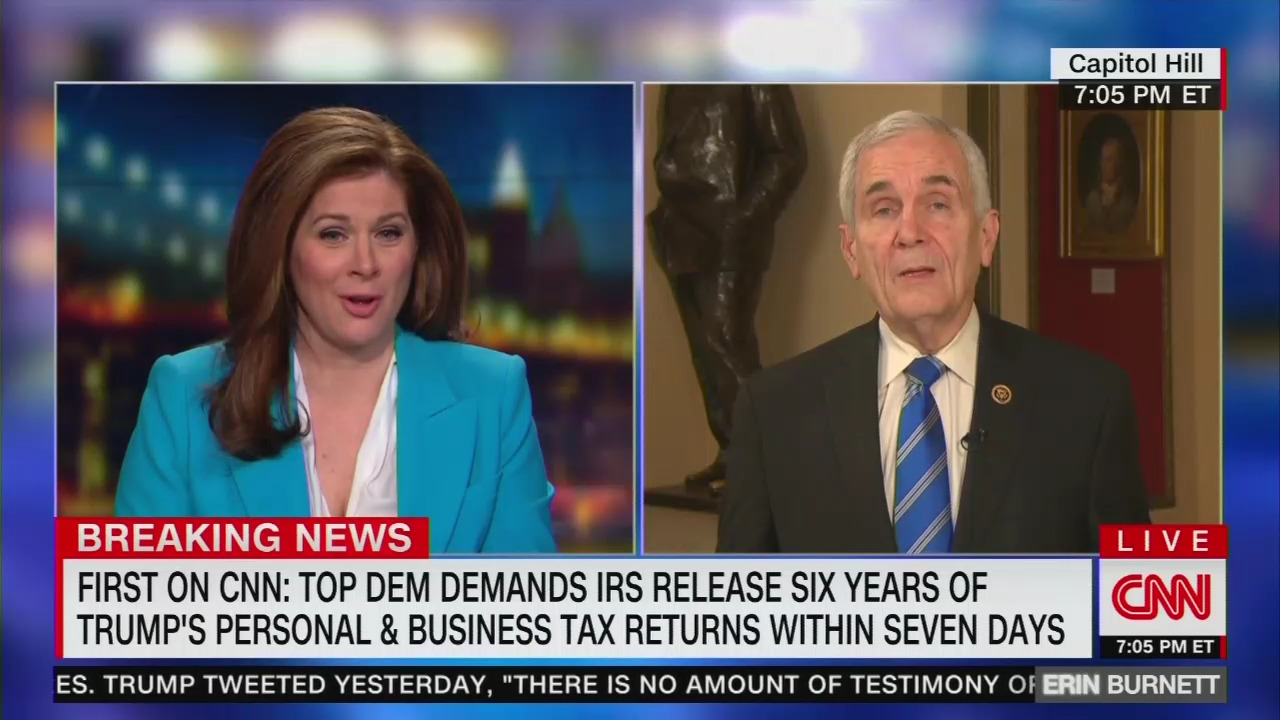 If House Democrats are sinking to a new low by using their subpoena power to rummage through the President's personal tax returns, you wouldn't know it by the way they have been treated on CNN over the past few days. Hosts on the liberal cable network have routinely lobbed softballs at Democratic interviewees, while challenges to the legitimacy of their quest see the President’s taxes were few and far between.

MRC analysts examined every interview that CNN hosts conducted with House members since the Ways and Means Committee requested President Trump’s tax returns on April 3, through April 8. They found 21 such conversations in which Members were asked about the Committee’s filing (19 Democrats, two Republicans).

Of the 76 questions asked to Democrats in those interviews, only 15 (less than 20 percent) made Democrats respond to criticism that the Committee might be overreaching in its quest for these documents. Meanwhile, of six relevant questions that hosts asked Republicans, all but one assumed the legitimacy of the Democrats’ request and challenged the Congressmen to explain the President’s reticence.

Impatient hosts even challenged Democrats to go further in their approach. For example on April 3, hours after the request was first filed, Erin Burnett pushed Rep. Lloyd Doggett (D-TX): “Are you worried you didn’t ask for enough?”

Two days later during the 9:00 a.m. Eastern hour of CNN Newsroom, co-host and former Obama-era official Jim Sciutto asked Rep. Brendan Boyle (D-PA) whether Republicans were secretly admitting that Democrats were in the right: “Do any of your Republican colleagues privately say, yes, you know what, this is a norm of our system, and by the way, we understand this is what the law says? Do they tell you that, or are they enabling the President?”

On those few occasions hosts pressed Democrats about whether they were overreaching, they almost always framed the criticism in the lens of partisan attacks from the Republican side (“We’re hearing from Trump’s lawyers...”, “Some of your Republican colleagues have argued...”).

While CNN's questions amounted to softballs pitched to anti-Trump Democrats, they played hardball with Republicans like Rep. James Comer (R-KY). During the 9:00 a.m. Eastern hour of Newsroom on April 4, CNN's Poppy Harlow hit him with the same script she was using on Democrats:

One, isn’t [Trump] breaking his promises, the ones he made repeatedly on the campaign trail? And two, it is part of the IRS code that the Ways and Means Committee which is now chaired by Democrat Neal, Representative Neal, does have the right to make this request. Yes, they have to go through the Treasury, so Mnuchin would have to turn them over, but it is part of the IRS code, sir.

On its own, there is nothing particularly eyebrow-raising about a press outlet posing tough questions to Republican lawmakers. Rather, it is the juxtaposition of the kind of questions hosts asked to each side – heavily adversarial for Republicans, but predominantly friendly for Democrats – that exposes CNN’s blatantly partisan handling of this story.

Thanks to Rich Noyes for his help with this study.