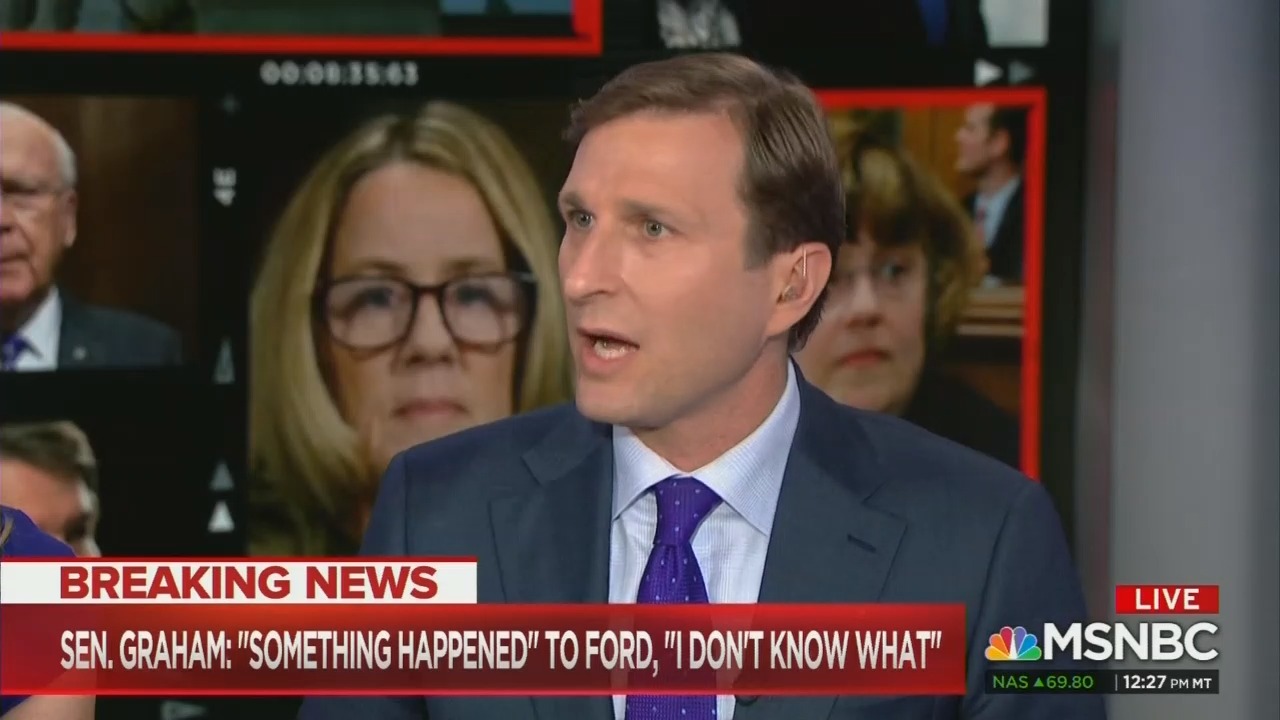 During a 2:00 p.m. ET MSNBC Live panel discussion of Christine Blasey Ford’s testimony in front of the Senate Judiciary Committee, host Brian Williams appeared disquieted by Senator Lindsey Graham’s characterization of Ford as “a nice lady.” He threw the ball to Goldman for his reaction, and Goldman was more than happy to oblige.

“I need to apologize for all men for what you just heard,” he pronounced grandiosely. “It is shameful the way that [Graham] disdainfully dismisses what she emotionally and emphatically just said.”

Goldman was responding to a brief interview which had occurred just moments earlier during a committee recess. In his remarks, Graham characterized Ford as “a victim” of the Democratic Party, “competent,” “accomplished,” and “a nice lady who has come forward to tell a hard story.” He added that he believed “something happened” to her.

However, in Graham’s refusal to determine that Kavanaugh was guilty after having heard Ford’s testimony, Goldman saw a ripe opportunity to grandstand. He continued:

And as a man, as I sat there listening to Dr. Ford, I was moved. That was incredibly powerful. You don't have to be a woman. You don't have to be a prosecutor. You can just be a human being to feel her struggle and her difficulty. And for Lindsey Graham to get up there and belittle her right after it and try to make this into a political gamesmanship is disrespectful and a disservice to the process.

It is unclear which of Graham’s remarks Goldman considered “belittling.”

Co-panelist and MSNBC contributor Cynthia Alksne, a former federal prosecutor, then asserted that Ford’s accusation was itself a serious piece of evidence against Kavanaugh: “Not to mention, [Graham] knows better. If a woman goes into a courtroom and says that man attacked me, that's enough. That’s evidence. When the woman says it, it’s evidence.”

“It’s not a he-said-she-said,” she continued emphatically, “according to the law, it’s a corroborated statement.”

Ford has identified four individuals whom she claims were at the party where the alleged sexual assault took place – all of whom have stated under oath that they have no memory of such a party.

For a transcript of Graham's interview and Goldman's reaction, click "expand" below:

SENATOR LINDSEY GRAHAM:  I'm really upset that they knew about this in August and never told anybody. I'm really upset if Dianne Feinstein believed this was a credible allegation that she wouldn’t do Judge Kavanaugh the service of saying, “I've got this, what's your side of the story?” Turning it over to the committee so we could have something not this close to the midterms. When they say that she wasn't sure we werewilling to go out there, that's a bunch of bull. I don't know what they told miss Ford, but we were willing to go to California. We were told she couldn't fly.

All I can say is that we’re 40-something days away from the election and their goal, not miss Ford's goal, is to lay this past the midterms so they can win the Senate and never allow Trump to fill the seat. I believe that now more than ever. I don't know who paid for her polygraph, but somebody did. And here is what I'm more convinced of. The friends on the other side set it up to be just the way it is.

I feel ambushed as the majority. We're going to hear from Mr. Kavanaugh – Judge Kavanaugh, and I've been a judge, a prosecutor and a defense attorney. And here is what I'll tell you. When it comes to where it happened, I still don't know. I don't know when it happened. She said she's 100% certain it did happen. I bet you judge Kavanaugh will say, “I'm 100% sure I didn't do it.” The people named say they don't know what Miss Ford’s talking about. She can't tell us how she got home and how she got there. And that's the facts I'm left with: a nice lady who has come forward to tell a hard story that's uncorroborated.

And this is enough? God help anybody else that gets nominated. Based on what I heard today, you could not get a search warrant or arrest warrant because you don't know the location, you don’t know the time, and you don't have any corroboration.

As to miss Mitchell, that's what I hoped she would do. I heard a bunch of speeches from a bunch of politicians who have politicized this from day one, who’ve been lying in wait for a political purpose. Not miss Ford, but certainly them, making a bunch of speeches. And Miss Mitchell went through the facts of what happened to that day, leading up to that day, and how we find ourselves here. So from my point of view I’m pleased with what I saw.

REPORTER: Senator, given what you laid out about your own background as a prosecutor, as a defense attorney, as a judge, do you, sitting up there, find Dr. Ford to be credible?

So here’s what you do. When you have emotional accusation and emotional denial, you use the rule of law, the presumption of innocence attaches to the person accused. You have to give them notice of times and location. You ask, “Is there anybody to verify this?” and when you give names, they all go the other way.

Having said that, what do I think about miss Ford? Very competent, accomplished lady. Something happened, I don't know what. But you're asking me to say it was Brett Kavanaugh, and I don't know when it happened, where it happened, and he said it didn't happen. But I will say this. I thought it was a good suggestion for her to go talk to somebody to work through this.

REPORTER: How is that not all an argument for a more fullsome investigation?

GRAHAM:  If you really believed we needed an investigation of this, why didn't you tell us in August?

GRAHAM: So here’s where they go on Mr. Judge. He says, “I didn’t do it, I don’t know what she’s talking about.” They want to bring him, trash him out, and call 25 people who’ll then say that he's an abuser. And guess what? We’ll be past the midterm. I’m not gonna reward people for playing a political game, I think, with her life. She is just as much a victim of this as I think Brett Kavanaugh. Because somebody betrayed her trust. And we know who she gave the letter to. And the people that betrayed her trust, they owe her an apology.

BRIAN WILLIAMS: And when calls her a nice lady...

DANIEL GOLDMAN: I need to apologize for all men for what you just heard. It is shameful the way that he disdainfully dismisses what she so emotionally about emphatically just said. To claim you need a location or you need a date to remember a traumatic experience is completely fallacious, and it should never, ever, ever be uttered by anyone. I don't know how this will play out politically but Lindsey Graham is trying to set this up as a court of law by talking about presumption of innocence and these search warrant. That's not what we're doing here. That's not what the purpose of this is here.

And as a man, as I sat there listening to Dr. Ford, I was moved. That was incredibly powerful. You don't have to be a woman. You don't have to be a prosecutor. You can just be a human being to feel her struggle and her difficulty. And for Lindsey Graham to get up there and belittle her right after it and try to make this into a political gamesmanship is disrespectful and a disservice to the process.

CYNTHIA ALKSNE: Not to mention he knows better. If a woman goes into a courtroom and says that man attacked me, that's enough. That’s evidence. When the woman says it, it’s evidence. Moreover, when it turns out she's been telling people for ten years or eight years or whatever the number is, each of those prior consistent statements is also evidence. This whole bananas about it's a he said, she said is wrong. It's not a he said, she said. It is –  according to the law, it's a corroborated statement. And if a jury believed her, they would convict him. And Lindsey Graham knows better because he's tried a lot of cases.