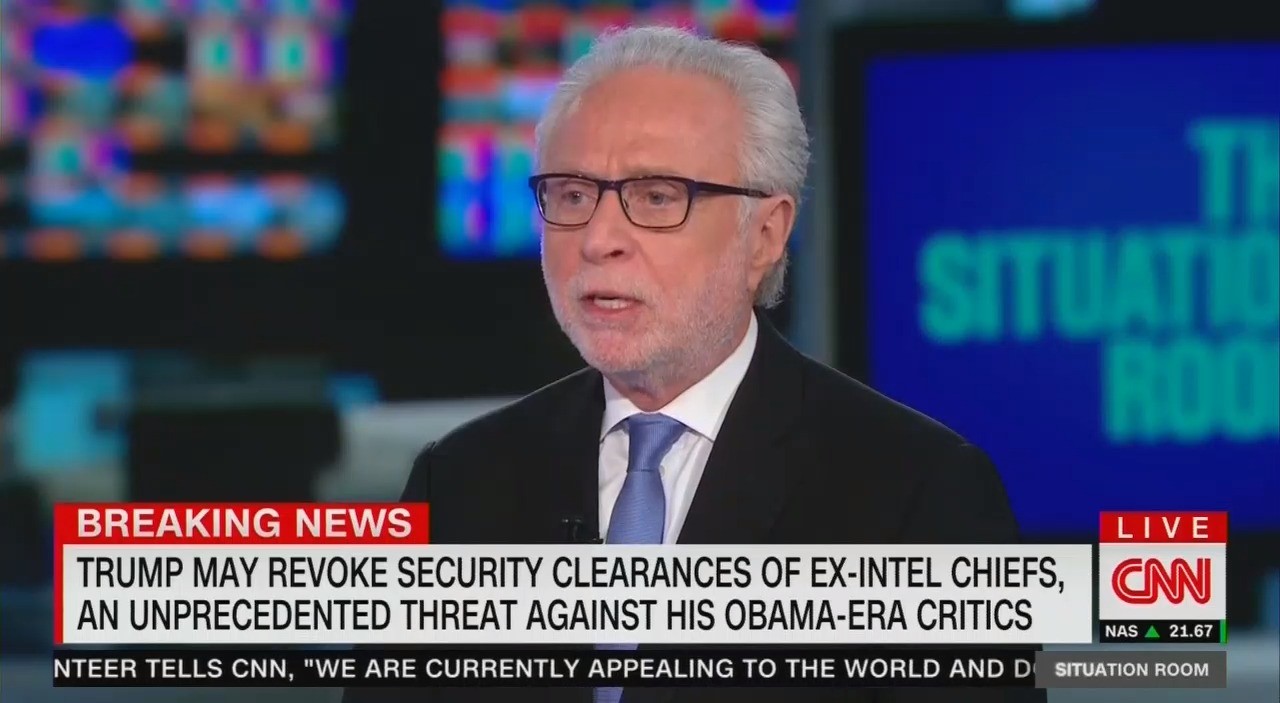 The media are in a tizzy over the recent revelation that President Trump might revoke security clearances from former intelligence officials with a penchant for going on television. During a concern-filled installment of CNN’s The Situation Room on Monday, host Wolf Blitzer anxiously posited that revoking the clearance of CNN national security analyst James Clapper would constitute a “potential national security threat.”

Blitzer was quick to get Clapper on the phone after it was revealed that his security clearance might be in danger.

During the interview, which took place in the 5:00 p.m. Eastern hour of the show, Blitzer frequently reiterated how much time Clapper had spent in the military. “How personally irritated are you right now that someone with your background in the military – 30 or 40 years, whatever it was – is being treated like this?” he asked obsequiously.

A discussion of the story in a later segment quickly devolved into a spitballing session in which panelists took turns floating potential arguments against such a move by the Trump administration. Blitzer kicked off the conversation by asking panelists, “Why is this threat so troubling?”

The general consensus was that the President was abusing his executive authority to silence some of his harshest detractors. “These are people who are critics of the President,” pointed out CNN chief political analyst Gloria Borger. She then added, “Some of them served for Obama, so that’s another strike against them.”

CNN legal analyst Anne Milgram warned of a “slippery slope” whereby current officials could be stripped of their clearance for criticizing the President. “Do you evaluate people who currently have security clearances in the law enforcement agencies on their political beliefs, on their political party?” she pondered.

Washington Post assistant editor David Swerdlick scoffed at White House Press Secretary Sarah Huckabee Sanders’s claim that the likes of Brennan and Clapper had “politicized the process” by taking jobs at MSNBC and CNN, respectively. “Actually, this is politicizing the process,” he snarked. Swerdlick then implied that revoking a former official’s security clearance somehow constituted a breach of the First Amendment: “They’re citizens; remember that. They have the right to free speech like everybody else.”

Blitzer responded with a deductive leap of impressive proportions: “If you remove security clearances from a James Clapper, for example...” – just for example – “that’s a potential national security threat.”

The analytical minds on the panel came up with a great many reasons for why revoking James Clapper’s security clearance would be a very poor decision. But none seemed interested in pointing out that if Clapper – a CNN analyst – were denied access to sensitive information, it might affect his ability to provide colleagues with insider knowledge.

Transcripts for both segmets are below. Click expand to read:

WOLF BLITZER: First of all, what do you think that the fact that you're being targeted along with some of your former colleagues by the white house?

BLITZER: What's to stop the President from revoking security clearances for anyone that criticizes him? I take it he has the right to do so.

CLAPPER: Well, he does and that's a key question. If now when someone applies for security clearance are they going to add to the standard form 86 a pledge of allegiance to President Trump? Unswerving, complete loyalty to the President. As a new criteria for a clearance? That's a pretty chilling thing.

BLITZER: Have you ever seen anything like this before? Is this unprecedented?

CLAPPER: Absolutely not.  I’ve never seen anything like it. I was amazed. I was watching the White House press conference today. And that's the first I'd heard of it. And, yeah. I was taken aback to say the least.

CLAPPER: Absolutely not. And I think the arch recent example is Mike Flynn, his criticism of Hillary Clinton. And the Obama administration. And it never crossed my mind to even raise the issue about revoking his security clearance.

BLITZER: Why would someone who no longer works in the government like you right now, you're retired, need a security clearance in the first place?

CLAPPER: It's more to take advantage of the experience and corporate memory of people, particularly those that spent a long time in the business. And I've had occasion to consult over the last year and a half with Trump administration officials who will remain nameless so I can protect them, to take advantage of the history and the background that I have. And the same is true of the others on our – on the bad boy list.

BLITZER: Well, I know for a fact that current officials in the Trump administration whether Mike Pompeo as CIA director spoke with his predecessors. Dan Coats is director of national intelligence, I assume he's consulted with you on several occasions over the past year and a half. I wonder if you could confirm that.

CLAPPER: I'm not going to go into who I have or haven't consulted again, to protect the confidentiality of those conversations and, frankly, to protect them.

BLITZER: Because it's very, very common for current officials to speak with their predecessors, to get some sense if they're having a sensitive meeting, for example, with a foreign intelligence official, they may want to call in a predecessor, maybe of a different party, maybe somebody who has a different experience just to get a sense of what it was like. That's why I've been told you still need some security clearances.

CLAPPER: Well, yes. And I did that in the positions, senior positions I occupied. As Director of Defense Intelligence Agency, Director of Naional Geospatial Intelligence Agency, and certainly as DNI, I called upon formers, mainly to get smart on history of certain issues and things that I was – I had under consideration at time. So, it is a useful resource to draw on.

BLITZER: Certainly is. What do you think? Will this have a chilling affect on former government officials to express their own political opinions once they leave office?

CLAPPER: Well, I think it does. It's a very sad and disturbing thing for the first amendment.

BLITZER: And one quick question. Tell us, General Clapper, how many years did you serve in the active U.S. Military, and how personally irritated are you right now that someone with your background in the military, 30, 40 years, whatever it was, is being treated like this?

CLAPPER: Well, obviously, I think it's pretty shabby. And I'm not – and that’s just not me. I served 34 years in the military altogether, counting my Marine Corps reserve time, and then 32 years in the Air Force. And then another 16 years in 3 different civilian capacities in the government. Two of which were political appointee positions in both Republican and Democratic administrations. And I think it's – this is terrible. You know? The substantive importance of it for me is minimal. I don't get classified briefings anymore. None of us do. And per my cadence tweet earlier today, has no impact on what I say or do. It could for some people, particularly if they are under
employment with a defense contractor where a security clearance is required. Well, it could have real impact. In my particular case it doesn't.

BLITZER: General Clapper, thanks so much for joining us and thanks for all of your service to our country. We're appreciative.

CLAPPER: Thanks, Wolf. Thanks for having me.

WOLF BLITZER: It’s clear the President has the authority, he can remove someone’s security clearances if he wants. But why is this threat so troubling?

GLORIA BORGER:  Look, these are people who are critics of the president. They're also public servants who have been public servants for decades in many cases. Who have served under Democrats and served under Republicans. President doesn't like them, because they have been critical. Some of them were served for Obama, so that's another -- that's another strike against them. It also makes the president's case not only about the Obama administration being out to get him, but also about, you know, the deep state that exists -- that he believes exists in government. And so, you know, I think he throws this out there. It's a way to change the subject a little bit. This morning we were talking about are we going to war with Iran? We were talking about Putin and the Helsinki summit. And now suddenly we're shifting to Brennan and Clapper. So I think it's the way the president wants to stir the pot. And I think it's really troubling.

BLITZER: Yeah. A lot of people agree with you. Anne Milgram, you're our legal analyst. Some of those mentioned by the White House today are potential witnesses in the overall Russia probe. What does that tell you about this?

BLITZER: You remember, David, earlier this year when there was an issue of security clearances for Jared Kushner, rob porter, others in the white house. The white house made a point of saying, we don't get involved in that. That's held in the intelligence community, the law enforcement community. They have other procedures with dealing with national security and security clearances.

DAVID SWERDLICK: That's right, Wolf. And on that scale, the white house is being completely inconsistent. They want to have an arms' length distance when it comes to Jared Kushner and be directly involved or propose being directly involved here. The bigger point is, yes, you had the press secretary there in that clip you played saying that these individuals may have politicized the process. Actually, this is politicizing the process. And I think that one thing that you really have to look at here is that not only were these people public servants, they're citizens; remember that. They have the right to free speech, like everybody else.

BLITZER: It's also interesting, Jackie Kucinich, that a lot of times a current Director of National Intelligence, a current CIA Director, current National Security Adviser, will want to bring in predecessors to get a sense of, for example, how a foreign intelligence over was working in terms of some background information. If you remove security clearances from a James Clapper, for example, spent 32 years a an intelligence official, worked his way up to a our-star general in the military, you say, “You know what, we’re not going to bother talking to that person any more,” – that's a potential national security threat.