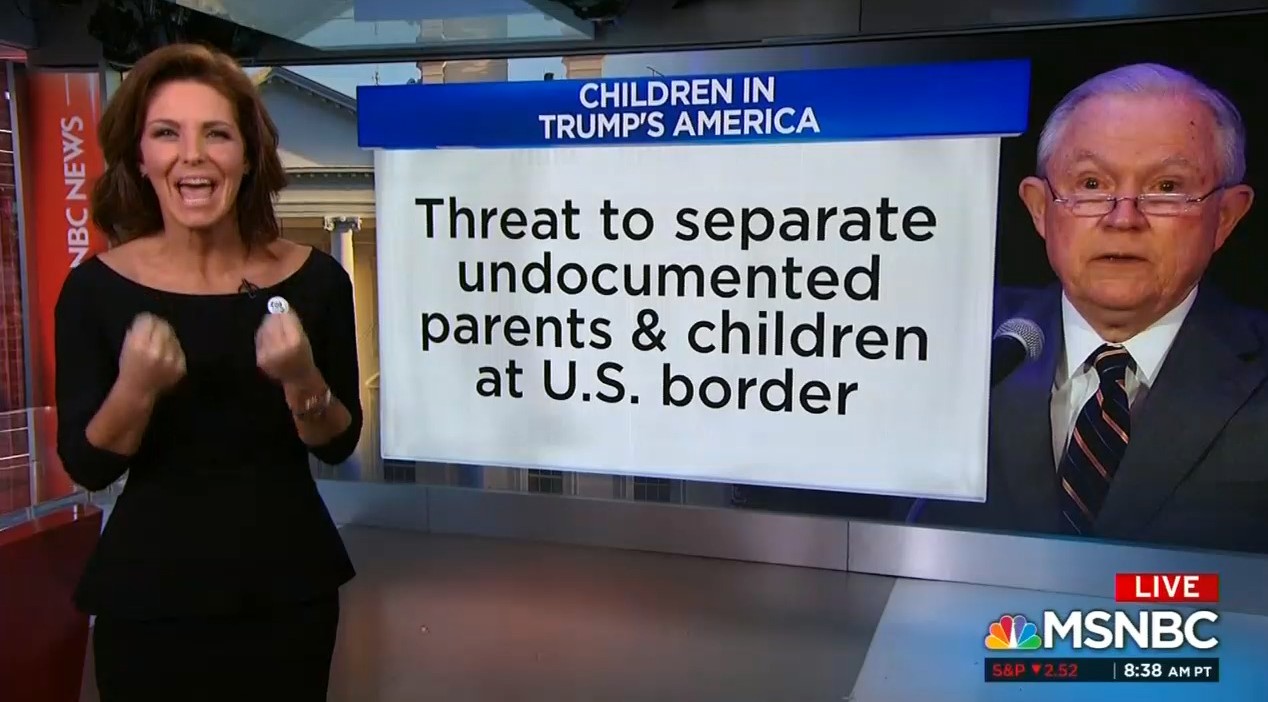 The aim of Ruhle’s presentation was to frame the President as a hypocrite for supposedly endangering the same kids whom his wife had pledged to help: “The First Lady’s plans to help children, they don’t gel with her husband’s policies. Policies that impact every child in this country.” However, a number of her claims amounted to nothing more than patisan talking points.

The show ran a clip of Attorney General Jeff Sessions warning that parents who attempted to sneak into the U.S. with their kids “might be separated” from them “as required by law.” Ruhle then spun this policy as “ripping babies from their mothers who have risked everything in search of a better life,” which is a characterization jam-packed with the kind of emotionally manipulative verbiage one might expect to find in an open borders pamphlet.

“How exactly is that being best,” she demanded. Recall that Ruhle’s thesis was that the President’s policies were impacting “every child in this country” [emphasis mine].

After decrying recent cuts to CHIP and the administration’s support for the school voucher program, Ruhle closed with an impressive display of mental gymnastics. “The administration appears to be attacking teen pregnancy prevention programs,” she worried. “It tried but was blocked from cutting grants to Planned Parenthood.”

Supporters of Planned Parenthood have rolled out a litany of creative arguments over the years in attempting to justify the organization’s continued federal funding. But Ruhle’s claim here – that an organization which largely exists to perform abortions is somehow “helping children” – may have topped them all. Presumably by “children,” she was referring to pregnant teenagers. Otherwise, she would have been attempting to argue that an end to taxpayer funding for abortions would somehow harm unborn babies.

“So again, I ask the question: How is this ‘Be Best,’ as in best for children?” she concluded triumphantly.

At this point, there are likely some readers who would like to ask Ruhle that same question.

To read a transcript of the segment, click "expand" below:

STEPHANIE RUHLE: The first lady's plans to help children, they don't gel with her husband's policies. Policies that impact every child in this country. Less than about an hour after her announcement, Attorney General Jeff Sessions announced a new zero tolerance crackdown on families who enter the United States illegally. He is threatening to separate parents from their children at the border.

JEFF SESSIONS: If you are smuggling a child, then we will prosecute you. And that child may be separated from you as required by law.

RUHLE: If you're smuggling a child, chances are we're talking about an infant. A baby. Ripping babies from their mothers who have risked everything in search of a better life. How exactly is that being best?

Also President Trump wants to slash previously approved health insurance funding for kids as a way to help appease conservatives who are angry over his as in his – as in his, President Trump's – spending package. He'll reportedly send a plan to congress today stripping $7 billion from CHIP, the Children's Health Insurance Program, which helps cover low income kids’ health care. The White House says the cut comes from money already expired in the program, and money set aside for higher-than-expected enrollment.

President Trump's budget for next year slashes education funding by more than $3 billion while adding $1.5 billion for private school vouchers and school choice programs. About 90% of the nation's children use the public school system. Lots of kids live in areas where they don’t have another school to choose from. Also, Trump's budget eliminates several school programs, including after-school and grants that help support and recruit good teachers. That is a “Best” idea indeed.

Then there's this: When it comes to some of the nation's most vulnerable kids, the administration is delaying a rule that would require states to report foster care youth who have been victims of sex trafficking. Advocates say they fear it will push foster children into more risky situations.

And, finally the administration appears to be attacking teen pregnancy prevention programs. It tried but was blocked from cutting grants to planned parenthood. Last year it ended grants it gave to government to run local programs. The administration is now pushing abstinence-only. and is shifting money towards those plans. Researchers say such programs are ineffective and unethical. So again, I ask how the question, how is this “Be best,” as in best for children?