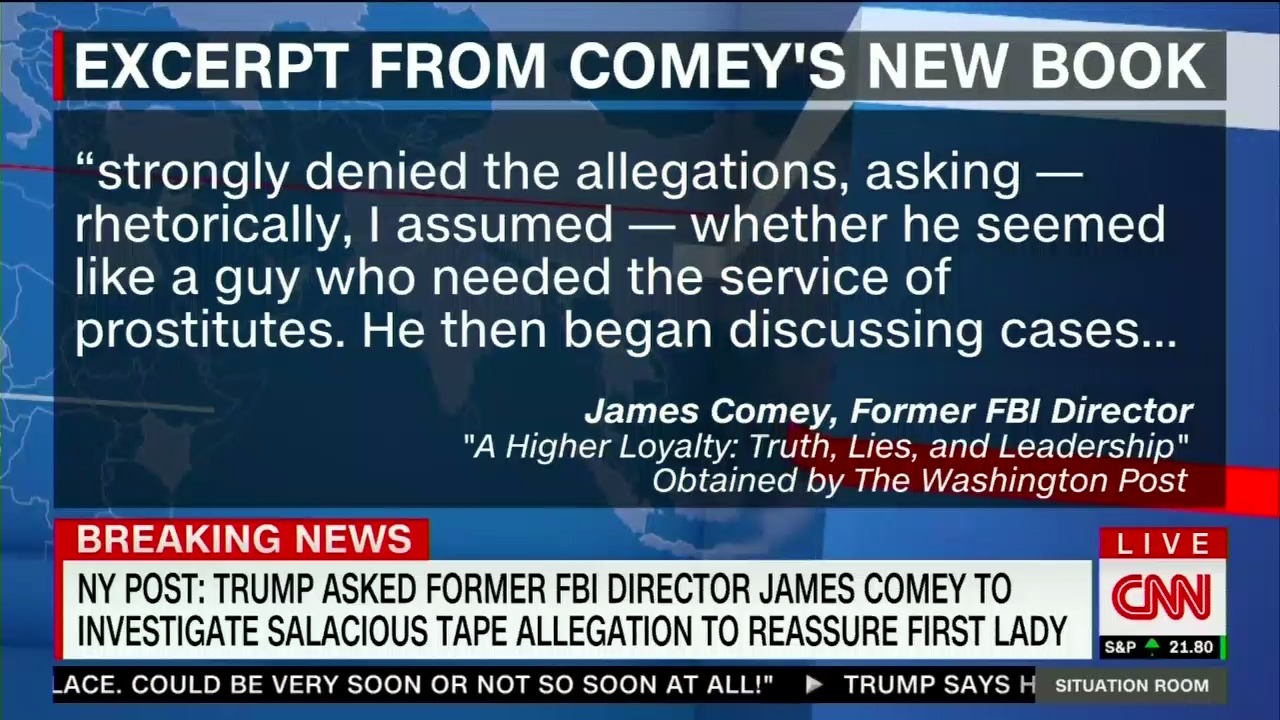 As James Comey’s new book exploded onto the scene, CNN pumped the breaks on its “Facts First” campaign to revisit perhaps the most salacious claim contained in the Steele dossier. The dossier alleged that Donald Trump had paid ladies of the night to micturate upon one another in Moscow, and that the Russian government had taped the horrific escapade. To date, no part of these allegations has been substantiated.

Intrepid NewsBusters analysts examined transcripts of all CNN broadcasts that aired between April 12 and April 16, finding 77 separate mentions of the absurd claim. The cable network feverishly replayed a clip of Comey repeating the allegation to ABC’s George Stephanopoulos, which constituted 28 of those instances. April 13 featured a particularly steady stream of mentions: 48 in one day, for an average of one every 30 minutes.

For the purpose of this study, a mention was defined as any allusion to the most graphic aspect of the rumor. Thus a clip in which James Comey merely mentioned Russian prostitutes would not have factored into the study. Rather, analysts looked only for phrases such as “prostitutes urinating on each other,” “the pee tape,” and, of course, “golden showers.”

This constituted the MRC’s second study in 2018 to cover CNN’s bizarre obsession with toilet language. In January, NewsBusters found that the network’s denizens had used the phrase “s***hole” (uncensored) 195 times in one day. At the very least, newscasters on that day had been discussing a corroborated claim about the President.

Admittedly, Comey’s book release and subsequent ABC interview do partially explain the resurgence of this rumor on CNN’s airwaves. But even then, the number of mentions was inordinately high considering this year-old claim still has not been verified.

The self-described “Facts First” organization has demonstrated a troubling penchant for reporting scandalous rumors and sexual innuendo. Such obsessive coverage is a particularly bad look for a network that once published an op-ed calling for a ban on the term “fake news.”