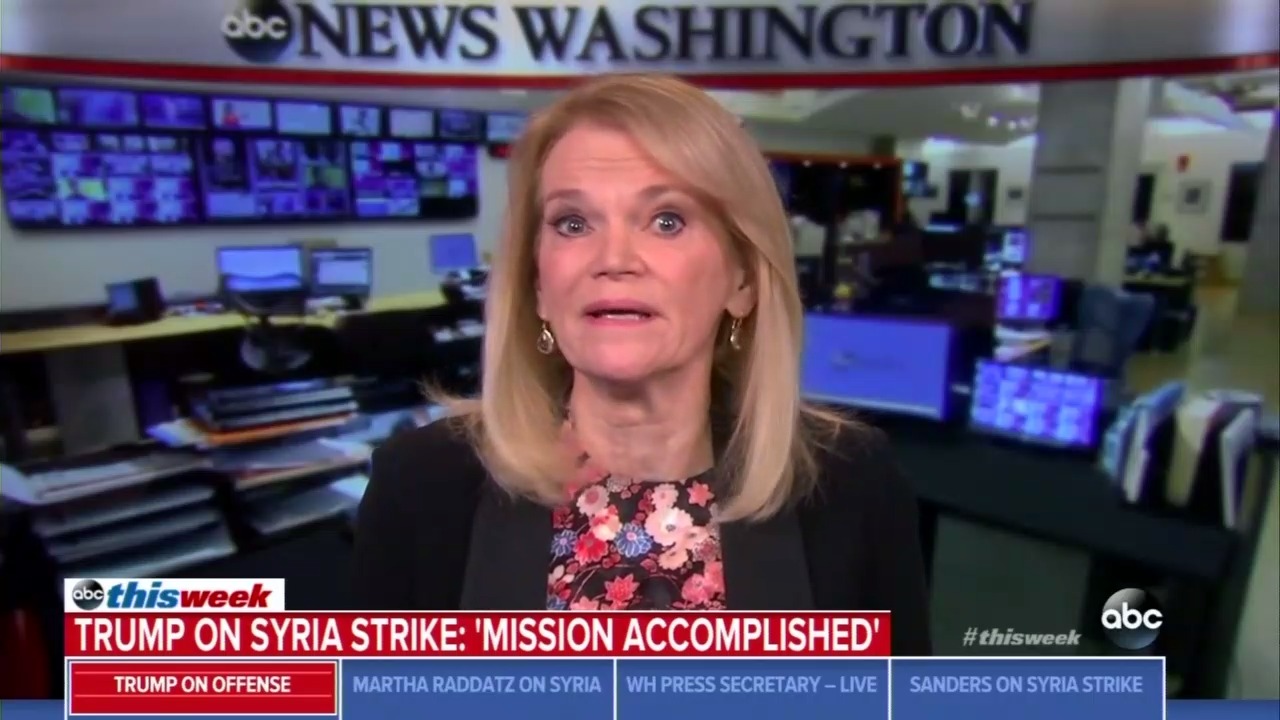 On Sunday morning, television news personalities begrudgingly showed a small degree of satisfaction with President Trump’s recent military action in Syria. Evidently disturbed by their support for anything Trump, cable and network media hosts collectively lifted the goalposts in unison and hurriedly ran them downfield.

In a bid for something — anything — to take issue with in regards to the recent military strike in Syria, network hosts frantically coalesced around a common shelling point: the President’s Twitter account. Specifically, the point of contention was a tweet in which the President used the phrase, “Mission accomplished,” which as many talking heads helpfully pointed out, was the same ill-advised terminology President Bush had used to declare the Iraq war a success prematurely.

It's not wise the to use the term mission accomplished in an ongoing conflict. If what you wanted was a limited, punishing strike, as safe for U.S and allied forces as you can possibly make it, with no unintended casualties on the ground and no escalation in the conflict, then the mission was accomplished.

In other words, if the Trump administration had intended to accomplish exactly what these airstrikes had achieved, then sure, maybe the mission was technically “accomplished.” But, Raddatz shrewdly observed, the alleged destruction of Assad’s chemical weapons caches would not “change the dynamics of the war on the ground.”

This Week host George Stephanopoulos neatly tied a bow on the cognitive dissonance inherent in Raddatz’s analysis: “Martha Raddatz said perhaps the initial mission was accomplished, but that the overall declaration of ‘mission accomplished’ is premature.”

On CBS's Face The Nation, Margaret Brennan pushed a similar talking point. “President Trump says the strike was perfectly executed and that the mission was accomplished, but some in Congress say the strikes didn’t go far enough,” she nitpicked. Brennan failed to mention that the members of Congress to whom she was referring were predominantly Democrats. But that was probably just an oversight. She continued, “Either way, the question remains — what exactly is the strategy in Syria and the conflict that’s now in its seventh year?”

Meet The Press host and NBC News political director Chuck Todd took the same angle, demanding to know what precisely the administration’s strategy in Syria would be. “I know they believe the tactical mission was a success, but do we know what the strategy is on Syria going forward?” he huffed. New York Times News Magazine chief national correspondent Mark Liebovich reiterated Todd’s assessment: “Mission accomplished is a short-term declaration, and when you tweet about it, this is not a substitute forefather a message or a strategy.”

Though the tweet was the specific headline issue that hosts were criticizing, their talking points in panel discussions about Syria bore a curious resemblance to criticism of the strike voiced by Democrats in Congress. The main thrust of their arguments appeared to be that while they believed the airstrikes were a success, there would not be satisfied until a precise plan of action going forward was released.

On CNN, the demands went a step further, with Inside Politics host John King appearing unlikely to be satisfied until Assad was either deposed or dead and the civil war in Syria was over:

But the question is where are we today and what next? The Syrian Presidency tweeting out a picture of Bashar al-Assad walking to work, going to an office building, essentially trying to say nothing changed. The conversation among a lot of people, even Trump administration supporters, is that Assad has factored this in: “If once a year I have to take a rein of cruise missiles, but I get to stay in power, so be it.”

Moving the goalposts in a political discussion is not often regarded as an impressive strategy. But the sheer coordination with which Sunday’s cable and network news hosts managed to achieve this feat of across-the-board narrative shifting was enough to impress even the most blackhearted of cynics.