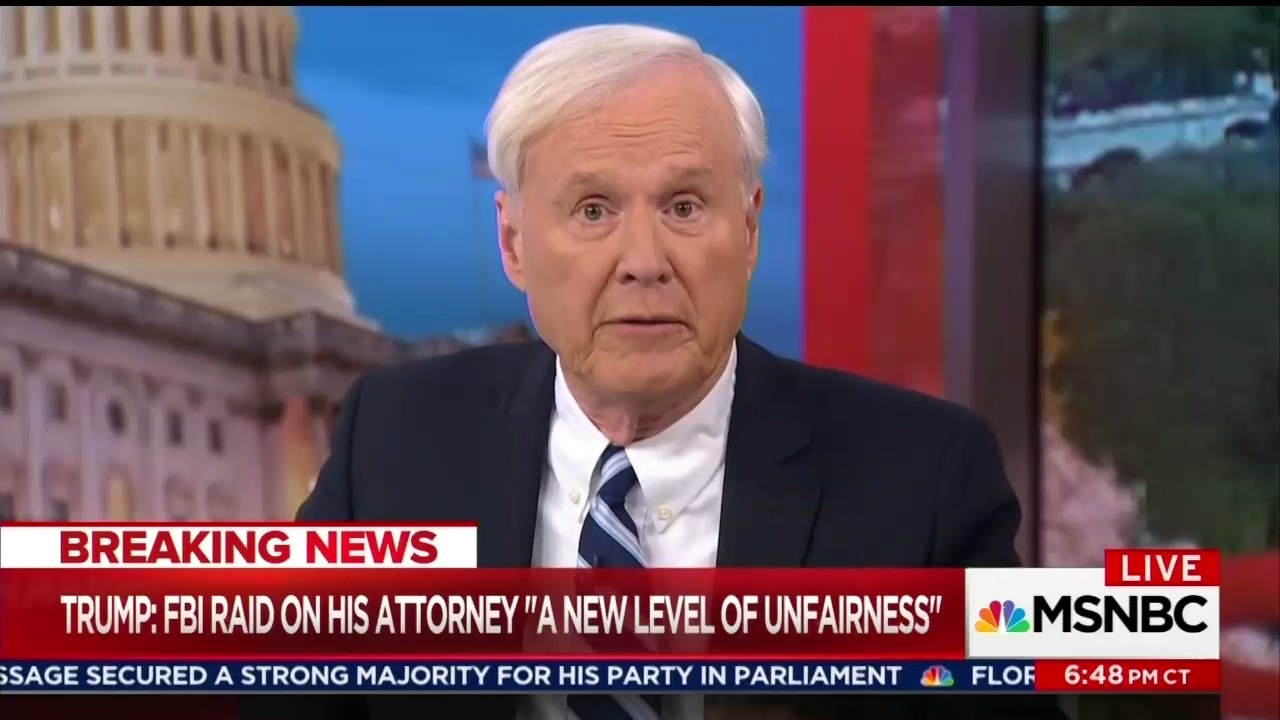 Following the revelation on Monday that the FBI had raided the office of Donald Trump’s lawyer, the recent developments in Syria took a back seat on MSNBC’s evening shows. However, Hardball host Chris Matthews found a creative way to tie the stories together: by predicting the President would bomb Syria to distract from the Mueller probe.

Matthews made multiple references to Wag The Dog, which he described as a film wherein the President “decides to start a little war to cover up for hanky-panky.” He mentioned the movie to both panels he hosted that night, asking his guests for their take on whether such a scenario was likely to play out in real life.

Ostensible Republican Strategist Charlie Sykes was lukewarm to the prospect. He alluded to the possibility of such a development when he opined that Trump tended to “come up with distractions” during particularly scandalous news cycles, but he backed down when pressed about specifics.

“Wag the Dog? Do we bomb Syria now, Charlie?” Matthews inquired.  Sykes would not answer the question directly but cryptically repeated that the President might be in need of a “big” distraction. “Look,” he conceded, “I think we were probably going to bomb Syria anyway,”

Former radio host Ron Reagan was more confident: “Would any of us put it past President Trump to decide that a nice little military adventure in Syria might be a nice distraction from this?”

Matthews later revisited this narrative with USA Today journalist Susan Page, who, like Sykes, was reluctant to fully commit to an affirmative answer. “I think that’s a very serious charge to make against a President,” she fretted. The MSNBC host shot back, “It’s a question to raise when you have John Bolton sitting next to him.” Washington Post opinion columnist Jonathan Capehart agreed: “Right. And for this particular President.”

Later in the same segment, Matthews reminded panelists of accusations that President Reagan had “started that action down in Grenada to cover up for Beirut,” and the marines who had died there. “It isn’t so far-fetched, is it?” he needled. Page remained steadfast, while Capehart once again concurred full-bore:

I think with this President, if you can imagine it, it can possibly happen. Things that we used to think were ridiculous and could never happen, have happened.

Those keeping score at home may recall that Matthews made a very similar argument nearly a year ago to the day. On April 6, 2017, he and Mother Jones wingnut David Corn reacted to the President’s airstrike on Syria with precisely the same analysis: that it had all been a big distraction from the Russia probe. Corn even brought up Wag The Dog during that panel discussion.

See below for a partial transcript:

7:29 – 7:30
CHARLIE SYKES: I'm always reluctant to get inside Donald Trump's head because that's kind of a scary place for me. But you're absolutely right. This is a President who will at least vent, at least consider punching back. But as David says, there is no easy way out for him. But what Donald Trump has figured out is number one, you change the subject. You come up with distractions and you count on your base and supine Republicans to provide you cover.

SYKES: Well, he woke up this morning thinking I may need a bigger distraction, you know. Look, I think we're probably going to bomb Syria anyway.

MATTHEWS: Ron, I saw the scary face of John Bolton behind the President. And then I saw him in the next scene sitting next to him today. What kind of advice do you get from Bolton? Attack!

RON REAGAN: Exactly. Would any of us put it past President Trump to decide that a nice little military adventure in Syria might be a nice distraction from this?

7:47 – 7:49
MATTHEWS: How about Wag The Dog, Susan? I was with Barry Levinson last week. I’ve been reminded, he’s the director of that film, where a President, in fiction, decides to start a little war to cover up for hanky-panky.

SUSAN PAGE: Right. And, you know, I think that’s a very serious charge to make against a President. But I do think it’s hard for –

MATTHEWS: It’s a question to raise when you have John Bolton sitting next to him.

JONATHAN CAPEHART: Right. And for this particular president.

PAGE: You also have a situation where the President is embattled on all fronts, which you could see. To turn the sound off and watch the President in that very peculiar conversation. And he looked like  he did when he did the fire and fury thing with North Korea where he is crossing his arms. He looks very defensive. He looks embattled. It's with that mind-set that he goes into the meeting on Syria.

MATTHEWS: Okay, even on Reagan, and Jonathan, I remember Reagan was, a lot of people thought he started that action down in Grenada to cover up for Beirut and the loss of the marine lives. It isn't so far-fetched, is it?

CAPEHART: I think with this President, if you can imagine it, it can possibly happen. Things that we used to think were ridiculous and could never happen, have happened.

MATHEWS: On a lower level, he does know how to play diversionary tactics. He know house to distract.