On Wednesday, March 14, it was reported that former Acting FBI Director Andrew McCabe had made misleading statements during a formal interview with Inspector General Michael Horowitz. The FBI disciplinary office since recommended firing McCabe. MSNBC has given this story paltry air time compared to the massive amount of attention that General Michael Flynn received for similar accusations, and the few hosts who have bothered to discuss McCabe's alleged misdeed have vocally decried his potential termination.

NewsBusters analyzed MSNBC’s coverage of the first eight hours that followed after both the Flynn and McCabe stories broke. Within these designated periods, the network spent a total of 379 minutes (78.9 percent of the full eight hours) discussing Flynn’s alleged transgression, but only 21 minutes (4.3 percent) on McCabe’s, amounting to roughly 18 times more coverage of Flynn. Additionally, the 16 hours immediately following the range analyzed for McCabe included only another 20 minutes on the topic. This means that the total percentage of time dedicated to McCabe within the first 24 hours amounted to 2.8 percent of the full day. 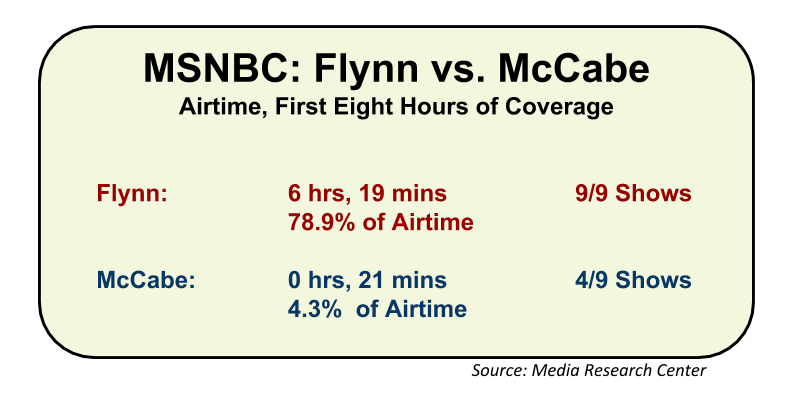 Because Flynn’s hearing for lying to Special Counsel Robert Mueller was first reported on MSNBC at 9:15 a.m. on December 1, 2017, the analysis included all footage from then until 5:15 p.m. on the same day. Every show that aired during that time span spent more than half of its apportioned hour on Flynn, including commercials. For four shows, Flynn coverage constituted over 45 minutes of the full hour, and MSNBC Live With Hallie Jackson spent a full 60 minutes discussing the story with no commercial breaks.

For the McCabe story, the analysis included all footage ranging from when Craig Melvin first broke the story at 1:47 p.m. on March 14, 2018, until 9:47 p.m. that evening. Only four shows mentioned McCabe, all of which did so within self-contained segments. Nicolle Wallace of Deadline: White House provided the most coverage, which amounted to just under nine minutes (15 percent).

George Washington Law professor Jonathan Turley noted that although it is illegal to mislead a Federal Investigator, McCabe is unlikely to face criminal charges. Historically, the FBI has declined to charge any fellow federal prosecutor accused of providing false or misleading statements during an investigation. Instead, McCabe only risks losing his pension if he is fired before March 19th.

Despite McCabe facing far lower stakes, every MSNBC host who mentioned him within 24 hours of the story breaking was disturbed by prospect of his firing. All In host Chris Hayes characterized the controversy as “another alarming turn in the President’s attack on the American Justice system.” Wallace referred to President Trump as a “bleep hole” for appearing to support McCabe’s termination, and Joe Scarborough of Morning Joe argued the following day that depriving the former Acting Director of his pension “would be outrageous.”

In December, none of the network’s hosts objected to the charges filed against General Flynn. MSNBC hosts and contributors unanimously supported his prosecution, despite investigators under then-Director James Comey having concluded previously that Flynn had not intentionally lied and thus should not be charged.