On Wednesday, CNN legal analyst Paul Callan came to the defense of those questioning the FBI’s and Department of Justice’s objectivity regarding the investigations of Hillary Clinton and Trump officials. In his appearance on CNN Newsroom, he explained:

You know I started writing this piece about the whole situation that was raised by Grassley. And originally, I was angered at the President's attacks on the FBI. I thought they were unjustified. But when I started to delve into the facts, boy, there's some really disturbing stuff here.

I mean, what Grassley is talking about is this agent, his name is Strzok, and he's a counterintelligence agent for the FBI. He's exchanging text messages with his girlfriend, Lisa Page, which just trashed the President. They called him an idiot, and you know that language we've put up on screen was the mildest of it. But essentially, the two of them, the lawyer and the agent agreed that the president is a threat or would be a threat to the country if elected.

Now, he's in a central role in the Hillary e-mail investigation. And as a matter of fact, Strzok was the person who went to James Comey, just before Comey had that famous press conference, where he kind of let Hillary off the hook and said the investigation is going to be dropped into criminal charges. Strzok was the guy who changed the language, which originally was that she was grossly negligent in her handling of classified material. And he softened it to say, extremely careless, which is not criminal. This is the same guy who the inspector general now has exchanging these e-mails, you know, showing that he has a personal bias against the president. So that's what Senator Grassley wants a close look at. And I think it's legitimate to look at the bias of the investigators.

When Poppy Harlow brought up Rep. Francis Rooney’s (R-FL) comments about “purging” these corrupted elements of the leadership in the Department of Justice and FBI, Callan stated the following:

Well, I think Rooney has a legitimate point about the leadership of the Department of Justice and the leadership of the FBI. We're not talking about field agents, but we're talking about leadership positions. And I'll give you another example that has come up, Deputy Director Andrew McCabe. A huge controversy about his involvement in these Trump investigations, because his wife was taking almost 700,000 dollars in contributions from friendly Democratic sources, friends of Hillary Clinton, while he was in the chain of command also of the Hillary investigation and later, the Trump investigation. So, it just looks like, from an appearance standpoint, that there's bias at the top levels of the FBI.

HARLOW: You're seeing the Mueller team. You're separating the two here?

CALLAN: Well, I think they all kind of merge together, ultimately, because if we talk about the McCabe situation, he's the deputy director of the FBI, or at least was the deputy director of the FBI. And he -- his wife was running for a Senate seat in Virginia and she took $700,000 in contributions from Terry McAuliffe and passed control by him to support her in that campaign. And he then is in the chain of command of the Hillary e-mail investigation. 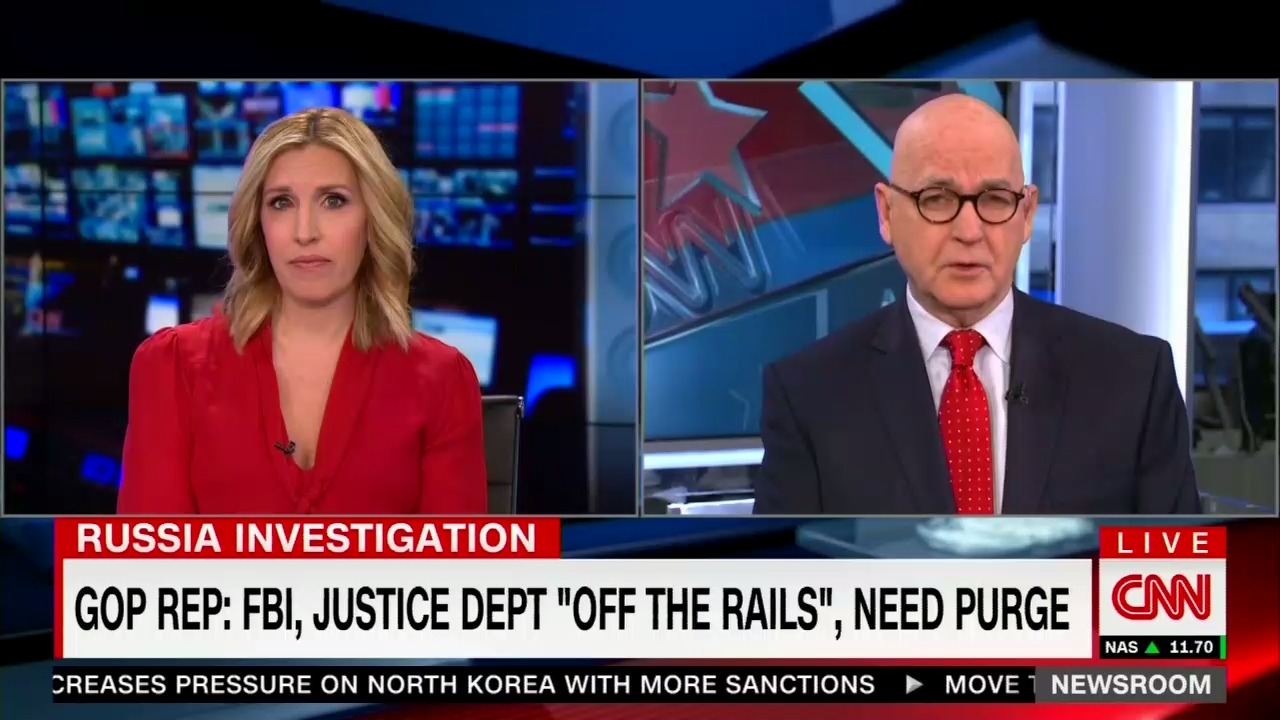 Now, that would be like if the FBI, let's say they were investigating a bank and, do you think they'd let an agent investigate a bank if his wife was taking a $700,000 loan from the bank? No! They'd pull the agent from that investigation.

HARLOW: Let me ask you. So you know the Deputy Attorney General Rod Rosenstein testified before Congress just a few weeks ago. He was asked and really hammered on questions over political bias within the agency. Here's one of his answers. He said, quote, "It's important to recognize that when we talk about political affiliation," he went on to say, "The issue of bias is something different." So, what he's saying is there can be a line there. These are humans who can have beliefs, et cetera. That does not translate into bias. Where is that line in your opinion? And is there anything that clearly, do you think clearly outlines that?

CALLAN: I think there's a clear line and it's a common sense line. If your wife is taking $700,000 from the Democrats, maybe you shouldn't be handling the investigation of who's going to be the next president of the United States. That's a clear line, in my view. There's even a federal law, the Hatch Act, by the way, while a federal employee can be registered and vote with a particular party, he can't be active with a particular party under the Hatch Act.

Now, that doesn't apply to his wife, but common sense would say, if a wife is taking a lot of money from a Democratic Party or a Republican Party, anybody who's under investigation, it may be best to put a different agent in the case. Now the FBI didn't do that. As a matter of fact, this is the person in charge of making these sensitive decisions, and he's -- he doesn't have the common sense to see that he's in a conflict situation, himself. So I think there's legitimate criticism of the FBI here. I'm talking about the leadership, not the field agents.

As Callan points out, there is a “common sense line.” The First Amendment does not protect the jobs of public servants. These are blatant conflicts of interest. Unfortunately, Callan’s changed tune is a lonely one as the rest of the mainstream media’s “legal analysts” continue to act as political commentators. Later that same day, CNN legal analyst Michael Zeldin refused to recognize even the possibility of political bias in the Mueller probe. Instead, he hysterically attacked Republicans:

Well, I think it's very scary what we're hearing from a couple of congressmen. We have this congressman using the word purge. And as Brianna indicated, that is a word that tends to be used in totalitarian governments. We have the congressman from the 1st District in Florida using the word coup d'etat in response to Mueller's probe here. These are very anti-democratic words that are being used by elected representatives of the United States Congress. So, for me, at a threshold level, this is unacceptable behavior. But when you get beyond that and you look at the substance, there really is no there there...