CNN New Day on Monday continued their coverage of how Donald Trump and the leaders he meets give handshakes with each other. Not only is this coverage bizarre, it's irresponsible. It simply is not important, especially since body language analyses are largely subjective with analysts often contradicting each other. New Day spent much of their Friday show consumed by the handshakes French President Emmanuel Macron and President Donald Trump shared.  Now, days after the handshake took place, they still thought it important enough to devote a segment to it. At one point, Camerota decided she was a body language expert herself in order to criticize Trump. She claimed Trump patronized Macron.

Take a look at the transcript:

ALISYN CAMEROTA: So, President Trump's handshakes with world leaders are unlike any we've seen before. But this one, this never- ending handshake with the French president takes the cake. What does the president's body language tell us about Mr. Trump? Let's bring in our body language experts. We have international etiquette expert Jacqueline Whitmore and body language expert Chris Ulrich. Great to see both of you.

CAMEROTA: John and I were flabbergasted as this handshake unfolded live on television because of all of the different maneuvers this complicated (INAUDIBLE) that they were doing. What did you see in this never-ending handshake?

ULRICH: Well, keep in mind, when President Trump meets a world leader, he's already taking up real estate in their brains. So for President --

CAMEROTA: What do you mean by that?

ULRICH: Well, literally, they have to almost prepare and be ready for him. They never know what's exactly going to come. And we see that with Macron. He steps into it and he starts to -- grabbing the president's hand and pulling it in, patting him on the back, both for dominance and support. It becomes this dance between the two of them. Literally President Trump, at about the 11-second mark, will knock Macron off his feet for a second, take him off balance by pulling him in.

CAMEROTA: OK, we need to see that. Hold on, let me see that. So somewhere here you think that he pulls him in?

CAMEROTA: Oh, we see it.

ULRICH: Just takes him off -- he literally takes him off balance for a second, Ashley (ph). So you've always got to be ready when you're dealing with the president.

JOHN BERMAN: You know, and, Jacqueline, Emmanuel Macron, what Chris is saying there is that leaders go in knowing they've got to deal with these handshakes. And in a sense, President Trump has already won there. But what do you think that Emmanuel Macron tries to do in this handshake? Because you could tell he was trying to assert some level of dominance there. 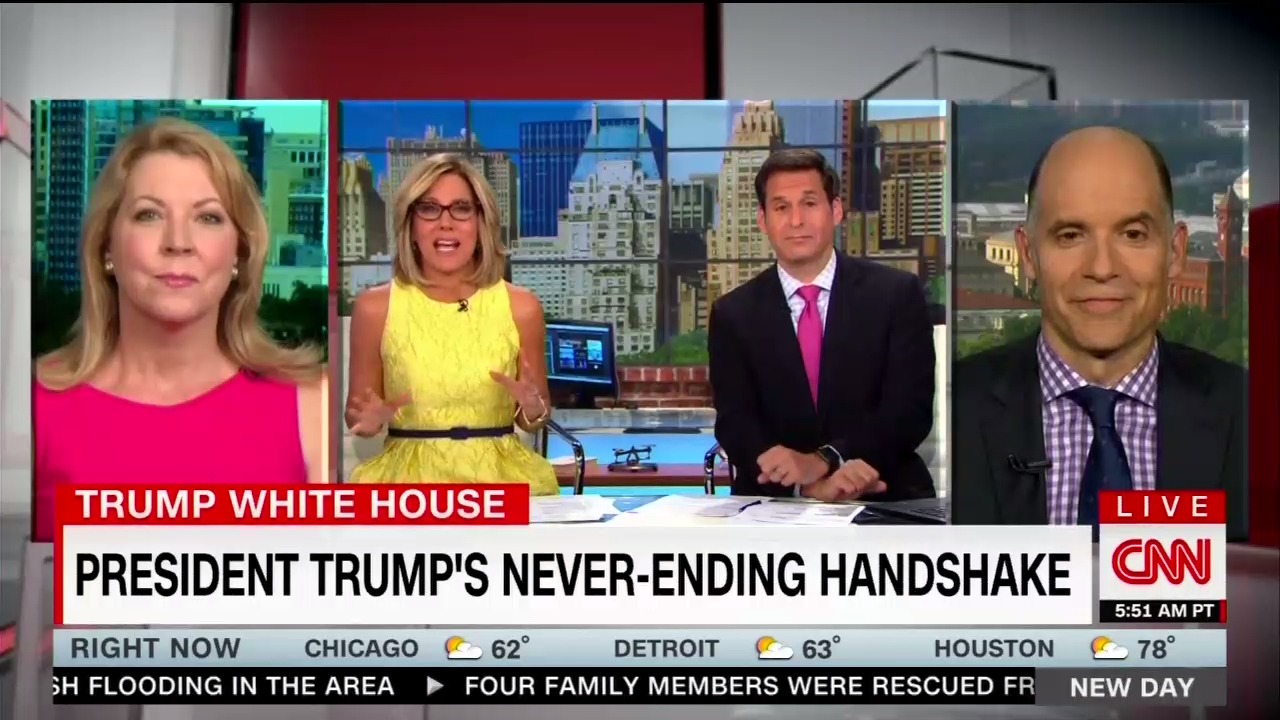 JACQUELINE WHITMORE: Absolutely. They're both in a power play. You can see that there are a lot of hands involved in this handshake. And there's something called the pat and pull, which is what you see. And Trump literally takes Macron off his feet, which is very authoritative. And then when you watch the video, Trump also puts his hands on Macron's wife's shoulders. And when you see someone put their hands on a person's shoulders that close to someone's face, it's a sign of intimacy. And you only do that with someone you know extremely well.

ULRICH: And keep in mind --

ULRICH: I was just going to add that handshake between the three of them with Brigitte and the president and Macron leaves Melania Trump on the outside. You know, they're all gripping hands and then finally they embrace here toward the end here. But to that awkward -- it kind of creates a perception of an awkward moment where the president, and the president's wife and Donald Trump are shaking hands but Melania is on the outside. It creates that visual perception that she's an outsider.

BERMAN: Can we have -- I want to ask one more thing we've seen repeatedly from President Trump here is that right there, the hand pat. When the president pats another leader's hand on top there, what's going on there, Jacqueline?

WHITMORE: When you pat someone's hand, that can show a little bit of affection. However, what psychologists call this is a status reminder. And it's a person letting the other person know that he or she is in control.

CAMEROTA: It is very patronizing, or can be.

ULRICH: Well, I think it's subconscious here. I don't think he's trying to dominate that in the moment but he's -- it just becomes awkward in that particular moment as he pushes in here. And you can see the three of them -- Melania's on the outside. It gives that perception that she's the outsider as they have this intimate moment of a building rapport that we're seeing happen between the two presidents and the first lady in that particular moment.

BERMAN: I kind of feel like the next time they might they're going to bring, you know, like Lou Ferigno or someone, you know, to join the circle here just to make clear who is in charge. This is now going to be a thing going forward. All right, guys, thank you so much. That was fascinating to see all that.

What would we do without CNN providing us with the news we need?