After Helen Thomas was unceremoniously booted from the White House press corps for making bigoted remarks about Jews, Henry, while working for CNN, publicly supported FNC's bid for Thomas' coveted front-row seat in the briefing room. 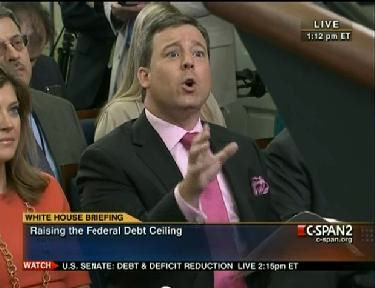 In the face of fierce opposition from the Left, Henry told the Wall Street Journal he was merely returning FNC's favor: "When CNN bid for the front row in 2007, Fox could have challenged it and had a knock-down, drag-out fight like the one we might have this time. But they did the gentlemanly thing and said CNN had more seniority. I've got to honor that commitment."

Just a couple of months later, while Henry was explaining on air how Fox News lost the bid for Thomas' seat but was awarded a different front-row seat (the one he now occupies), former CNN colleague Rick Sanchez suggested to Henry that Fox News shouldn't be awarded Thomas' old seat because it's not a legitimate news outlet: "I understand the Associated Press. I even understand Bloomberg. But don't you have to be a news organization to get that seat?"

Passing on the chance to criticize FNC, Henry offered a diplomatic response while Brooke Baldwin put her hands over her face: "Their White House reporters, regardless of what Rick may think about some of their other hosts...Major Garrett, Mike Emanuel, Wendell Goler are all solid reporters."

Henry, who sits on the White House Correspondents Association Board and votes on seating assignments in the briefing room, revealed that he was pressured to deny FNC's bid, as Sanchez cackled off camera: "There was a lot of pressure, pressure campaigns on the Internet, who were not happy and didn't understand why someone at CNN would be voting for Fox."

A transcript of Ed Henry's first exchange with Jay Carney as FNC's senior White House Correspondent, which occurred during Tuesday's press briefing, can be found below:

ED HENRY, FNC White House correspondent: Thanks, Jay. To follow on that.

JAY CARNEY, White House press secretary: Is this our first?

HENRY: Yeah, this is our first exchange from this seat.

CARNEY: Actually this is your good side.

HENRY: I knew you had a one liner.

CARNEY: My right, your left, it's very confusing.

HENRY: Your right, my left. I wanted to follow on Norah because if you basically have this Boehner plan that you say can't get through the Senate and you've got a Reid plan that the Republicans don't think can get through the Senate or the House and you're saying you want to compromise. What was the point of giving a prime-time address to the nation without an Obama plan and saying neither of these other plans can work?

CARNEY: I understand the idea that there isn't an Obama plan –

HENRY: But there isn't one, there's not one on paper.

CARNEY: – is point number one on the talking points issue by the Republican Party. I get it.

CARNEY: First of all, the president put forward, in detail, his principles at George Washington University.

HENRY: That's not a plan.

CARNEY: Quite a lot of detail. The president stood before you. I can't remember if you were here Friday night, some of you weren't because you cut out early. But a lot of you were.

(Boos from the press corp.)

CARNEY: And he put forward, in detail, with numbers, what he's willing to do. He then referred from the podium to the fact that White House officials would be briefing, in detail, what our plan is. Now the purpose of putting forward a plan on paper – our interest in this has to get a compromise, to get a deal. It has not been to politically position ourselves, say with things that appeal to our base, maybe pieces of legislation that we know can't pass but it would be greeted warmly by certain constituencies. Our goal, and the reason why the negotiations have been conducted the way they have been conducted, is because we want a result. That's the way the president has it. It is simply not the case, you know. Senior members of the House Republican leadership can open their desk drawer, pull out reams of paper that represent the president's proposals, and his counter-proposals, and his counter-counter-proposals, and his understanding that they need more of this, and that he would like more of that. There is plenty of detail.

HENRY:(Inaudible) He was giving a speech to the nation, and most Americans were not paying attention until last night. So even if he gave these numbers Friday night, people were not paying attention Friday night, by your own estimation. So why didn't he say last night: here are the nine things that I support, here are the numbers, here's what I want to do on taxes, and just lay it out? Say call your congressmen with this, not with this vague –

CARNEY: The point, I mean, the fact is you address the nation only so often on prime time. The president has been out here with an unbelievable amount of regularity, talking to you, talking to the American people throughout this process. He has put forward in great detail. I mean, you know, if you guys haven't talked about it on air, or put it in your newspapers or online, then you should because the detail is there. Secondly, he needed to talk to the American people last night for good reason because they have their own lives to worry about and they count on Washington, not always to take care of everything but to take care of the big things, like making sure we don't default on our obligations. And he needed to talk to the American people, to those Americans who haven't been paying close attention, to let them know where this stands and why it's so important, and why the risk is there that if Congress doesn't act – and we believe it will – something that has never happened before in our history before could happen and it would be very bad indeed.