The conventional wisdom in the liberal media is that the special election in NY-26 was a referendum on the Ryan budget, which the voters rejected by electing the Democratic candidate.

Despite the flaws in this talking point, which NewsBusters' Lachlan Markay explains here, Time magazine's Joe Klein took this argument to a whole new low.

Klein has since tried to walk back this declaration, but it wasn't the only bizarre claim he made on Lawrence O'Donnell's prime-time program. 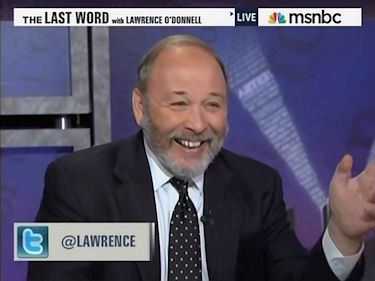 He can reassure his "Swampland" readers all he wants that his "tongue was planted firmly in cheek," but Klein has yet to retract his position that President Barack Obama is "right in the middle of the political spectrum, a mild liberal."

Perhaps Klein forgot the National Journal ranked Obama the most liberal senator in 2007.

Klein also skewered the Republican presidential field as a throng of "weirdos" who take "potshots" at the "more responsible politicians."

For his part, O'Donnell, a self-described socialist, was defenseless against Klein's half-joking socialist manifesto: "You have the floor, sir. Yes!"

JOE KLEIN, Time magazine: Can I point out, in all this talk about what happened last night in NY-26? That it was a victory for socialism!

LAWRENCE O'DONNELL: You have the floor, sir. Yes!

KLEIN: For the last two years, the Republicans have been lambasting Obama, who is right in the middle of the political spectrum, a mild liberal, as being a wild-eyed socialist. Well there ain't anything he's proposed as purely socialistic as our Medicare program, a single-payer program run by the government. And the folks love it.

O'DONNELL: And the conservative Republican voter in that district is saying "don't touch my Medicare." They know what they were doing. When you read those exit conversations where they're saying "I never voted for a Democrat before." They know exactly what they were choosing.

When you get a party making the kind of leap the Republicans have made over the last few years. A few years ago, Newt Gingrich, Tim Pawlenty, and all the others were in favor of cap-and-trade. When you have to go so far to the extreme, it opens the door for all kinds of weirdos to take potshots at the people who are the more responsible politicians.