On the March 17 edition of "Good Morning America," the former Bill Clinton campaign operative characterized Donald Trump's political maneuvering as an attempt to court the Tea Party by pandering to birthers. 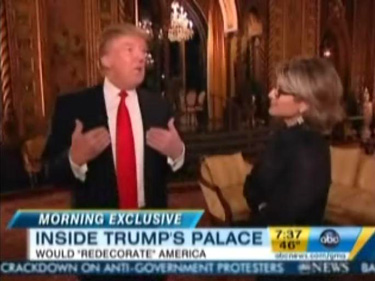 "And you saw [Trump] reaching out for a lot of that Tea Party support, wading into the birther controversy," observed Stephanopoulos, who has developed a penchant for trying to connect the right-of-center political movement to those who doubt President Barack Obama was born in the United States.

In his exclusive interview with ABC correspondent Ashleigh Banfield, the billionaire real estate mogul did in fact wade into the birthright citizenship issue, questioning why so few people seem to remember the president from his childhood.

Notwithstanding Stephanopoulos's attempt to muddy the waters, the fact remains that prominent mainstream conservatives have denounced birthers and ostracized them from the conservative movement. Take BigGovernment.com publisher Andrew Breitbart, who publically condemned World Net Daily Editor-in-Chief Joseph Farah's birther-riddled speech last February; and Red State editor Erick Erickson, who "excommunicated" birthers from his popular blog last year, telling them "Red State is not a place for you."

That Stephanopoulos continues to equate Tea Party activists with birthers reflects an unwillingness to admit the stark difference between the two groups: the former rejects President Obama's policies, the latter rejects Obama's legitimacy as commander-in-chief.

To her credit, Banfield did not conflate birthers with Tea Partiers.