For the second consecutive day, the CBS and NBC evening newscasts failed to devote more than fleeting news briefs to the fatal terror attack against a bus full of US airmen in Germany. ABC, which covered the story in more detail on Wednesday, did not even mention the tragic attack on the Thursday "World News."

Arid Uka, described as a 21-year-old "radical Muslim," opened fire Wednesday on US airmen at Frankfurt Airport, killing two and injuring others, but CBS anchor Katie Couric and NBC anchor Brian Williams spent a scant 30 seconds each on the story during last night's newscasts.

The night of the shooting, neither the CBS "Evening News" nor the NBC "Nightly News" thought the slaying of American servicemen was worthy of more than terse news briefs, although ABC's Diane Sawyer covered the story more thoroughly on "World News." 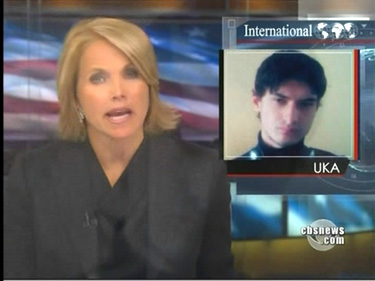 Katie Couric's brief report, which occurred more than 10 minutes into last night's program, is below:

We have new details about the suspect in the attack yesterday on a group of American airmen in Germany. It appears 20-year-old Arid Uka had a grudge against the US military. Sources tell CBS News that when he was arrested, Uka said "They are at war with us." Uka, a radical Muslim, opened fire on the airmen while they were in a bus at the Frankfurt airport, killing two and wounding two others. Investigators believe he acted alone and is not connected to any terror group.

The following is Brian's Williams's coverage, which was buried more than 12 minutes into Thursday's broadcast:

In Germany tonight, the 21-year-old accused of opening fire on a bus full of American airmen yesterday was taken to court today under heavy security. Two Americans were killed in the attack. German officials say the suspect has confessed. They say he may have been motivated by radical Islam, but he acted alone and is not connected in any way to a terrorism network that they know of. American military officials, however, say they are still investigating.