Over the weekend, Justin Gaertner, a wounded U.S. Marine veteran, came under fire because a New Yorker journalist mistook his tattoo for a Nazi symbol. The staff writer and fact checker, Talia Lavin, took to Twitter to condemn the man who now works for Immigration and Customs Enforcement (ICE) as a forensic analyst.

Lavin suggested in a since deleted tweet that Mr. Gaertner’s ‘Titan 2’ tattoo was actually a Nazi Iron Cross. The ‘Titan 2’ tattoo on his elbow is in fact the symbol for the Marine platoon Gaertner served with while deployed in Afghanistan. ICE said in a statement that Gaertner, who lost both legs in an IED attack, “continues to serve his country… helping solve criminal cases & rescue abused children.” 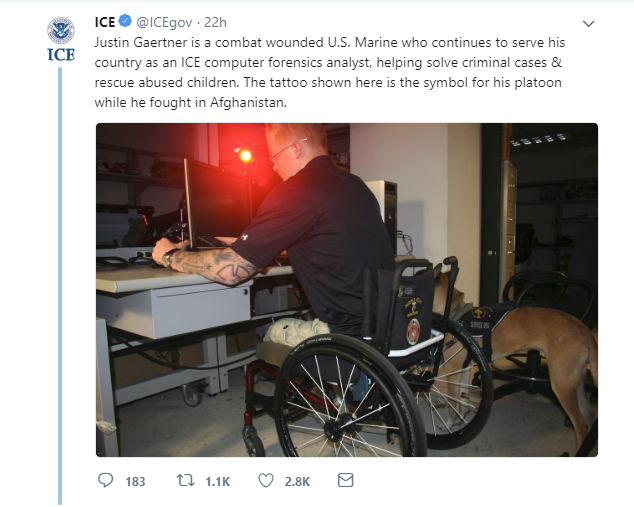 After backlash that their own fact checker did not check the facts, the New Yorker apologized in a statement to National Review:

“The New Yorker has just learned that a staff member erroneously made a derogatory assumption about ICE agent Justin Gaertner’s tattoo. The personal social-media accounts of staff members do not represent the magazine, and we in no way share the viewpoint expressed in this tweet. The tweet has been deleted, and we deeply regret any harm that this may have caused Mr. Gaertner.”

A member of the Anti-Defamation League even came to the defense of Gaertner in several tweets. Mark Pitcavage helped to set the record straight on the disabled veteran’s tattoo, replying directly to Lavin: 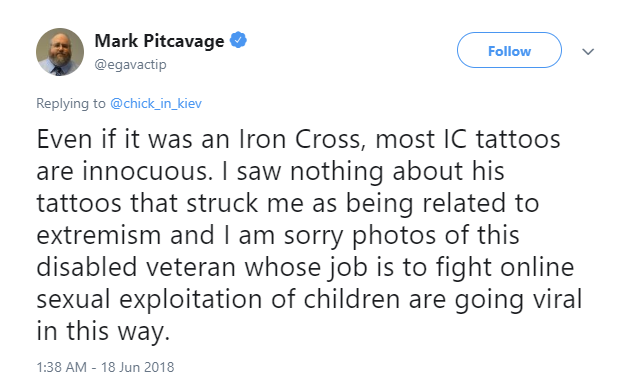