HuffPost: If You Support LGBT People You Can't Eat Chick-fil-A

Tuesday afternoon, the Huffington Post published an article calling on the LGBT community and its allies to boycott Chick-fil-A. The author of the piece, Noah Michelson, could not fathom how someone could eat such delicious chicken and not consider the consequences of their actions.

“People can be disturbingly indignant and defiant when faced with giving up their beloved chicken sandwiches,” he wrote. Later on in the article, Michelson cemented his view: “If you care about queer people ― or you yourself are queer ― you have absolutely no business eating at Chick-fil-A. Ever. It’s really that straightforward.”

Michelson’s main gripe with the immensely profitable restaurant chain is that their charitable donations are going to anti-LGBT causes. These causes include the Salvation Army, the Paul Anderson Youth Home, and the Fellowship of Christian Athletes. Apparently real bastions of anti-LGBT activism. Michelson continued his tirade:

“Yeah, I know, I know ― it sucks that we can’t have waffle fries. But you know what sucks even more? Not having equal rights and contributing to the profits of a company that wants to ensure you never do because it believes you’re fundamentally disordered or unnatural or sinful or some delightful combination of all three.”

Several people took to Twitter to call out the article, including members of the LGBT community that Michelson claimed to represent. 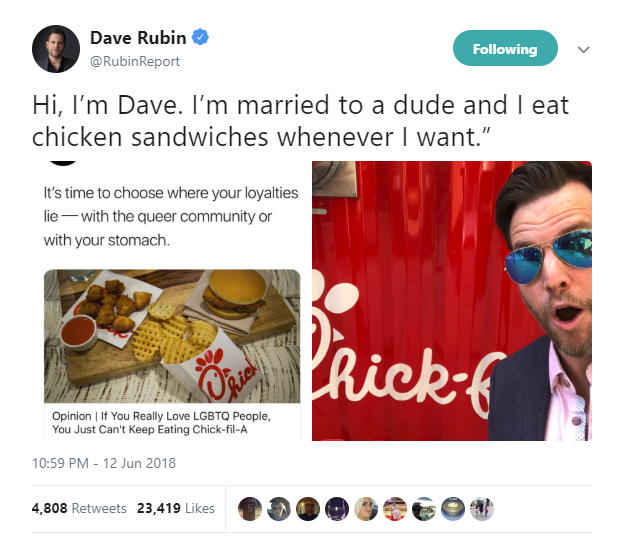 Michelson wants you to change the way you live and eat to fulfill his political agenda.