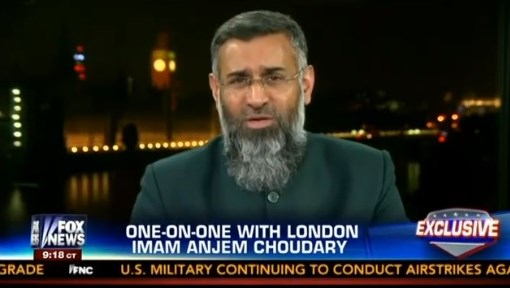 Instead of the British Broadcasting Corporation, I’m beginning to think BBC stands for the “Barely Believable Crap” channel, after comments were made by its Home Affairs Editor, Mark Easton, comparing radical Islamist/terrorist/hate preacher Anjem Choudary to the likes of Mahatma Gandhi and Nelson Mandela.

Where exactly, is the connection between Choudary, Gandhi and Mandela? According to Easton, it’s the “extreme views” and “challenge of values” by each of the aforementioned.

“It’s one thing to ban someone for inciting hatred or violence, but quite another to pass a law that silences anyone who challenges established values.

“History tells us that extreme views are sometimes needed to challenge very established values that people at the time hold so dear.”

It didn’t take long for people to express outrage and disgust over the comparison. Mark Hoda, chairman of the trustees at The Gandhi Foundation, said: ‘Choudary is someone who advocates hate and violence and justifies terrible acts, so I think it is an absurd comparison…Even though Gandhi may have been seen as an extremist at a certain time, his philosophy was non-violent. He was also accommodating of other views.”

Choudary on the other hand is known for being the front man for a radical Islamic group in which many terror attacks have been either carried out or plotted by members of his group.  Choudary is also seen (and as he claims) as the “single biggest gateway to terrorism in recent British history, and encourages the safe passage of British and European Muslims to Syria where they join Al Qaeda-linked forces.”

Likewise, Richard Caborn, a leading member of the UK campaign to free Mandela, said Choudary’s Al-Muhajiroun group was ‘against what (Mandela) stood for’.  He said, “I don’t think he would have been pleased with the comparison…He defended the armed struggle in South Africa but that was about economic sabotage. Both Mandela and Gandhi stood for universal suffrage, freedom of the individual and freedom of expression.”

The Clarion Project, an organization that encourages dialogue and challenges radical Islam, added, “It is ludicrous to compare Anjem Choudary, who promotes the most extreme form of Sharia law which denies entire segments of the population their basic human rights, to human rights champions such as Gandhi and Mandela…Choudary’s challenge of “established values” such as “rule of law, democracy, individual liberty, mutual respect and tolerance of different faith and beliefs” has arguably led to more British citizens joining ISIS or committing acts of terror than any other single individual.”

Even Choudary himself was appalled by the comparison! He wrote on Twitter, “The comparison with Mandela & Ghandi are false, they are kufaar heading to hellfire whilst I am a Muslim.”

A BBC spokesperson, in an attempt at damage control, released the following statement, “'The news story reflected the deep concerns over Choudhary and the extent of his influence and Mark Easton reiterated that point in his live broadcast. He then made a wider point that the definition of extremism can change over time…He was not suggesting that the views of Anjem Choudary will be thought of differently in the future and we believe this was clear to the viewer.”

It is said that Easton leaves the day-to-day breaking news stories to the larger teams at BBC, and sees himself as an “in-house BBC sociologist… sitting on a cloud looking down on the events as they unfold.”

If anything, it sounds like Easton has his head stuck IN the clouds.