Well, we know Chris Rock has a movie coming out next week.  He’s been making the rounds on different media outlets, talking about the issues of the day – recently talking race relations, the Ferguson verdict, even sharing his views about race in Hollywood in an article for the December 12 issue of The Hollywood Reporter.

In what THR calls a “Blistering Essay on Hollywood's Race Problem", Rock doesn’t hold anything back when talking about race relations in Hollywood, even comparing the Hollywood industry to that of the NBA:

“Just as the NBA is a black industry. I'm not even saying it's a bad thing. It just is,” he wrote.

“I'm not even saying it's a bad thing. It just is. And the black people they do hire tend to be the same person. That person tends to be female and that person tends to be Ivy League. And there's nothing wrong with that. As a matter of fact, that's what I want for my daughters. But something tells me that the life my privileged daughters are leading right now might not make them the best candidates to run the black division of anything. And the person who runs the black division of a studio should probably have worked with black people at some point in their life.”

Rock details his experience of entering Hollywood at the tender age of 19, under the wing of Eddie Murphy, and how successful he wanted to be – just like Murphy, his mentor: 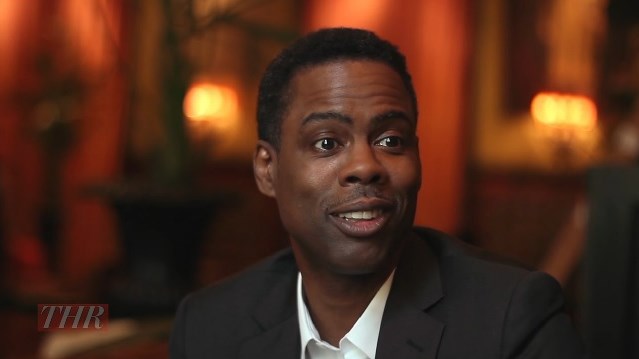 Wanting to give back to those who helped him, in a “pay it forward” kind of way, Rock then gives the difference between helping someone in the industry who is black, rather than someone who is white:

“…Some of these younger black guys just want me to see their act. Some come to me for advice…They want to know about agents and managers and the business; this kind of deal and that kind of deal; dealing with the media and dealing with family; money crap and where they should live. It's big brother shit, and they ask because there aren't that many black people to turn to. Who do you hire? Where's the big black PR agency? Where are the big black agents? Where's the big black film producer?”

Rock also explains how black women are limited in their roles:

“There are almost no black women in film,” he said. “You can go to whole movies and not see one black woman. They'll throw a black guy a bone. OK, here's a black guy. But is there a single black woman in Interstellar? Or Gone Girl? Birdman? The Purge? Neighbors? I'm not sure there are. I don't remember them.”

He then goes on to detail how Mexicans are treated in Hollywood –an acceptance of a “slave state” of sorts in Los Angeles:

“There's this acceptance that Mexicans are going to take care of white people in L.A. that doesn't exist anywhere else. I remember I was renting a house in Beverly Park while doing some movie, and you just see all of the Mexican people at 8 o'clock in the morning in a line driving into Beverly Park like it's General Motors. It's this weird town.”

“You're telling me no Mexicans are qualified to do anything at a studio? Really? Nothing but mop up? What are the odds that that's true? The odds are, because people are people, that there's probably a Mexican David Geffen mopping up for somebody's company right now. The odds are that there's probably a Mexican who's that smart who's never going to be given a shot. ... It's like, "We only let white people do that." This is a system where only white people can chime in on that…”

Rock then gives his opinion on what audiences want to see, and that there really is no difference between a white audience and a black audience when it comes to humor:

Rock states that there are usually (maybe) three movies with African-American leads in them a year, versus the 140 movies starting white people every year, and that those three black films are judged more harshly, and not many directors would take a chance making a movie inside the studio:

“The best ones are made outside of the studio system because they're not made with that many white people — maybe one or two, but not a whole system of white people. I couldn't have made Top Five at a studio. First of all, no one's going to make a movie with a premise so little and artsy: a star putting out a movie and getting interviewed by a woman from The New York Times. I would have had to have three two-hour meetings explaining that black people also read The New York Times. A studio would've made it like Malibu's Most Wanted…”

In addition to this essay, Rock has also been outspoken on race relations in America in USA Today:

"To say Obama is progress is saying that he's the first black person that is qualified to be president. That's not black progress. That's white progress. There's been black people qualified to be president for hundreds of years…The question is, you know, my kids are smart, educated, beautiful, polite children. There have been smart, educated, beautiful, polite black children for hundreds of years. The advantage that my children have is that my children are encountering the nicest white people that America has ever produced. Let's hope America keeps producing nicer white people."

As well as on Ferguson:

“Here's the thing. When we talk about race relations in America or racial progress, it's all nonsense. There are no race relations. White people were crazy. Now they're not as crazy. To say that black people have made progress would be to say they deserve what happened to them before.”