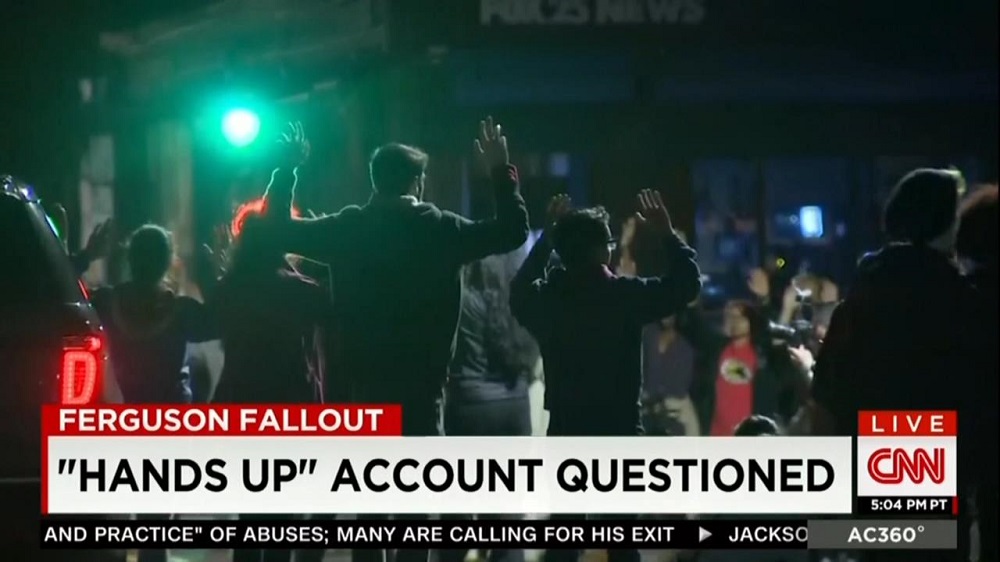 On Friday, CNN's Anderson Cooper 360 surprisingly spotlighted that the "hands up, don't shoot" narrative and chant forwarded by many left-wing supporters of Michael Brown's family is grounded in falsehoods. Correspondent Sara Sidner cited a recent Justice Department report that underlined that the mantra is "inconsistent with the physical and forensic evidence" and that "witnesses have acknowledged their initial accounts were untrue." [video below]

Host Anderson Cooper led into Sidner's segment by touting that the DOJ report "uncovered...racist e-mails...[and] schemes for, essentially, shaking down citizens – disproportionately African-American citizens...through fines and tickets and harassment." He continued by outlining how prevalent "hands up, don't shoot" became. He even referenced the biased moment where three CNN analysts made the accompanying pose on the air in December 2014:

ANDERSON COOPER: As you know, 'hands up, don't shoot' became the rallying cry in the wake of the Michael Brown shooting. Protesters chanted it on Ferguson streets. They shouted it in New York, and in cities big and small across the country. A number of CNN commentators sympathized with protesters along those lines. Professional athletes sparked controversy with the phrase. Members of the St. Louis Rams taking the field with their hands up – echoing what many believed Michael Brown did – that he had his hands up and was surrendering when Darren Wilson shot him. Many believed that; many still do. Justice Department investigators, though – they do not.

Sidner summarized the relevant parts of the Justice Department report. She also zeroed in on how some protesters, as well as Michael Brown's family, still cling to the false narrative:

SARA SIDNER (voice-over): What really happened the final moments of Michael Brown's life? The Justice Department investigation makes it clear: the evidence does not support the mantra still being used by some protesters. (clip of protesters chanting, "Hands up; don't shoot" outside the White House)

Instead, the Department of Justice found that is – quote, 'inconsistent with the physical and forensic evidence;' and in some cases, 'witnesses have acknowledged their initial accounts were untrue;' or witness accounts were not credible – including the witness closest to Brown when it happened – Brown's friend, Dorian Johnson, whose words helped spark the mantra.

DORIAN JOHNSON, WITNESS AND BROWN'S FRIEND: His weapon was already drawn when he got out of the car. He was shot again, and once my friend felt that shot, he turned around and he put his hands in the air and he started to get down. But the officer still approached with his weapon drawn, and he fired seven more shots.

ERIC HOLDER, ATTORNEY GENERAL (from press conference): Now, I recognize that the – the findings in our report may leave some to wonder how the department's findings can – can differ so sharply from some of the initial, widely-reported accounts of what transpired. America's justice system has always rested on its ability to deliver impartial results in precisely these types of difficult circumstances.

SIDNER: Despite the evidence laid out by the Department of Justice – that Michael Brown's hands were not up when Officer Wilson shot and killed him – the 'hands up, don't shoot movement lives.'

TEF POE, PROTESTER: We know for a fact that he's dead – whether his hands were up or not, he's not here, and he didn't have a weapon.

SIDNER (off-camera): But the argument is, that if he wasn't surrendering, then there's a justification, which is what the DOJ and – and the grand jury found-

TEF POE: Well, it's – there's – to me, that's a repetitive tactic that's been used against black males when dealing with the police for the longest. You – you can root back to slavery with that tactic, where you, kind of – you have to find a way to villainize the victim.

SIDNER (voice-over): But an attorney for Michael Brown's family points to witnesses in that same DOJ report who say Brown's hands were up briefly.

DARRYL PARKS, BROWN FAMILY ATTORNEY (from press conference): There's a (unintelligible) difference between hands over your head and hands up. And so, that's one, clear distinction that we have seen already as we reviewed the report.

SIDNER: The head of the St. Louis police union says the refusal to believe all the details in the investigation is an example of why the community and police can't see eye to eye. The gulf of distrust is as wide as it's ever been.

JEFF ROORDA, ST. LOUIS POLICE OFFICERS ASSOC.: It's not completely surprising. You know, it's become so ingrained in – in these protests, and in the minds of people who believe that something happened on August 9 that didn't. (clip of protesters chanting, "hands up, don't shoot")

SIDNER: Just today, a group of Ferguson protesters traveling to Selma still chanting the same mantra – but we did notice one difference. This time, their signs read, 'we can't stop now.' Sara Sidner, CNN, Ferguson, Missouri.

After Sidner's report, Cooper brought on left-wing CNN commentator (and former Obama "green jobs" czar) Van Jones for his take on the DOJ's findings. Jones acknowledged that "the facts don't bear out what many people feared," but also tried to shift the topic to the longstanding strained race relations between police departments across the country and African-Americans:

ANDERSON COOPER: Van, the fact that the Justice Department report said the narrative that Michael Brown had his hands up wasn't accurate – that 'hands up, don't shoot' – that chant that we heard constantly – from all evidence, that was not true. That did not happen. Isn't it important to acknowledge that?

VAN JONES, FORMER SPECIAL ADVISER TO OBAMA W.H.: Well, listen, I think it's important to acknowledge that some things are possible, and some things are provable. It is certainly not provable that Mike Brown had his hands up. And I think it's important for people who care about facts to – to be willing to talk about that in a straightforward manner. 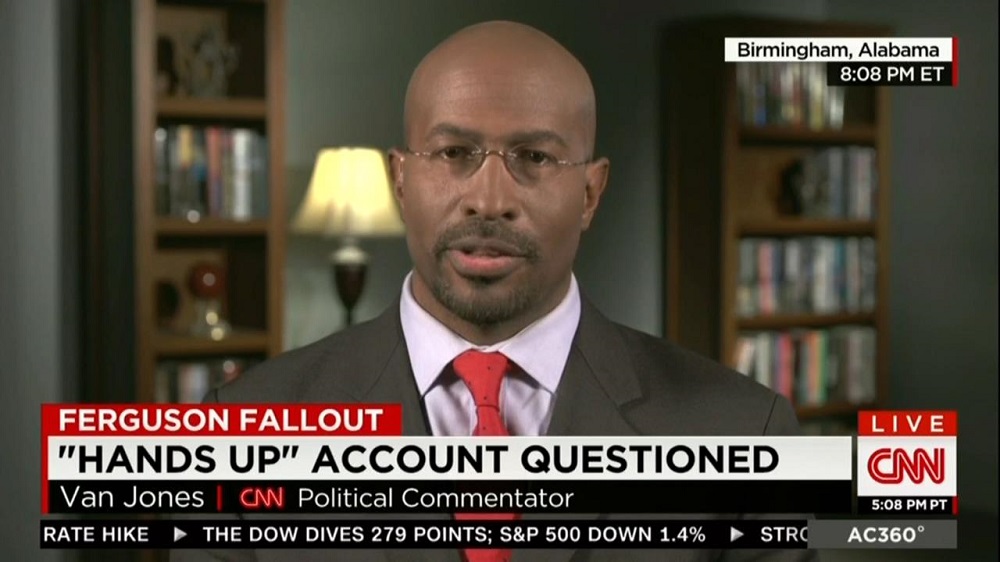 We'll never know what happened. Something strange happened. You did have that video of those construction workers who were white and watching. They put their hands up after the shooting, and said something happened that was wrong.

But much more importantly, this thing was about Mike Brown for about two weeks. After that, it became a cry of a generation that feels that it is criminalized and guilty until it's proven innocent, rather than innocent until proven guilty, all too often. And so, it became a rallying cry for a generation of people trying to say – look, we can be innocent. Just because we have black skin doesn't mean you should assume that we are guilty. Ninety percent of all African-Americans are not involved in crime as victims or as – as perpetrators. And so, I think it was a generational cry that we can be innocent. But I do think we have to deal with the facts. In this case, the facts don't bear out what many people feared.

On Thursday, the MRC's Kristine Marsh detailed how ABC, CBS, and NBC's newscasts used the "hands up, don't shoot" phrase 140 times in their coverage of the aftermath of the Michael Brown shooting. Yet, only CBS Evening News pointed out the key detail – that there was "no credible evidence Brown had his hands up attempting to surrender."