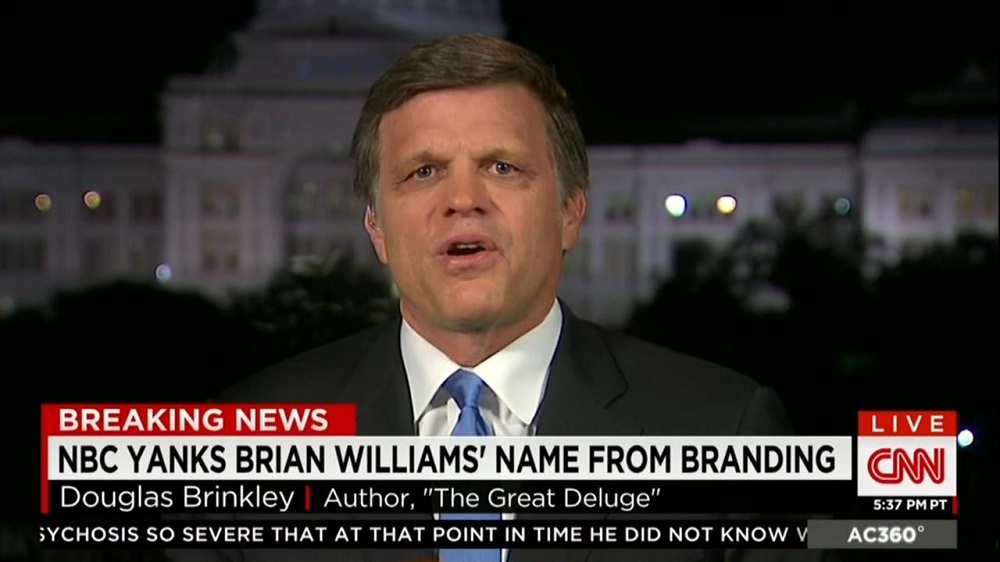 Liberal author Douglas Brinkley did his best on Wednesday's Anderson Cooper 360 to excuse Brian Williams's "embellishment" regarding his reporting of the immediate aftermath of Hurricane Katrina – mere moments after the CNN program spotlighted examples of the NBC anchor's questionable claims. Despite this reporting, host Anderson Cooper never confronted his guest over his own role in boosting Williams's statements in his Hurricane Katrina book.

Brinkley acknowledged that "the clips that you just played are a bit troubling," but asserted that "he was, really, very sick during these first days, and it might be part of the reason he was a bit confused...his reporting, overall, was stellar." He also expressed his hope that Williams would return to NBC News in some role: [video below]

DOUGLAS BRINKLEY: ...Look, he deserved the punishment he got – no pay and off the air for six months. But he could possibly come back in July, in August for the tenth anniversary of Hurricane Katrina. I think it's all going to depend on just how many examples of embellishment they – they discover. But I don't think Brian's done with being an investigative reporter. It's in his blood. He might end up getting a news magazine one hour at night on NBC. It may not be the trusted anchorman in the Walter Cronkite tradition.

But Brian Williams is a talent, and I think when you cherry pick all these bad moments and string them together, it looks – it's troubling. But he's had a long career, a lot of live-mike time, and a lot of really great work. And I hate to see him just sidelined and destroyed over this. Let's hope we can reform him, have – show a little bit of mercy. He's got to be going through a lot of misery this week.

Just before the segment with Brinkley, host Anderson Cooper aired a report from correspondent Randi Kaye, who detailed the "increased scrutiny," as Cooper put it, of the NBC anchor's statements about what he witnessed in New Orleans after the natural disaster:

RANDI KAYE (voice-over): Brian Williams reported in 2005 that he'd simply heard the story of a man taking his own life inside the Superdome.

WILLIAMS: We'd heard the story of a man killing himself falling from the upper deck.

KAYE: But he seemed to take it a step further last year, when he shared the Superdome story again.

WILLIAMS: We watched – all of us watched as one man committed suicide.

KAYE: NBC investigators will have to get to the bottom of that and more. In 2006, Williams said in an interview he'd actually seen a body float by him in the French Quarter after the storm.

WILLIAMS: When you look out of your hotel room window in the French Quarter and watch a man float – float by face down.

KAYE: But many have questioned if that were possible, because the flood waters barely reached that part of New Orleans. Could the water have been deep enough for a body to float by?

We asked the former general manager of the Ritz-Carlton Hotel where Williams had been staying. In the front of the hotel, she said, the water was a couple of feet – briefly – then quickly receded. And behind the hotel facing the French Quarter?

MYRA DEGERSDORFF, FORMER G.M., THE RITZ-CARLTON, NEW ORLEANS (from phone interview): The water might have been eight inches or so. It's – it's my perception that it would be difficult for a body to float in eight inches of water. I did not witness any bodies floating in the water.

KAYE (on-camera): We also checked with a hazard geographer, who compiled data on where victims of the hurricane were found. He told us no bodies were found in the French Quarter. The closest, he says, was recovered 0.36 miles away. The odds of that body being the same one Williams says he saw – highly unlikely, says our geographer.

KAYE: These pictures from a church newspaper do show water around the Ritz-Carlton after the storm – even a boat. But the man in charge on the ground, Lieutenant General Russel Honore, has his doubts about a body floating by.

GENERAL RUSSEL HONORE: By and large, that water – that was well below knee level around the – around the Ritz-Carlton.

KAYE: And what about those gangs Williams said stormed his hotel?

WILLIAMS: Our hotel was overrun with gangs.

KAYE: The news man had told his story to Douglas Brinkley – that he was sick from drinking sewage water, and slept on a mattress in a stairwell. That's where he said he'd heard armed gangs breaking into the hotel, brandishing guns, and terrorizing guests. But Williams gave a different account to this associate professor at LSU for her book about Katrina – telling her he'd slept in his room.

JUDITH SYLVESTER, ASSOC. PROF. MASS COMMUNICATION, LSU: He was worried about people gaining entry into his room, and he told me at that point that he slept one night between the bed and the wall, so that if anybody opened the door, they would think the room was unoccupied.

Cooper then turned to Brinkley, as well as media research Andrew Tyndall, for their take on the Williams scandal. Despite Kaye mentioning how the NBC journalist "told his story to Douglas Brinkley" for his book on Katrina (which Cooper complimented as a "remarkable book, if you haven't read it"), the CNN anchor did not confront his guest about those claims. Instead, Cooper gave Brinkley the kid glove treatment. The liberal author took the opportunity to make excuses for Williams:

ANDERSON COOPER: Doug, I mean, I know you give Brian Williams, obviously, certain amount of doubt – or the benefit of the doubt when it comes to Katrina reporting. Do you also think he had an embellishment problem?

DOUGLAS BRINKLEY, AUTHOR, "THE GREAT DELUGE": Yes. The clips that you just played are a bit troubling. That's embellishment. I don't think he saw somebody commit suicide at the Superdome. But he broke the story there, and saw the – you know, the hole in the roof. I don't think a body was, per se, floating by the Ritz-Carlton. But there were plenty of people – and I was there for Katrina – plenty of bodies around the sea. Some were even being chained to places, but it was more central city – maybe way up Canal [Street]. The problem is, could you have seen it from the Ritz-Carlton? Hence, people are asking questions.

I do know Brian Williams was very sick with what he calls dysentery. It certainly was a dysentery-like condition. I interviewed Heather Allen and many others – Jean Harper from NBC – who all testify that he was, really, very sick during these first days, and it might be part of the reason he was a bit confused. But I think his reporting, overall, was stellar.

COOPER: And – and the stories of the armed gangs overrunning the Ritz-Carlton: what do you make of that?

BRINKLEY: 'Gangs' becomes a heavy word, but there were people – there was a great fear. The French Quarter Ritz-Carlton was black – darked-out. Nobody knew where anybody was, and there was a lot of fear in the air. We forget that it was a big unknown – what was going to happen. So I believe the fear of the gangs was real, and when you hear boots chomping – you know, clomping down the hallway, and somebody says they see people with guns. But if we have a vision of a huge gang, it's probably less likely than a few people that were looting, or maybe simply looking for a place to sleep or looking for food and water.

Nevertheless, Brian was in the eye of the storm. He was down there and everybody's confused. It's a cliche – 'fog of war,' but people had it at that time. I think we've got to give Brian a little bit of the benefit of the doubt. Although, NBC owes it to us to inventory all these things, and get us some answers.

Just before Brinkley endorsed the suspended journalist's return, Tyndall contended that Williams would not return to the air: "I don't expect him ever to sit in that anchor chair again. You can't give this severe a punishment to somebody, and then say at the end of six months – oh, everything is back to status quo again."