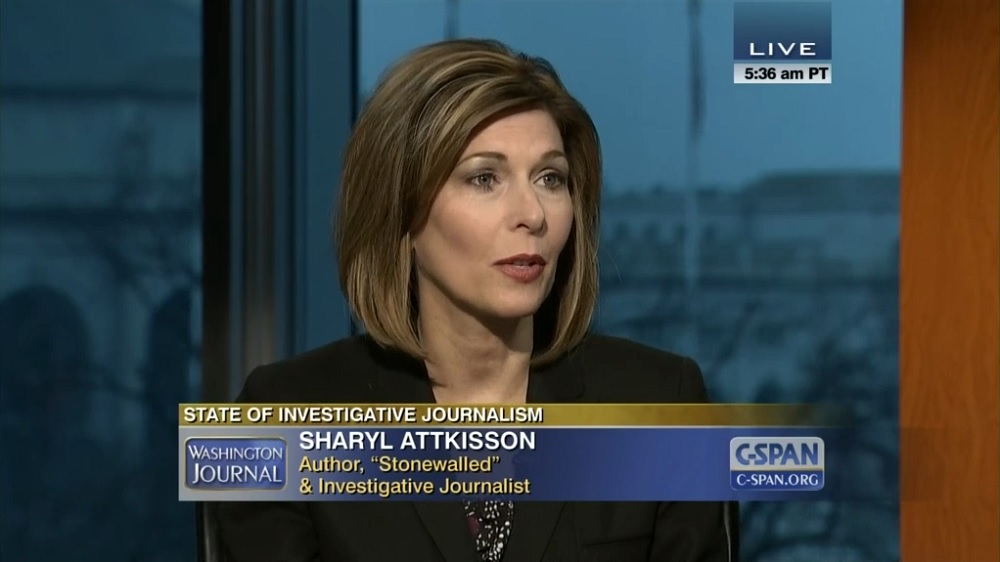 Fox News's Howard Kurtz reported on Monday that former CBS correspondent Sharyl Attkisson filed a lawsuit against the Justice Department and the U.S. Postal Service over the hacking of her computers. Kurtz noted that Attkisson "alleges that three separate computer forensic exams showed that hackers used sophisticated methods to surreptitiously monitor her work between 2011 and 2013." The journalist seeks $35 million in damages against the federal agencies.

The Fox News host later pointed out that Attkisson and her lawyers claim to "have 'pretty good evidence' that these efforts were 'connected' to the Justice Department." The correspondent asserted that she was "caught in a 'Catch-22,' forcing her to use the lawsuit and an administrative complaint to discover more about the surveillance through the discovery process and to learn the identities of the 'John Does' named in the complaints."

On her own website, Attkisson outlined that she filed "administrative claims under the Federal Tort Claims Act against the U.S. Department of Justice, the U.S. Postal Service, and certain unnamed employees and/or agents of the federal government." She added that she had "filed a lawsuit in the District of Columbia alleging certain violations of her constitutional rights based on information implicating the federal government in illegal electronic monitoring and surveillance of her home and business computers and phones from 2011 to 2013."

Back in May 2013, the then-CBS journalist revealed that her personal and work computers had been hacked, and indicated during an interview with a radio station in Philadelphia that "there could be some relationship between these things and what's happened to James [Rosen]," who also had been investigated by the Department of Justice for his reporting about the CIA's intelligence on North Korea. Three weeks later, CBS News confirmed, via an investigation by an outside cyber security firm, that "Attkisson's computer was accessed by an unauthorized, external, unknown party on multiple occasions in late 2012. Evidence suggests this party performed all access remotely using Attkisson's accounts."

Anchors Gayle King, Norah O'Donnell, and Charlie Rose interviewed Attkisson about the hacking on the June 17, 2013 edition of CBS This Morning:

GAYLE KING: ...Sharyl, what was happening with your computer that made you suspicious?

SHARYL ATTKISSON: Well, Gayle, there were signs of unusual happenings in my home for many months, and that included odd behavior of both my work and my personal computers. One example was the computers began turning themselves on, and then, back off again during the night. I was able to verify and obtain some information on the suspicious activities, and I reported that to CBS News management in January, since it included CBS equipment and systems. CBS then hired an independent cyber security firm, which conducted a thorough forensic analysis, and that ruled out the ordinary malware fishing programs and that sort of thing.

NORAH O'DONNELL: So Sharyl, you have been reporting on Benghazi. You did some of the groundbreaking work on the 'Fast and Furious' program. What exactly did the intruder do or what were they were looking for, do we know, on your computer?

ATTKISSON: Well, with the investigation continuing, we can't all the details, but the analysis found very unusual activity buried deep in the computer. The unauthorized party accessed the CBS computer in my home on multiple occasions. And specifically, in December, they used sophisticated methods to cover their tracks – meaning, they tried to remove the indications of their previous unauthorized activity. And we're not prepared to talk more about the who's and who did this today, but the intruder is considered highly skilled and used very sophisticated methods.

The journalist later decried the "very serious and disturbing matter," added that she was "outraged that anyone would do such a thing."

Attkisson would go on to accuse the federal government of hacking her computers in her 2014 book, "Stonewalled: My Fight for Truth Against the Forces of Obstruction, Intimidation, and Harassment in Obama's Washington."