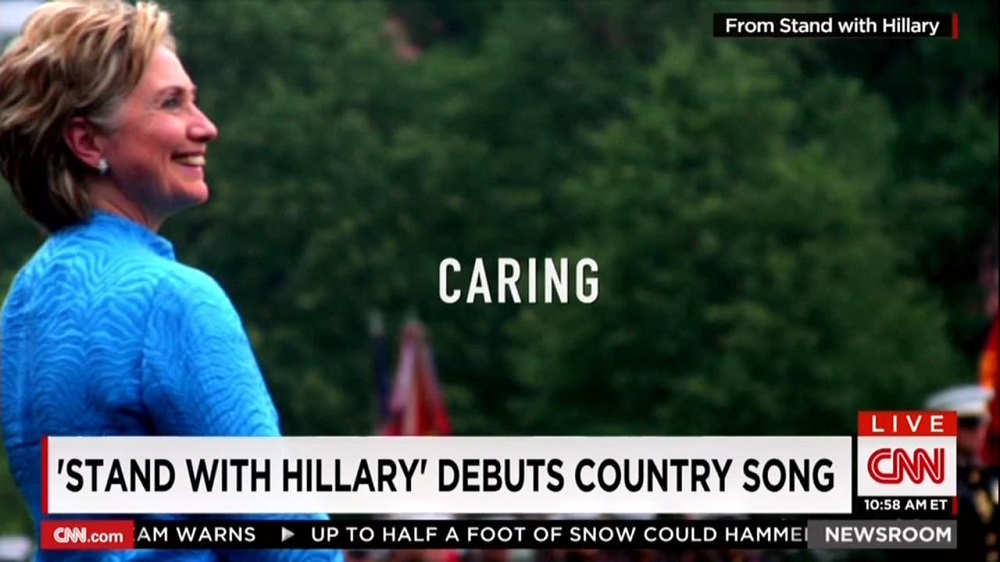 On Monday's CNN Newsroom, Jeanne Moos zeroed in on the largely-negative response to a pro-Hillary Clinton super PAC's music video-style ad, which features a country music song about the former First Lady. Moos wasted little time before reporting that "at least one website warns, 'This pro-Hillary cowboy anthem will make your ears bleed.'" [video below]

Anchor Don Lemon introduced the correspondent's segment by wondering, "What do Hillary Clinton and a hunky cowboy and a lousy melody have in common? Of course, Jeanne Moos has the story." Moos, who is known for reporting on lighter subjects, spotlighted the many thumbs-down reviews from online commenters. She also gave some background on the people behind the music video:

JEANNE MOOS (voice-over): Please do not adjust your calendar – though you might want to adjust your volume, since at least one website warns, 'This pro-Hillary cowboy anthem will make your ears bleed.'

UNIDENTIFIED MAN (singing, from Stand With Hillary super PAC ad): It's 2016, and this time I'm a thinking guys, put your boots on and let's smash this ceiling.

MOOS: That would be the glass ceiling the first woman in the White House would break. This first campaign song of 2016 features a country hottie, cruising past farm equipment; leaning on a barn; wearing a hard hat – which he'll need to protect himself from critics, who wonder, 'Could this Hillary Clinton tribute be the worst political song ever?' 'My face while watching the new Stand with Hillary country tribute song.' And this back-handed insult from Slate: 'The video does not appear to be a joke.'

UNIDENTIFIED MAN (singing): She's a mother, a daughter, and through it all, she's a loving wife.

MOOS: First, we should say Hillary Clinton had nothing to do with this song, and her people wouldn't comment on it. It was created by a super PAC called 'Stand with Hillary.' The writer is known for songs written for Barack Obama in 2008 aimed at Hispanic voters. (clip of pro-Obama ad by Nueva Vista Media) Now, he's gone county – as one blog noted with 'the symbolism and music of a Chevy commercial.' Come on! That's no Chevy! Our cowboy drives a Ford!

Who is our cowboy anyway? The chairman of the pac told CNN he wants to remain anonymous, and the PAC prefers the focus to be on the message. But even his biker wife is giving him the head-to-toe once-over. He may not ride, but his T-shirt rides up.

UNIDENTIFIED MAN (singing): Now, it's time for us to stand up with Hillary.

MOOS: Giving a flash of flesh that may win over the cowgirl vote. Jeanne Moos, CNN, New York.

The "Chevy commercial" reviewer – Ben Domenech of The Federalist blog – asserted that the ad "has all the earnestness and inauthentic purpose of everything about the early Ready For Hillary 2016 effort." Domenech later added that "the attempt to pander to the white working class voters left out by the Democratic agenda for so many years is obvious and clumsy, but also revealing...The desperation to win back voters who like this sort of music is blatant, and I expect we'll only see more of it in the coming months."